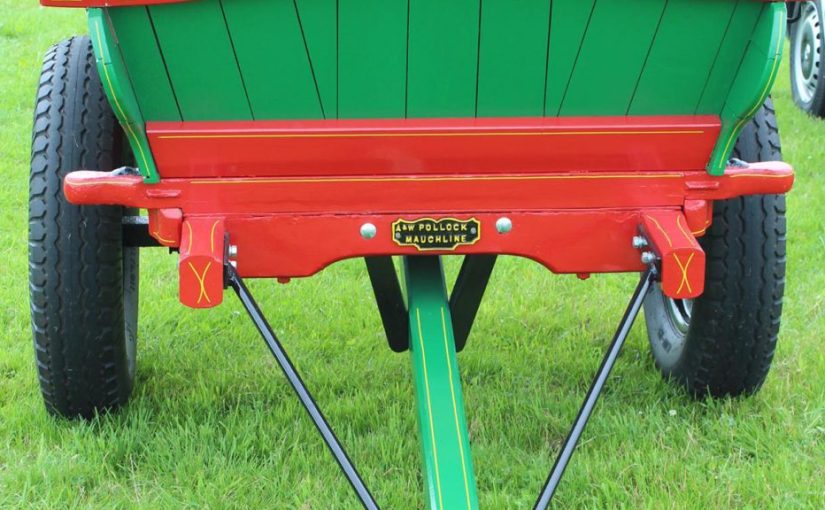 The Ayr Show as important not only for local makers but also those coming from further afield, especially in Glasgow and Edinburgh. It was also attended by some of the major English makers such as John Fowler & Co., Leeds.

The west of Scotland newspapers, including the Ayrshire newspapers and the Glasgow herald published extensive accounts on what was exhibited at the show. The agricultural newspapers such as the North British agriculturist also published accounts.

An informative account of the implement department at the 1882 show was published in the Glasgow herald of 26 April 1882. It provides context to the display, including numbers of exhibits, trends between the years (1882 was at the start of a long agricultural depression), changes to the awards system for implement makers as well as what was on display. It is worth quoting at length for the amount of detail it provides:

“Although the exhibition of implements is one of the most interesting to farmers as connected with the cultivation of their land, it has never had much attraction for the general public, and the attendance yesterday, though not smaller than on any previous year, could not be said to show any advance. Those who passed up and down the yard were almost all farmers who had an eye for the practical, and were either on the outlook for some particular implement, or were scanning the different stands in the search after new inventions. For the past few years there has been gradual decrease in the entries in this department, but this is easily accounted for when the depressed state of agriculture is considered, and the inability of the farmer to do more than purchase what was actually required to carry on farming operations. In 1879 the implement entries were 931, in 1880 they were 816; and last year 786; while this year there is a further reduction, and the number now stands at 748. No doubt this is caused by the withdrawal of many of those exhibitors who dealt in fancy articles, and who chose such gatherings as splendid opportunities for doing a goodly stroke of business. Whether they have been disappointed in their expectations we cannot tell, but the fact remains the same, and the display, so far as the real merits of the exhibition are concerned, is none the poorer for their absence.

Another feature in implements for the past few years in the absence of all novelties. That some of the makers are busy on new implements we knew, but the times are not such as to hasten the production of these, and hence those placed in the yard yesterday were, with one or two exceptions, well-known and tried machines with minute alterations which have been suggested by practical experience. Another thing which strikes the visitor is the absence of some of the well-known English makers, who are allowing their goods to be brought before the farmers through their own agents. There is still another matter which affects makers more particularly, and that is the issue of medals to exhibits. In deference to the wishes of the makers the association decided to give no such awards, and this was carried out for a year or two, but when the committee came to draw up the premium list this year, it was stated that a desire had been expressed that some medal should be given for special new inventions. This was agreed to, and accordingly the notice was appended. This came under the notice of the committee of the Scottish Implement Engineers’ Association, and strong remonstrations were then made that this was really taking a step backwards, and losing the ground which had been already gained. These were duly considered by the committee of the Ayr show, to whom it was explained that the engineers wished trials to which, if desired, medals or prizes might be attached, but that they had no desire for medals without trials. It was further asked, if the committee decided to go in for trials that they give three years’ notice of the implements to be so tested, so that every opportunity might be given for the production of the best implement. After full deliberation, it was agreed to depart from the announcement made in the premium list; and at the same time, we believe, a feeling was expressed that they might enter on the new field of testing implements by another year. This decision satisfied the members, and prevented what at one time threatened to bring about a rupture of those friendly relations which have always subsisted between the Ayrshire association and the implement makers.

Coming to look at the exhibits as laid out, the largest display is that of Messrs Alexander Jack & Sons, of Maybole. This firm has made a name for itself for the manufacture of the Buckeye reapers and mowers, but this year they have introduced a new feature, and have brought out a potato digger, for which they augur great success. In carts and lorries they stand almost foremost, and as usual a large number of these are on the ground. Close beside this stand is the broadcast sowing machine of Mr Thomas Turnbull, of Castlebank, Dumfries. It is on the well-known principle illustrated by Mr Benjamin Reid, of Aberdeen, and is placed on a swivel to assist removal from field to field. Adjoining this is a large stand filled by Mr Jas P. Cathcart, of Glasgow and Ayr. It is filled with a collection of useful agricultural implements, chief among which are several of Mr Walter Wood’s enclosed gear two-horse mower. One fault with this machine was the short knife bar. In this machine a longer bar has been put in, and there is also added an improved reaper attachment. It was expected that this firm would exhibit one of their sheaf-binders, but as the Highland Society have offered a special premium for these machines it has been decided to keep it back till that time, so that all the improvements suggested by experiments may be added. Mr Cathcart also exhibited Gray’s pulverising plough, which looks a useful implement, and one likely to perform well the task for which it is designed. There is also in this stand one of Black’s improved box churns with a perforated division, which is said to greatly quicken the process. The inventor says, that “the peculiar construction of the breaker throws the milk with great force through the perforation, breaks up and extracts every particle of butter in a remarkably short time, and in a manner quite unequalled by any former invention.”

At the end of the field, among machinery in motion, is one of Messrs Jeffery & Blackstone’s new stone mills for grinding and kibbling, exhibited by Mr Robert Wallace of Whitletts, and driven by one of Messrs J. & T. Young’s engines. These grinding mills are fitted with stones instead of iron grinders, and being mounted on a horizontal spindle are thus made to run a vertical direction. The makers contend that it can be driven at double the speed of the ordinary mills, and there can be no doubt that it was performing excellent work yesterday. Messrs W. N. Nicholson & Son, Newark-on-Trent, show an improved Gardner single-action turnip-cutter, which is fitted with a patent arrangement said to insure the last piece being cut. Passing along to the stand of Mr Thomas Hunter, of Maybole, we find a very large collection of implements, among which is noticeable the well-known turnip-topping and tailing machine. There is also a new machine which has been tried once. It is called a “Dunlop three-drill plough”. When preparing the land for potatoes with a single plough, one of the horses passes along one of the furrows, and, by making deep indentations in the bottom, destroys the surface for planting, and often leads to irregularities and blanks. With this implement the horses walk in front of the ground to be turned up, and in this way an even bottom is left for the seed potato. It is calculated that one pair of horses can go over about nine or ten acres a-day with the machine. Mr Dunlop, who has assisted Mr Hunter with the invention, has tried the machine, and he is satisfied that it will save a good deal of labour, and prove very effectual.

Not far from this stand is another novelty exhibited by Mr Thomas Reid, Monkton Miln. It is described as a “Patent combined machine or implement that will open three drills at once for farmyard manure, or open two drills, sow light manure, and cover at same time eight acres a-day. Turnip or other seeds can be sown at same time-all with one pair of horses. Also, plant potatoes, whole or cut, and cultivate and raise root crops.” It has two drills in front, with manure boxes above. As the machine moves it causes a central roller to revolve, and this carries the manure down and allows it to fall to the ground. Then the three mould boards follow, and cover up the manure, and behind these again are placed three turnip sowers, thus performing three operations at once. The inventor also claims that by removing the manure boxes and substituting potato planters he can accomplish a large amount of work with little expenditure of horse-power. So far the machine has not been thoroughly tested, and though the theory is good it would be unwise to speak too confidently of its merits. Messrs John Wallace & Sons, Glasgow, have a goodly representation of their machines on the ground. This firm was the pioneer in potato diggers, and their machine has stood every test applied to it, and has been so successful that not a few of those being manufactured are practically on the same principle. Their reapers have also undergone some minute alteration, which improve their usefulness. Messrs Wallace also showed an Anglo-American chilled plough, for cross ploughing red land or stubble. This implement is remarkably simple and light, and the English makers have improved on the American model by broadening the front wheel and lowering it slightly, so as to meet the irregularities of the land. The other stands are well worthy of a visit, but they contain no novelties, though filled with implements which have been long usefully employed on many farms.”