The county agricultural surveys published by the Board of Agriculture and internal Improvement from 1793 to 1817 provide a great deal of information on agriculture and the rural economy. 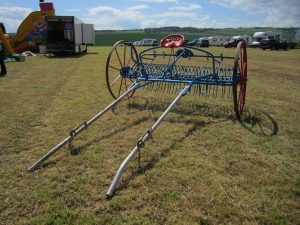 A number of the surveys provide account of the hay harvest. They show what it was like to harvest the crop at that time, but also highlight the continued traditional practices that continued into the nineteenth and twentieth centuries. Below are a small selection of accounts of haymaking.

From Argyll in 1798:
“Hay is made in this county by spreading and turning it through the day, and gathering it into small coils at night, and so on till it is made, or rather more than made; for it is a common error to dry it too 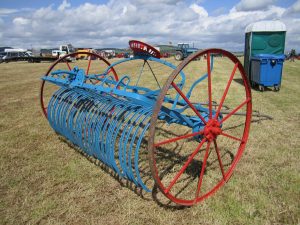 much. in this way of making hay, it is difficult to preserve the colour, juice, and flavour of it. The following method which is easier and better, has been found to answer well, especially with clover and ryegrass. The hay is cut when dry (though this is not necessary), and immediately shaken into small coils; each about the size of a bee-hive; and then with a sweep of the hand the tails gathered under it, so that it gets the shape of an egg standing on the large end. In this way, if the weather should be wet, the rain will run off; or,if it should go through the coils, they will soon dry, as they are so small. After two days, if the weather has been favourable; or when they are found in condition, every two are made into one, of the same shape, taking care to put the surface of the old in the bottom and heart of the new. In this state they may be left till they are found to be fit for 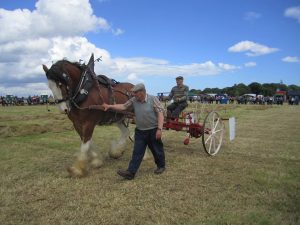 being made into cocks. Hay has been made in this manner without any trouble, even in broken weather; and so as to retain its colour, scent,a nd juice, much better than by spreading it in the usual way.
Some preserve their hay in barns, and some in stacks. In either case, it should always be cut with a hay-knife, or hay-spade, and not pulled; as the pulling will deprive it of the greatest part of the heads and seeds, which are the best of the hay.” 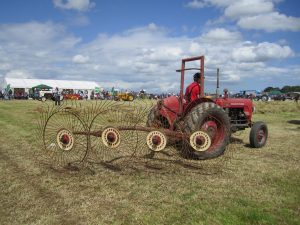 “When the weather is good, and the grass is cut dry, it is allowed to remain in the swath for a day or two. After this, it is put into small cocks, which are left to stand just as long as it is found requisite for drying it sufficiently in order to its being formed into ricks in the field. The ricks generally contain from forty to a hundred stones of hay. In this state the hay usually continues till it is judged fit for keeping, when it is carted home, and built in stacks, which are covered with thatch tis cure them from rain.” 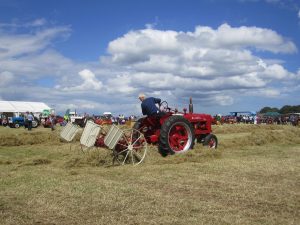 “There are many ways of working hay in this county, but the simplest and least expensive daily gains ground. It is cut with a scythe, but, instead of being instantly put into small cocks, or tossed loosely about the field, as was once the case, it is suffered to remain in the swath of two days or three, according to the state of the weather, and then turned so carefully as to discompose its natural order and regularly as little as possible. After another day, or two at most, in dry weather, it may be turned again in the forenoon, or let alone as circumstances require, and put up in small ricks in the evening, to stand for six or eight days, or perhaps longer, and then stacked. In the swath, it resists rain much better than in any other form, preserves its colour, retains its flavour, and by being made ready more slowly, is both a weightier and more nutritive crop.

Natural or meadow hay, being of a softer and more flexible nature, and cut latter in the season, is more apt to be compressed together by damps and showers, and not so easily put into a state of preservation. It is often carried from the place to place where it grows to some dry knoll, more exposed to the sun and winds, where it is spread out every morning,a nd collected every evening into larger cocks. In the best weather, it requires near fortnight’s labour; and in rainy seasons, much more. As it only grows in irregular patches, seldom if ever in large fields that have been measured apart, and is not sold or weighed, the average produce of an acre can only be stated, by conjecture, at 150 stone.
Hay stacks are sometimes built round, with a conical top, but more commonly in an oblong form, shaped and drawn together above like a house. They are thatched with straw or rushes, neatly bound down by ropes of straw or hay, crossing each other diagonally, and making the whole covering of one piece, which will resist the force of every blast during winter.” 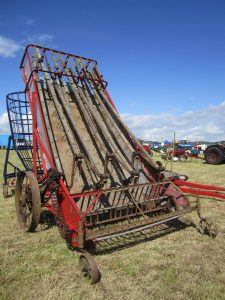 “The quality and value of the hay crop, is in the county of Ayr, very much injured by the grass not being cut in due time. … As meadow or lea hay, is composed of a congeries of different grasses and plants, some of them much earlier than others becomes more difficult to fix the proper period for cutting. Before some of the species of grass are ready for the scythe, others are ripe and withered. But in a crop of ryegrass, which is comparatively the only hay in Ayrshire, the proper season for cutting may easily be fixed; and the whole field will be equally ready. The necessity of raising seed, and the high price obtained for it, has tempted many to injure their hay by allowing it to remain by far too long uncut.

Ryegrass when it is cut, is tied into sheaves, which are set up to dry like oats; and it is generally threshed before it is stacked. I know no better method than that of treating it in the fields. But the slovenly, and sometimes those that are more industrious, frequently allow it to stand by far too long exposed to the weather, before it is put up into large ricks or stacks. In a quarter of the country where such copious rains generally fall, during the month of August, the utmost exertions ought to be made, to have it secured before these rains come on. …
The whole art of haymaking consists in exposing the grass to the sun and winds, and preserving it, as much as possible, from dews and rains, until it is completely cured. The sooner is exposed to the sun, and the more frequently until it is dry, the more valuable will be the hay; and vice versa. Allowing the hay to sweat, or in other words to come under the process of fermentation,is folly in the extreme. We know how unpalatable and acrid a taste, is acquired by grain that has been heated in the stack. Hay or fodder, that has come under the process, is no less injured, and as unpalatable to cattle, as now-burnt grain is to the human taste. 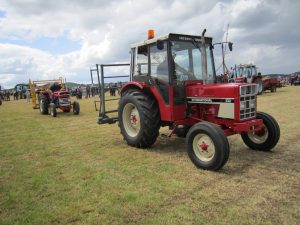 “Rye-grass is the species universally sown;a nd even where red clover is the principal crop, a portion of ryegrass seed if always sown along with it. … When the grass is made into hay, it is commonly mown in the month of July; that which is reserved for seed being allowed to remain a week or fortnight longer. The mowers get from 3s to 5s per Scotch acre, according to the weight and state of the crop. Sometimes they work by a day’s ages, and receive 2s, with victuals and beer. The grass is first turned in the swathe, and if the 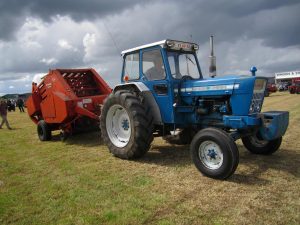 weather be dry, a day or two after it is put into small round cocks. In adverts weather, hay-making is a very tedious and expensive process, and it is sometimes half rotten, and its value much diminished, before it can be saved. But in favourable weather, it is generally secured in the tramp-pick, of from 40 to 50 stones, within four or five days after it is cut. After all the hay is thus secured, it is carried to the stack-yard, and put up in long stacks called sows, which are neatly thatched, and the thatch fastened with straw ropes.
The produce is exceedingly various, from 100 to 350, or 400 stones the Scotch acre. The average may be from 150 to 190 stones of 16lb avoirdupois, and 22 oz to the pound..”

Hasn’t the hay harvest changed over the years?

The photographs are from the Fife Vintage Rally, June 2014.