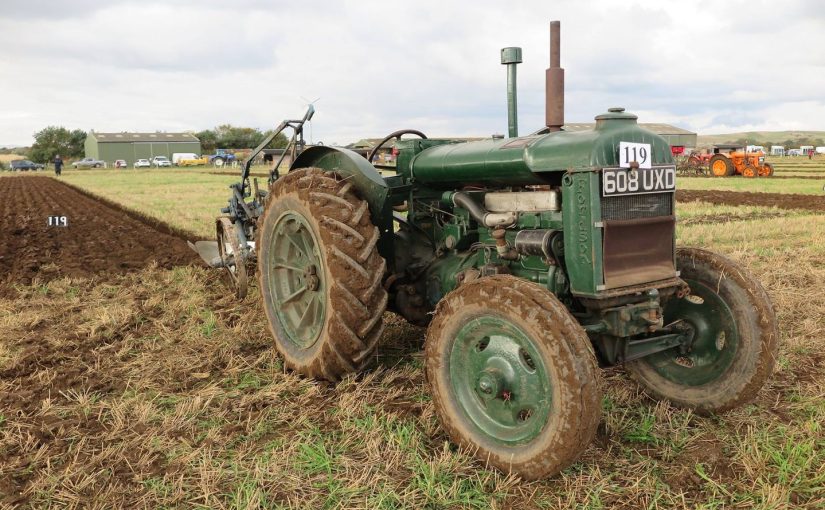 The Highland Show in 1924 was held at Perth, in the Perth Show District, one of the 8 show districts. The Perthshire advertiser looked back at the show held in Perth in 1904 when it had been last held there. It noted that this was the first show “where motors and motor tractors were first seen”.

Let’s see how it referred to that show of 1924 and the upcoming one of 1924 in an article from 2 February 1924: “Owing to circumstances which are well known, the Highland and Agricultural Society’s annual show was held in the county town of Fife in 1912, when, in its ordinary rotation, it would otherwise have been held at Perth.

The great national show to be held on the South Inch, Perth, on 15, 16, 17, and 18 July, ought therefore, to be invested with more than ordinary interest, as no fewer than twenty years have elapsed since the great exhibition was formerly held at this centre.Perth is recognised as one of the most convenient, as well as being one of the most lucrative, centres at which this show is held. It is of interest also to recall that the secretary of the Highland Society, Mr John Stirton, MA, is a Perthshire man, belonging to a well-known farming family in the Stanley-Bankfoot district, where a brother, Mr William Stirton, to day carries on the family tradition. Many of the outstanding directors of the Highland and Agricultural Society have been Perthshire proprietors and farmers, and the show held at Perth have always been marked by unusual enterprise and excellent organisation.

The show this year will be the tenth held by the Society at Perth, the first of whose shows was held at Edinburgh on Thursday, 26th December, 1822. At the first venture the premiums amounted to 10 guineas all told, 5 guineas for first and 2nd prizes for pairs of oxen of the Shorthorn breed not exceeding four years; of the Aberdeenshire breed not exceeding three years; and of the Angus, Fife, Galloway, and West Highland breed not under four years. At the coming show in July the prize list amounts to between £5000 and £6000. From the “Transactions” of the Highland and Agricultural Society we read that “The Society has had few more successful shows than that which took place at Perth on the 19th, 20th, 21st, and 22nd July, 1904. The South Inch, given free with a supply of water by the city of Perth, formed an ideal showyard in every way.

Nowadays the implement section of the Highland is an immense exposition in itself. It was at the Highland Show in July, 1896, that the first exhibition was given of a road motor seen in Scotland. Then at Perth, at the 1904 show, an equally notable feature was the first show yard appearance in Scotland of motors designed for field work. A writer of the day says:-“There would seem to be little room for doubt that motors have come to stay”. He was a shrewd observer of events. The motor tractors exhibited in July underwent practical field trials in September. In the showyard the motors were exhibited hauling reaping machines and waggons, and “their appearance excited much interest and favourable comment among visitors. It may, indeed, be said that the ease with which the motors were worked and manouvered in the parade ring tended to remove any unfavourable impression that may have existed in the minds of those who have been reluctant to contemplate the introduction of mechanical haulage other than at present in vogue for field work. In these days of keen competition it is more than ever necessary that work of all kinds should be executed as quickly and as cheaply as possible, and, in the agricultural motor, even in its present stage, there appears to be a machine which will assist towards the desired end.”

The practical trials of the motors in the cutting of corn and ploughed land took place at the late Mr W. S. Ferguson’s farm of Pictonshill, near Perth, on September 15th, 1904, “in the presence of a fairly large company of deeply interested agriculturists”. The motors tested were “The Ivel” and “The Scott”. Since then, of course, motor tractor implements have undergone nothing short of a revolution, but these early motors made a big impression at the time, and the improvements that have taken place may be said to have been built upon the foundations which in these early days were well and truly laid.

The report concludes: “Taking the trials as a whole, they were in every way a success, and in recognition of the substantial progress which the makers had made in bringing out a thoroughly useful agricultural motor, the Committee awarded one of the Highland and Agricultural Society’s gold medals to each of the two exhibitors.” The Highland and Agricultural Society is to be congratulated on the encouragement it has invariably given inventions and manufacturers of agricultural implements to carry on the good work of reducing farm labour costs.”