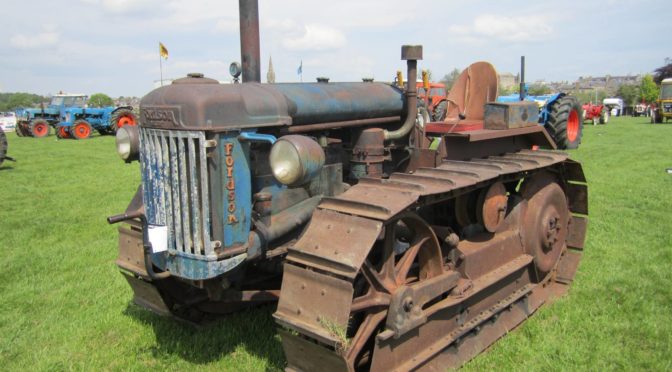 The selection of names in the alphabet that start with the letter F are very varied. Most are from eastern Scotland, the main tillage areas where agricultural implements and machines were used. There are clusters of makers in Perthshire and Fife, two important centres for their manufacture. Glasgow and the environs were also a central area for their distribution for the west of Scotland.

In Fife the name of Flear & Thomson, Station Road, Dunfermline, Fife, may be known to some readers as a car dealer. However, it started its life as an agricultural implement and machine makers. It was in business by 1890 manufacturing turnip thinners and ploughs. By 1905 it was also making threshing machines. It became a well-known agent. It became a motor engineer and a garage around the mid 1920s.

From its earliest days its name was closely associated with Massey Ferguson. Indeed, the company was set up to market the Ferguson TE20 tractor with its revolutionary three-point linkage. In 1958 its strapline was “The Massey Harris and Ferguson people”. You will see the Farm Mechanisation badge on many Fergies and MF tractors round the rally fields!
By 1953 the company was associated with Reekie Engineering Co. Ltd, Arbroath, and Stirling Tractors, St Ninians, Stirling. In 1965 an advert in The Scottish Farmer recorded it as a member of the G. Reekie group of companies.

In Perthshire, William Fraser was a smith whose business ran from at least 1904 to 1940. He exhibited at the Highland Show of 1904 when it was held in Perth. James S. Fraser & Sons, agricultural implement makers, Blairgowrie, Perthshire had a business that extended from at least 1883 to 1940. He undertook a wide range of trades though throughout this period he continued to be an agricultural implement maker, engineer, heating apparatus maker and fitter, mechanical engineer and smith.

A well-known Perthshire name is F. M. Fleming & Son, agricultural engineers, Rattray Engineering Works, Blairgowrie, which was well-known from the 1920s until the 1950s, for its haymaking implements and machines. This implement maker and engineer won a silver medal for its hydraulic model rick lifter in 1953. In 1955 it invented and made the Anderson sugar beet and root cleaner’. It was also an agent. In 1955 it was an agent for David Brown tractors.

Update –
If you are interested in the Scottish agricultural implement and machine makers in the period you may be interested in the newly published e-book Scottish agricultural implement and machine makers, 1843-1914: a directory, which has just been published by the Scottish Record Society. It is on special offer until 31 December 2020. Information on how to order this ebook is on the flier at the end of the images on this post.