Straw ropes had a number of uses on the farms.  One of them was for thatching stacks at harvest time. 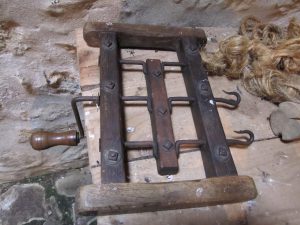 Here is what James MacDonald wrote about stack ropes and the making of straw ropes in Stephen’s Book of the Farm in 1908:

“Stack ropes – For tying down thatch or holding form the top of stacks, straw ropes, once universally used, are now being supplanted by coir-ropes or yarn.  This latter material is cheap, durable, and convenient to use.  If well cared for, it should last three or more years; and many farmers contend that, especially on large farms, or where straw and labour are both scarce and dear, the coir-rope is cheaper than the straw-rope. 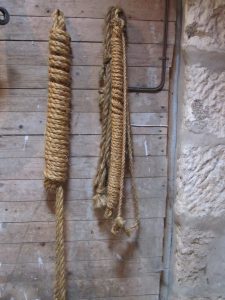 Straw rope making – Nevertheless, straw-ropes are still largely employed, and where they can be made without any appreciable addition to the labour bill, they will likely continue to be used. … Straw-ropes are made by means of the implement named the throw-cock.  Various forms of this instrument are in use. … An improved form of spinner consists of a simple contrivance by which one person is enabled to spin two or three ropes at one time. T he contrivance hangs from the shoulders of the spinner, who, by turning one handle, gives motion to two or three spindles, to each of which a rope is attached, the spinner moving backwards as the ropes increase in length.

Straw for ropes – The best sort of straw for making into ropes is that of the common or Angus oat, which, being soft and pliable, makes a firm, smooth, small, tough rope.

The ordinary length of a straw rope for a large stack is about 30 feet. Counting every interruption, a straw-rope of this length may take five minutes in the making-that is, 120 ropes in ten hours.”

The photographs of the throw-cock and ropes were taken at Aberdeenshire Farming Museum, August 2014.