The name Robert G. Garvie & Sons, Aberdeen, is usually associated with threshing machines. However, Garvie also made a range of other implements. The included seed drills. The Glasgow herald 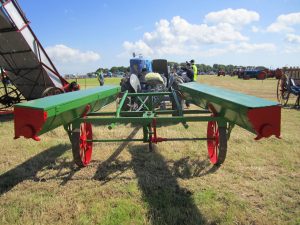 announced in 1894 that at the Royal Northern Agricultural Society’s Show that “Mr Robert G. Garvie, Aberdeen shows a new implement, a broadcast folding sower for all kinds of grass seeds. It is 18 feet wide, has only one set of gearing, and swings round and fixes automatically. The gearing is in the centre thus avoiding the clogging that occurs when it is placed near the road wheels. A great advantage in sowing on hilly ground is that the road-axle is one piece of steel, and is fitted with collars binding the frame 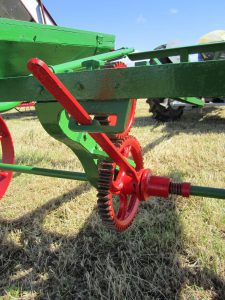 together. The seed boxes swing round and go into gear at once, being rigidly fixed without the necessity of using cutters and pins, and when the seed-boxes are folded up the machine is perfectly balanced without the boxes having to be drawn back.” By 1895 the Aberdeen Press and Journal could state that Garvie’s new broadcast seed sower claimed to have “radical improvements” made to it.

Garvie continued to develop his seed sower. By 1902 he was prominently advertising and displaying his sower. In 1902 at the Royal Northern Agricultural Show. The Aberdeen press and Journal commented that a “leading” feature on Garvie’s stand was “the 18 feet wide broadcast seed sower which contains all the ordinary parts, with some additions which Mr Garvie has introduced, and 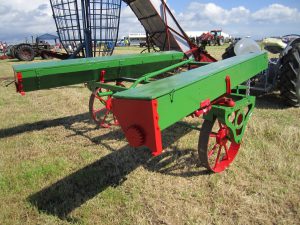 which add to the efficiency of the machine, while making it lighter, with less friction of parts.”

By 1908 Garvie’s seed sower was well-known. As the Dundee courier noted on 27 March: “The broadcast seed sowers and manure distributors sold by Mr R. G. Garvie, Bon-Accord Lane, Aberdeen, have been well-known for years, and as each machine is tested, agriculturists should have no hesitation in patronising this firm, as the workmanship is all that could be wished.”

There are still a number of Garvie seed drills around. They represented innovative and excellent workmanship by a leading implement and machine maker in Aberdeen.

The photographs of the Garvie seed drills were taken at the Fife Vintage Agricultural Machinery rally, June 2014.