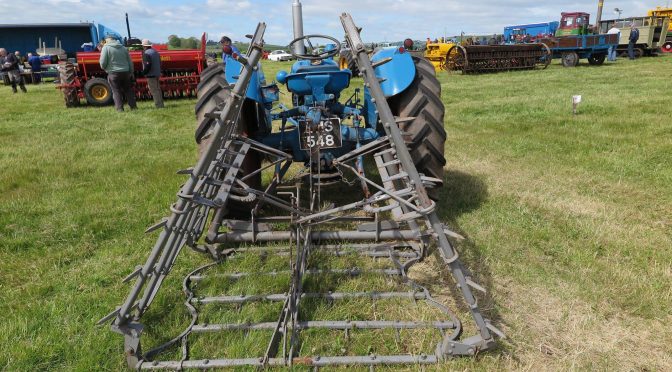 What were the implements used to sow the grain crop in 1811?

Patrick Graham, writing for the Board of Agriculture and Internal Improvement, provides a detailed account of the implements and practices to use them in Stirlingshire in 1811. It is worth a read:

“Harrows. In the harrows used in Stirlingshire, there is nothing very peculiar. They are sometimes of three beams or bulls, as they are here called, and sometimes of four. These are joined together with cross bars: in every beam there are five and sometimes six teeth, here are called tines. The teeth are of iron, and have a bevil forward at an angle of about 70 degrees, in order the more effectually to tear up the stiff ground and to root out the weeds. two harrows, drawn by two horses, are joined together in such a manner as that the course of the teeth may coincide as little as possible, and so as to pass over the ground in the most equable way.
A heavy harrow, called a break, is sometimes, and ought to be more generally used, for tearing out couch grass, and other obstinate weeds, in summer fallow, or for preparing the ground for barley. It is generally of two pieces and of a triangular form, the teeth very long and stout. The hinder part is furnished with two handles to raise or depress the teeth, as may be necessary. Great attention is required in the person who directs the handles to observe when the teeth os the break are filled with roots; and the horses must be stopped till they are removed. The same operation must be repeated at every turning of the harrow at the end of the rises. The roots are afterwards collected and burned; but, it may be observed, that a more advantageous practice would be to throw them into a heap in some corner of the ground; there the most noxious weeds will ferment, and, in the course of about two years, be converted into valuable manure. The process might be accelerated by the addition of a little lime in a caustic state. This process has actually fallen under the reporter’s notice in Dunbartonshire.

Rollers. The roller is an indispensable instrument in husbandry; and the heavier the roller, the more effectual it is. In no district is the use of the roller more necessary than in the Carses, or clay lands, of Stirlingshire; where, in dry springs, notwithstanding all the efforts of the plough and harrow, in pulverising the soil, the hard consolidated masses of clay, which deform the soil, can be reduced only by the roller. Before the introduction of the roller, it was common n the spring for all the men and women on the farm to be employed for several days in breaking the clods on clay soils, with wooden mallets, or mells, as they are called.
But perhaps the most important use of the roller, is the consolidation of the loose soil, which had either been naturally light, or which had been rendered friable and porous by the frosts, which, in this climate, often succeed the seed time. In such soils the seed, which has begun to send forth in fibres in quest of nourishment, finds nothing but open pores destitute of sap and warmth. By the operation of the roller, these pores are filled up; the roots of the vegetables are fixed in the soil; and the moisture necessary to vegetation is prevented from evaporating.

There is another application of the roller which merits attention. The seed time of 1808 was uncommonly early. Oats were sown in a considerable quantity in this district in February, and the whole oat seed was over early in march. Drought, accompanied by very severe frosts, succeeded for several weeks. In light dry field soils, especially in the western parts of Stirlingshire, the ground swelled and became open and porous. Whether from something peculiar to the season, or from the porousness of the soil, the oat-fields became infested with myriads of slid worms, which devoured the tender roots of the grain; rendered the whole acres unproductive; and threatened the ruin of the crop. It was remarked that this devastation was most fatal in grounds that were in the best condition, as in old lets which had been let out in grass. A field of about seven acres, occupied by the reporter in the immediate vicinity of the western district of Stirlingshire, was threatened with the total ion of the crop; so that, at one time, thoughts were entertained of ploughing it down, and sowing it a second time. By the use of the roller, this disagreeable operation was rendered unnecessary. The field was rolled twice; first, to obviate the effects of the frost in heaving up the soil; and then, after the young corn had got up, to destroy the slug worm. This second rolling was given after sunset, and before sunrise; as it was understood that it is during the night that these insects come forth from their lurking places and commit their depredations. In this operation, it is to be presumed that many of them were crushed to death; and what is perhaps of more importance, the earth was consolidated, and the pores, by which they had issued forth, were compressed and shut up. It is sufficient to say, that the operation was completely effectual, and that the ensuing crop was abundant.
Rollers of every kind are used in Stirlingshire. Some are of wood, but not the most approved; many are of stone; hollow rollers of cast iron are frequent. Rollers divided into two parts, and fluted rollers are not uncommon.

Drills. Drilling machines are generally used in sowing turnips and beans; and, by their means, the operation is no doubt performed with greater regularity and expedition, and the ground afterwards cleared of weeds with greater facility. Drill husbandry, however, has not been yet introduced into this county upon ne extensive scale. As far as the reporter haas found, it is only practised with regard to potatoes, turnips, and beans; and with respect to beans, he meets with a considerable difference of practice and opinion amongst the most intelligent agriculturists. In the Carses of Gargunnock, the drilling of beans is not found to answe, and is disused. Such, it appears, is the tenacity of the soil, that in horse-hoeing, large masses of compacted clay are torn up,and the crop materially injured. In the Carses to the east of Stirlingshire, and in the rich loans of Kilsyth, beans are generally drilled. The difference between the practice in the Carses of Gargunnock, and in the eastern parts of the county, arises probably from this, that the latter having been longer under the operations of agriculture, the soil has been rendered more friable than that of the former, which has been more lately brought under a proper mode of cultivation.”

The cultivating and sowing machinery were taken at the Fife Vintage Agricultural Machinery Rally, June, 2015.