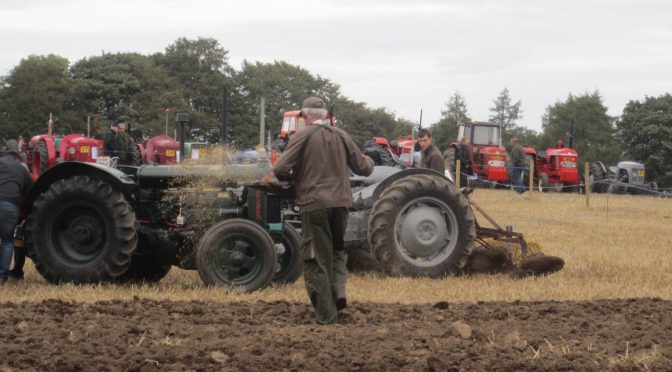 If you look at the sophistication of today’s grain drills it is hard to believe that seed sowing by hand was still carried out within living memory.

“One-hand sowing-In former times the sower by hand in Scotland was habited in a peculiar manner.  He sowed by one hand only, and had a sowing-sheet wound round him. …  The most convenient sheet is of linen.  It is made to have an opening large enough to admit the head and right arm of the sower through it, and a portion of the sheet to rest upon his left shoulder.  On distending the mouth of the doubled part with both hands, and receiving the seed into it, the loose part of the sheet is wound tight over the left hand, by which it is firmly held, while the load of corn is supported by the part of the sheet which crosses the breast and passes under the right arm behind the back to the left shoulder.  A basket of wicker-work, was very common in England for sowing with one hand.  It was suspended by a girth fastened to two loops on the rim of the basket, and passing round the back of the neck; the left hand holding the basket steady by the wooden stud on the other side of the rim. 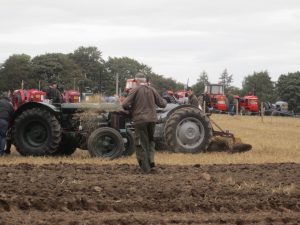 Two-hand sowing-But the system of sowing with both hands is now more general than one-hand sowing.  It should indeed be the universal method wherever hand-sowing is pursued.  It is the most expeditious; and many people consider that the sowing can be sone more evenly with two hands than with one.

For two-hand sowing a simple form of sowing-sheet is a linen semi-spheroidal bag, attached to a hoop of wood or of iron rod, formed to fit the sower’s body, buckled round it, and suspended in front in the hammer just described. Both hands are thus at liberty to cast the seed, one handful after the other.”

Stephens describes the “art of sowing”:
“The following detailed description of the art of sowing by one hand is also so far applicable to sowing by both hands.  Taking as much seed as he can grasp in his right hand, the sower stretches his arm out and a little back with the clenched fingers looking forward, and the left foot making an advance of a moderate step.  When the arm has attained its most backward position, the seed is begun to be cast, with a quick and forcible thrust of the hand forward.  At the first instant of the forward motion the fore-finger and thumb are a little relaxed, by which some of the seeds drop upon the furrow-brow and in the open furrow; and while still further relaxing the fingers gradually, the back of the hand is turned upwards until the arm becomes stretched before the sower, by which time the fingers are all thrown open, with the back of the spread hand uppermost. The motion of the arm being always in full swing, the arm being always in full swing, the grain, as it leaves the hand, received such an impetus as to be projected forward in the form of a figure corresponding to the sweep made by the hand.  The forward motion of the hand is accompanied by a corresponding forward advance of the right foot, which is planted on the ground the moment the hand casts forward the bulk of the seed.”

You can read more about sowing by hand in Henry Stephens, The Book of the Farm, 1889 in https://archive.org/stream/cu31924000275812#page/n239/mode/2up
The photograph of using a sowing sheet was taken at the Strathnairn Vintage Rally, September 2014.