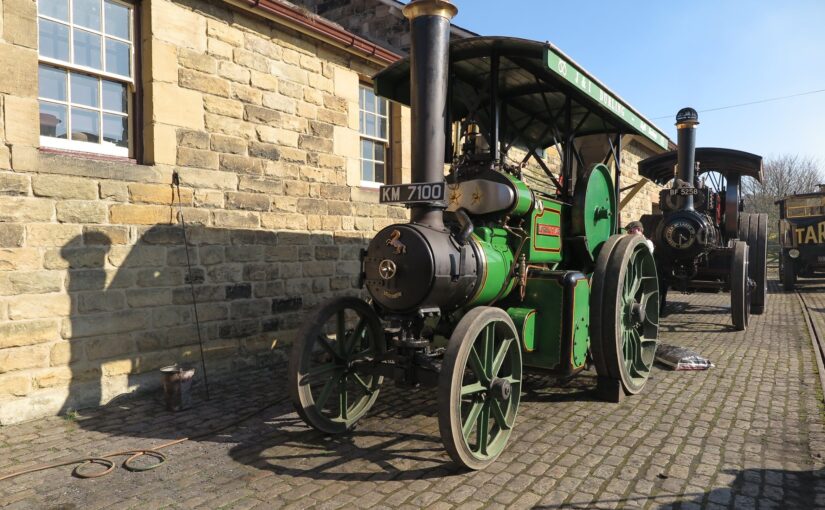 In recent weeks we have posted accounts of the Scottish exhibitors at the Smithfield Show. Detailed accounts of the implement department were included in the Scottish regional press and the farming press, including the North British Agriculturist. These accounts note the most important exhibitors and exhibits. These accounts can tell us a lot about the trends in the development of agricultural machines and machines, including new developments, fashions and the major makers.

The 1860s were a period of expansion in the agricultural implement trades. A number of new makers were emerging. One of the main trends was the development and increased use of steam power and the application of steam power to agriculture.

All of these trends can be seen in an account of the Smithfield show in December 1868 published in the North British Agriculturist. The account includes only English makers – which says a lot about the absence of Scottish makers at the show and the interests of the reporter:

“The machinery and implements of the Smithfield Club Show of 1868
Within the last few years agriculturists have bestowed increasing attention on improved implements and machines. This has stimulated mechanical invention, and a number of new articles have been brought before the public. Farmers are now prepared to expend larger sums than they have hitherto done in the purchase of improved machines and implements. In the interest alike of the manufacturer and the farmer, it is important that implements, especially of the more novel and costly description, should be carefully tested in regard to their adaptation for the work required of them. Besides their efficiency, durability is also an important question. This is now better understood by manufacturers. The substitution of iron for wood, and more recently of steel for iron in the working parts of many machines, us an evidence of this. Attention is further being bestowed on the relative strength of the several parts of the implement. Unnecessary complications are being got rid of: Direct action of the motive power is being secured. Implement makers as well as agriculturists understand better than heretofore the defects and difficulties which various machines have to overcome. Impossibilities are accordingly less frequently attempted. A fair chance and suitable conditions are secured for the successful working of the implements of the farm. Farmers and their labourers further exercise more skill and practical knowledge in the use of their more valuable machinery than was available even a few years ago, and this fact greatly enhances not only the utility but the durability of such machinery. In this direction further progress is necessary, especially in keeping all machines, whether for cutting, crushing, bruising, or other purposes, thoroughly clean, perfectly bright, and their working parts properly lubricated.

No new implements or machines are exhibited on the present occasion, but there are many improvements on those in general use. We miss from the gallery the ingenious gas-engine which last year created so much attention, but we learn that it is coming into use in London and elsewhere. Those who expected to see an application of heated air as a motive power were disappointed. At Islington we also missed the interesting apparatus in which the diamond is made to perform the rude duty of dressing mill-stones.

The heavy implements are crowded underneath the galleries, where space and light are alike scant, and a careful methodical examination of the various articles scarcely possible. Messrs Roby & Co., Lincoln, have a good display of engines of various powers and descriptions, an improved straw elevator, and thrashing machines. Richard Garrett and Sons, Sandringham, have a numerous and varied assortment of corn and seed drills, hoes, field rollers, corn-dressing machines, portable engines, with combined finishing and dressing thrashing apparatus. Messrs Hornsby & Sons, Grantham, besides portable thrashing machines and engines, exhibit many varieties of reaping, mowing, and combined reaping and mowing machines, with ploughs, root-pulpers, &c. John Fowler & Co., send from Leeds engines of different capabilities, from ten to fourteen horse power, their six horse furrow balance plough, and their giant cultivator, capable of overtaking eighty acres a-day. In preparation for winter, it is still, with some people, a desideratum that the steam ploughs should be adapted so as to cut a narrower furrow, which will stand up at a more acute angle than lie down flat, as too much of the steam ploughing is apt to do, To effect this change, some arrangement might surely be made to fit, if required, one or two additional plough shares into the balance frame. The six-furrow plough exhibited appears better adapted for light and comparatively level soils than for heavy clay or high ridged lands. Messrs Fowler also manufacture and exhibit Pirie’s double-furrow adjusting plough, which has created much attention in the north, which has received a highland Society’s prize, and which is described by practical farmers who have used it as strong, well-made, and capable, in a free-working soil, of turning over with a pair of horses two acres of land in ten hours. For ordinary soils three horses abreast are, however, required. Charles Burrell, of Thetford, has a strong and powerful traction engine, and a patent clover-dressing machine. Messrs Clayton, Shuttleworth & Co., exhibit their celebrated portable engines and thrashing machines. Of the former 8700 have been sent out, and of the latter upwards of 7800.

Messrs James & Frederick Howard have a large stand, on which are arranged steam cultivating apparatus, engines, horse-ploughs of various sorts and sizes, harrows, and haymakers, with mowing and reaping machines. The Beverley iron and Waggon Company have an extensive display of the numerous articles which they send out, namely, clod-crushers, field rollers. Mowing and reaping machines, one horse carts, manure distributing carts, bone mills &c. The articles appear to be carefully constructed of well-selected sound materials. Messrs E. R. & F. Turner, Ipswich, enter good portable engines, corn and grinding mills, with various admirable machines for preparing food for stock. Aveling & Porter send from Rochester their traction engines of the same useful stamp which rendered much essential service in moving heavy goods on the trial yards at Leicester. Messrs Ransomes & Sims, Ipswich, besides portable engines, have a varied assortment of ploughs, with turnip and chaff cutters. Messrs Marshall & Sons, Gainsborough, are reputed to send out first-class portable engines and thrashing machines, of which they enter several well got up specimens. Messrs Croskill and Sons, Beverley, although an old firm, continue to make advance with the most youthful and enterprising, and enter carts and waggons, clod crushers, and a 3 horse Bell’s reaper.

In the galleries, the lighter and more portable articles are placed. The arrangements are better than on any previous occasion, but the extra space obtained by the enlargement of the galleries is entirely filled up; and when crowds of people throng the more popular stands, the necessity for more room is very apparent. As at all such agricultural gatherings, the seedsmen claim a large share of space, and make an elegant and imposing display of seeds, roots, and specimens of grasses.
No implements are more required in this country than efficient mowing and reaping machines, and from the number of stands on which these are exhibition, it may be inferred that the demand for such machines is rapidly increasing. Burgess & Key, London, have an extensive collection. One of these is the prize reaper of the Paris International Exhibition. Walter A. Wood, London, displays mowing and reaping machines, at moderate prizes. John G. Rollins, London Bridge, shows Johnson’s American combined mower and self-raking reaper, manufactured at Syracuse, US. The rake us rotary, and runs on irregular raised cams; the implement is well thought of by those who have used it in America; but it is not at present made sufficiently strong to cope successfully with strong British corn crops. On Rollin’s stand are also shown numerous horse-rakes, forks, and other ingenious machines of American manufacture. Messrs Samuelson & Co., Banbury, exhibit their several sizes of mowers and reapers, many of which have found their way into the very north of Scotland, and commend themselves for their simplicity, lightness, and durability. At Messrs Hornsby’s and various other stands specimens of mowers and reapers of different construction and price are to be found, most of them already familiar to those of our readers interested in this department of farm implements.

Robert Roby, of Bury St Edmonds, sends his celebrated screens and separators, and his haymakers and horse-rakes Picksley, Sims, and Co., hailing from Leigh, Lancashire, forward a large collection of food-preparing machines. From Maldon the Messrs Bentall also send chaff-cutters, root-pulpers, and corn bruisers. Churns are exhibited by many excellent makers. Galvanised netting, iron hurdles, stable fittings, feeding troughs, and other such appliances are set forth in endless variety by a host of manufacturers.

Manufacturers and exhibitors appear to have been tolerably well satisfied with the orders and business which they obtained during their week in London. From county agents, especially, numerous orders are being taken, showing that salesmen and agents are becoming more and more the medium the manufacturer and the farmer.”

An interesting account which sets out some key trends in agricultural implements and machines, especially steam powered ones.

The photographs were taken at the Great Northern Steam Fair, Beamish, 2017.