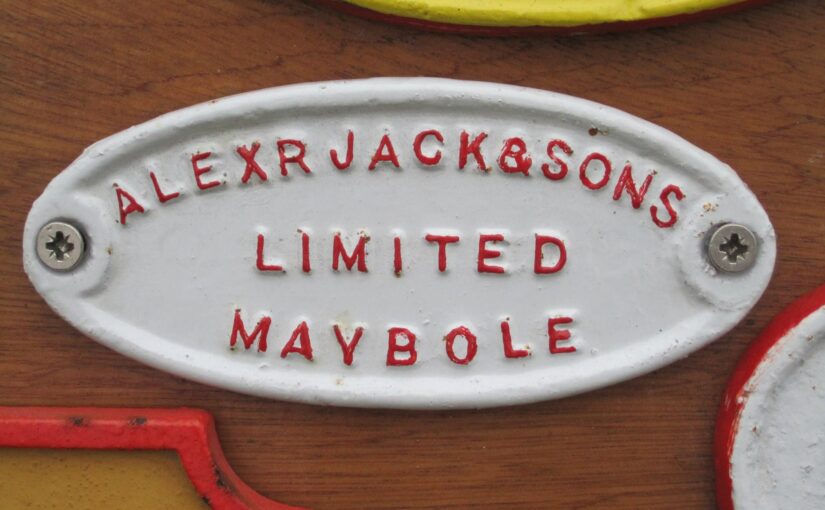 December was an important time for some of the Scottish implement and machine makers. It was time for the Smithfield Show. This was one of the key shows in the agricultural calendar. New implements and machines were launched there and key makers exhibited their wares, bringing them to a wider audience.

While English implement and machine makers predominated in the implement department, there were a few Scottish makers. They included some of the key makers.

The 1880s was a period of depression in Scottish and British agriculture. There were fewer acreages under cultivation, and less demand for agricultural implements and machines. It was also a difficult trading period for the implement makers. Despite these difficulties, a number of Scottish makers continued to exhibit at Smithfield. The North British Agriculturist provides an instructive account of the Smithfield Show and the Scottish agricultural implement and machine makers at it. It is worth quoting at length:

“Notwithstanding the present depressed condition of agriculture, the implement, seed, manure, and stock food exhibitors still continue to appear in full and representative force at Smithfield. Every available inch of space in the ground floor surrounding the stock, and the whole of the capacious galleries, are fully occupied by those who cater for the needs of farmers and agriculturists. As regards the machinery, we have several improvements and additions-labour savings and otherwise-to report on the manufactures of many of the best known machines; but these are chiefly alterations of minute parts, as of recent years mechanical appliances for farm work have been brought to a very high state of perfection, and the room for improvement grows yearly smaller and smaller.

Scotch exhibitors
Messrs J. D. Allan & Sons, of Culthill Implement Works, Dunkeld, we find in their usual position in the gallery, exhibiting their potato digger, a machine which combines all the good points an implement for digging potatoes should have. For durability, compactness, perfect action, and lightness of draught, it still retains the foremost position which has been allotted to it at most of the trials of this class of machine which have been held in this country. Its merits are too well known to need further comment. Messrs Allan inform us that this season their trade in diggers has somewhat improved.

Mr Thomas Hunter, Maybole, exhibited his patent double drill, scarifier, an implement that is coming very rapidly into repute for cleaning turnip drills, &c; and also his Dickson’s patent double drill turnip cleaner, one of Mr Hunter’s specialities which has had an unusually large sale. He is also showing his patent topping and tailing machine, an implement which has been much in request this season owing to the good crop of turnips. This machine saves both time and labour in lifting the turnip crop.
Messrs Alex Jack & Sons, of Maybole, exhibited samples of their well-known mowers and reapers, including a newly-improved “Caledonian buckeye” combined reaper and mower, and which has a very light appearance, combined with simplicity of arrangement. The whole gearing is completely covered. The cog-wheels (of which there are four) are arranged in the body of the machine, any they have also the additional protection of being carried upon extra high wheels, affording ample clearance from the ground. By a new improvement upon the ratchets of driving wheels, the stroke of the connecting rod acts upon the knife almost instantaneously, giving the machine an important advantage in starting easily in the face of a thick grass crop. Steel and malleable iron are chiefly used in the construction of this machine. Messrs Jack & Son also exhibited sample of their improved potato digger, which, like their reapers and mowers, has the gearing perfectly enclosed. Messrs Jack report having had an extra large demand for reapers and mowers and potato diggers during the past season.

Messrs G. W. Murray & Co., Banff, held their usual central stand, and appeared to command good attraction. Nothing specially now has been brought out by this firm this year further than little improvements in details of their potato planting machine, turnip and mangel sower, and “Victory” knife sharpener. The speciality on this stand, brought out at the Highland Society’s Show in Aberdeen in 1885, was desigmated the stubble scarifier and old lea renovator. This implement only requires to be known to command attention, particularly for old grass and gentlemen’s policies. It is fitted up with strong coulters, and cuts open the old grass in ruts about 3 inches apart, when a little manure and fresh grass seeds can be sown and harrowed over with a special set of harrows designed to follow the machine, and the result is a find flush of grass. This cannot fail to command attention where it is inadvisable to take a regular course of cropping.

Messrs Ben Reid & Co., Aberdeen occupied a prominent stand in the gallery, and showed, amongst their several specialities, specimens of their corn broadcast sowing machine, which, we believe, is holding its own position in the market for this kind of implement. We understand that, notwithstanding the depressed state of agricultural matters, there is still a considerable demand for these machines from all parts of the world. We also noticed their patent artificial manure distributor, which has gained many honours at trials in Scotland, notably at the Highland Society’s competition at Stirling in 1881, at the Border Union Society’s trials at Kelso in 1883, at Highland Centenary trials at Edinburgh in 1884, and last, but not least, at the recent Lochvale trails of the Highland Society last October, which were fully reported in our columns. Messrs Reid also show a new type of corn drill, whereby the machine is made much lighter than formerly, thereby reducing the draught, and still maintaining the old characteristics of uniformity in depositing the seed, for which the manufacturers enjoy so good a reputation. We may also mention their “Simplex” pump, as adapted for urine tanks and water carts, which is one of the handiest appliances for lifting liquids of any description.

Mr Thomas Scott, South Woodend, Bonnybridge, exhibited the “Economist” plough, with reversible point and wing. The point is firmly fixed by a hook and bolt, so that there is no fear in getting loose and coming off. The wheel is protected from straws, &c, by very ingenious sand caps on either side, so there is little risk of its getting clogged. We observe that the wheel has also been covered with wood; this is to prevent clods catching the spokes and impending the progress of the plough, which, thus fitted, will go through a food deep of soil without injury to the implement.

Messrs John Wallace & Sons, Graham Square, Glasgow, showed at their stand, No. 93, fine types of the “Oliver” plow. One pattern is a new patent steel one for all kinds of stubble work or cross ploughing. Another and very useful kind is the long handle chilled plow, which has all the advantages, and works in a similar manner to the short “Oliver” one, bit has long instead of short handles, and therefore can be turned or raised over a stone or any obstruction like a common swing plough. In several districts these implements are being used for lea and all kinds of ploughing. The beams are from instead of wood, and fitted with common Scotch muzzle for altering “land” and depth. All the wearing parts and genuine “Oliver” chilled, a sufficient guarantee that they will wear and scour well. Another kind is their 40X double wheel plow, the speciality of which is that it has double front wheels to suit those districts where double wheels are preferred to single ones. The greatest novelty, however, of the “Oliver” plow shown this year is the “Combination” plow, so called because of its having both the point and share reversible. When the point has worn blunt, all the ploughman has got to do is to tip the plough over on the mould-board side, and by grasping a small lever in the rear of the mould-board, he, with the other hand, simply reverses the point, and then releasing the lever, it is again securely fixed. Not only is the point reversible, but also the wing, so that as long as the parts will wear, the ploughman can always have a sharp edge on the underside, and all this without the assistance of a blacksmith.”