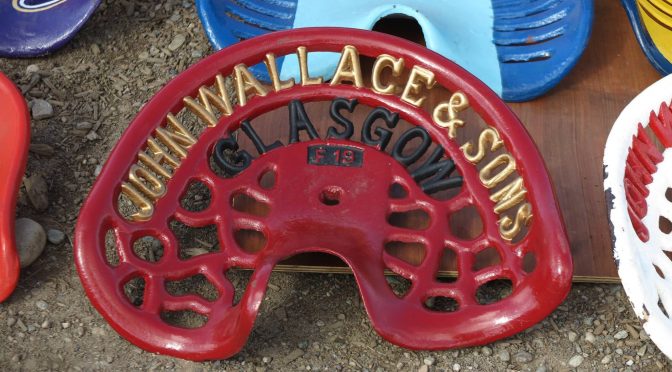 Obituaries are a source of evidence that can reveal some information about agricultural implement makers and their work. Some also note links between family members and their companies.

The Wallace family was one of the most noted families of implement makers, with a small number of businesses based in the west of Scotland. There relationship between some of the family members is recorded in the obituary of William Wallace of Ayr, who died in August 1937. An obituary in the Scotsman notes:

“Mr William Wallace, a well-known agricultural implement maker and inventor, died at his residence, 34 Ashgrove Street, Ayr, yesterday morning. he had been in failing health for some time. He was a son of the late Mr Robert Wallace, implement maker, Whitletts, who put the first two-wheeled reaper on the market in the late ‘sixtes last century. Two sons of the old man were the well-known heads for many years of J. & R. Wallace, The Foundry, Castle-Douglas. It was while he was with his father at Whitletts that the deceased invented the Wallace double-drill plough and manure sower which came to be used all over Britain. he also invented a broadcast manure sower which, like his other invention, proved a great book to farmers. About the year 1902 he became associated with John Wallace & Sons (Ltd), Glasgow, and for a period of about 21 years held the position of manager at Ayr. He was also managing director for a time of John Wallace & Sons, Ayr, and a little over five years ago he started business on his own behalf in Ayr with his son. He is survived by Mrs Wallace, and by a sone and two daughters.”

The company of Robert Wallace, Whittlets, Ayrshire was recorded in the agricultural press in April 1865. By 1900 it was recorded at the Railway Bridge in Whittlets. It undertook the trades of agricultural implement maker, engineer and implement maker and smith. From the early 1880s its specialities were reaping and mowing machines. A decade later it was making manure distributer which it entered into the Highland Society’s trial of manure distributers. Its area of trade was largely the south of Scotland, a fact revealed by its attendance at the Highland Shows in the south of the country, especially in Glasgow, Dumfries, Kelso, Edinburgh and Stirling.

Another of the companies in the obituary is J. & R. Wallace, Castle Douglas, Kirkcudbright. The company is recorded in the Scottish agricultural press in 1876. It was located at the Castle Douglas Iron Foundry in the town. It was also noted for its reaping and mowing machines in the early 1880s. Into the 1890s its noted productions included turnip cutters, boxed teeth harrows and ploughs. Manure distributors were an important production.

The company looked further afield for its business, and exhibited at the Highland Show in each of its eight show districts. Its last Highland Show was in 1952. The company was in receivership in 1988.

A third company is John Wallace & Sons Ltd, one of the major Scottish implement an machine makers who was well known throughout Scotland, Britain – and indeed the world – was The company was already trading in Glasgow in 18655, from Graham Square. Graham Square was to form the address of the company until the late 1960s. By 1894 it had premises at 7, 9, 10 and from 28 to 38 Graham Square. By 1905 there were also branches at Ayr, Cupar, and Stirling; in 1913 they were recorded as Ayr, Perth, Cupar and Lanark.
The company was a forward looking on: it became a company limited by guarantee in December 1896; it changed its form a number of times during its history. It started to exhibit at the Highland Show in 1867, and attended shows in each of the different show districts, demonstrating its wish to be a company known throughout Scotland. The Highland and Agricultural Society awarded it numerous awards for its manufactures including a medium silver medal for collection (1870, 1875). It also won a number of awards at the Society’s prestigious implement trials, including third prize of £5 for potato digger in 1881, and equal award (with 3 others) for potato digger or lifter in 1911. It also entered a number of the Society’s trials including its trial of mowers in 1882, trial of binders in 1893, turnip lifters in 1895, swathe turners in 1905, potato diggers or lifters in 1909, potato diggers or lifters in 1911, and potato planters in 1914. The company regularly advertised in the Scottish agricultural press from 1864 onwards.

The company also took over the business and patterns of other leading implement makers in the west of Scotland. The included Archibald Forest, award winning plough maker, Uddingston, Lanarkshire; Archibald became the foreman in the plough department of the Wallace works in 1905.
The company had a wide range of trades: from the 1870s they included agricultural implement maker, constructional engineer, contractor, engineer, galvaniser, also iron house and roof constructor, iron door maker, iron and wood building manufacturer, lawn mower maker, and machinery merchant. It made a wide range of manufactures including ploughs, harrows, turnip drills, potato diggers and lifters, reapers and mowers, hay making machinery, and iron buildings. It became a significant agent for a range of implements and machines from the best known and renowned makers in Britain. In 1911 they included Blackstone & Co. Ltd, Stamford, Frost & Wood, Ontario, E. H. Bengal & Co., Heybridge. In 1913 that list also included W. N. Nicholson & Sons Ltd, Newark on Trent, and the Oliver Plow Company, South bend, Indiana.

See what an obituary can reveal!

The name plates were taken at a number of rallies throughout Scotland.