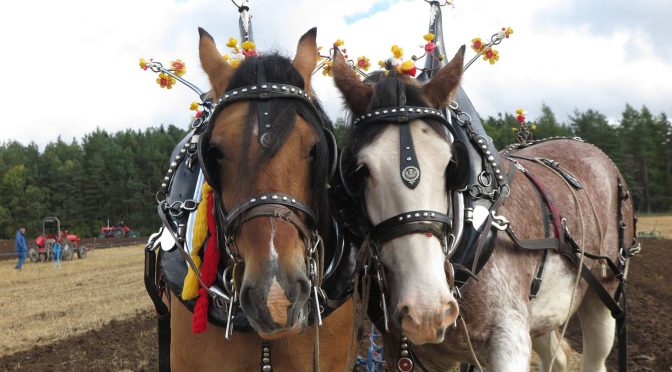 As we saw a few weeks ago, the Board of Agriculture and Internal Improvement undertook an important survey of agriculture and rural improvement in Britain from 1793 to 1817. This series was referred to as the County Agricultural Surveys, with each report having the title “General View of the Agriculture of the County of …”.

Writing the Ayrshire survey, William Aiton states the following about ploughs and plough making in Ayrshire. It provides an interesting account of developments and the spread of more modern and improved designs from neighbouring Lanarkshire and an eminent plough maker there: 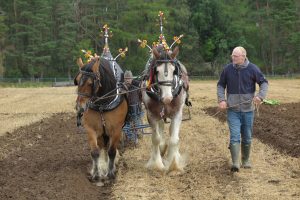 “The state in which the implements of labour are found in any district, may serve as another index for judging of the taste of the farmers, the progress of agriculture, and of refinement.
As agriculture was sooner attended to, and made greater progress in England; the implements of labour were brought to considerable perfection there, when they remained very clumsy, and but ill constructed in Scotland. But as soon as improvements were attempted in the soil, corresponding improvements were begin to be made in the construction and finishing of all sorts of implements of husbandry. From what I have seen of the implements in both countries, I am disposed to believe, that those in Scotland are now as properly constructed as those in England. I have seen a much greater profusion of utensils in the hands of English improvers, both in Scotland and England, than are generally used by Scotsmen. But if the are fewer in number in Scotland, they are generally constucted there more agreeably to mechanic principles, than they frequently are on the other side of the Tweed. The wheel ploughs I have seen used in England, and many other of their implements, are not formed according to the rules of mechanism, and are attended with a waste of power. It must be acknowledged, however, that though the Scots form their implements of husbandry on better plans, they d not finish them so handsomely, as is usually done in England. Perhaps the Scotch farmers are, as yet, too sparing in their implements of labour; but I am convinced that the generality of English farmers make by far too many farm utensils. There is no doubt great room for improvements in Scotland, both as to the structure and execution of implements, and I am happy to find that improvements are making in them every year.
Ploughs 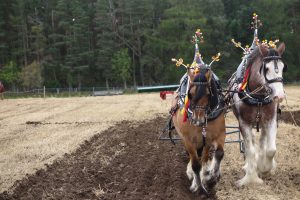 The Scotch plough, of the strongest and most clumsy construction, was in general use in the county of Ayr, till near the end od the 18th century. Swing and wheel ploughs, as then formed in England, were used by the Earls of Eglinton and Loudon, as early as 1750, and by several other noblemen and gentlemen in Ayrshire, soon after that period. But it was not till after 1790, that the Scotch plough was generally abandoned.
The head of the Scotch plough was of wood, from 2 to 3 feet long, and about 6 or 8 inches on each square. The sock was 8 inches diameter at the hinter end, and near 2 feet long. The beam from 6 to 9 feet long, and nearly 20 inches long at the middle. There wrest about 2 1/2 feet in length, and the stilts or handles about 5 or 6 feet long.
It required great power to move this monster of a plough, but when rightly constructed, it cut and set up a well shaped furrow, of large dimensions, and it was well calculated for labouring land which was stiff and bendy, or much encumbered with small stones. As it was but partially covered with iron, much power was wasted in friction. This plough was begun about 1775 to be formed more handsomely than in former times. The English swing ploughs, Rutherglen plough. and Small’s plough, began to be introduced, and others made after their construction; some of which were tolerably well, and others very indifferently executed.

But the best plough ever used in the county of Ayr, or probably in Britsin, is constructed by Mr John Wilkie, formerly in Vambuslang, now in Uddingston, near Hamilton. “This profound artist, has had the good fortune to discover everything requisite to the construction of a complete plough; and has formed an implement, the best adapted to the purpose, of any thing that has yet appeared in this county (Lanarkshire)-It turns up a furrow with a bold shoulder, like that for which the Scotch plough was valued. Its shape, like that of a well tapered wedge, turns over the soil, with the application of very moderate powers, and its broad winged share, leaves nothing unstirred.” -General view of Clydesdale, by John Naismith, Esq, p. 94.
As several hundred of Mr Wilkie’s ploughs have found their way to Ayrshire, and their superiority to all others being now admitted, by all who have used them; and as the plough-wrights in Ayrshire, have procured draughts of that plough, with casts of its mould board, and are now making it their model, I considered it my duty to apply Mr Wilkie for every possible information anent that excellent plough. I did not apply in vain; for Mr Wilkie was not only at the greatest possible pains to show and explain to me every thing regarding it; but he also drew up a particular description in writing, of his celebrated plough, which, with his permission, I insert in his own words.
“Uddingston, 15th January, 1810
Sir, In compliance with your request, I shall endeavour to give you a short account of the alterations and improvements which I have made upon the plough, within these last fifteen years. About the year 1794, the only plough in general use in this part of the country, and through the western parts of Scotland, so far as I know, was the 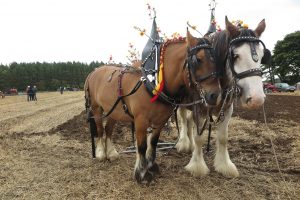 old Scotch plough, and that constructed by Mr Small, cart and plough-wright in Midlothian. These ploughs were either procured from Mr Small himself, or from other plough makers in the neighbourhood of Edinburgh, who had been instructed by him. They had acquired such celebrity, that many plough-wrights, in different parts of Scotland, endeavoured to copy them. But as some of the artists, who attempted to do so, did not fully understand the principles on which these ploughs were constructed, many of those who were made after the figure of Mr Small’s plough, and of course obtained his name, were far from being equal to those made by himself, or according to the original design.
About that time, Mr Thomas Findlay, farmer in Cambuslang, an intimate friend of mine, procured one of the ploughs made by Mr Small, or on his model, which he found made very bad work, especially on lea land. Mr Findlay, who is a very intelligent man, and had paid attention to the principles of mechanisation, immediately constructed a plough, somewhat improved, as he thought, in the wood work: and to which he affixed Mr Small’s mould board and iron work. The plough so constructed was found to be in many respects superior to those formed on Mr Small’s plan, as will be explained in course.
Being often in company with Mr Findlay, our conversation frequently turned upon improving the form of the plough; in consequence of which I gave up with another profession, to make plough making my sole business.
From 1794 to 1798. I formed the wood-work of all the ploughs which I made, on the improved plans suggested by Mr Findlay; but I still continued to use Mr Small’s mould board. During that period, however, my ploughs did nt reach farther than my immediate neighbourhood; which is generally a strong clay soil. Though my ploughs, at that time, made better work than those formerly used; yet they did not cut out such a deep and narrow furrow as the farmers wished, and did not make near work in lea land.
As the principal defect seemed to me to lie in the twist, or curve of the mould board, I put my invention to the rack, to get it remedied. After examining ploughs, of every construction, within my reach, I was of opinion, the twist ought to be more gentle than formerly, towards the point of the sock, or share, and that it should become gradually quicker or fuller, until the furrow has been set nearly on edge, after which the resistance of the furrow is diminished, by making the twist more gentle towards the hinder part of the mould board.
On these principles, I constructed a new mould board, altogether different from any I had ever seen, or that was then in use; and made many trials and alterations on its curve or twist, till I last fixed on that which I have since used. Of its merits it would be improper for me to speak. The approbation of almost all the farmer societies on the western counties of Scotland, and of the generality of the farmers who have used my ploughs; the numerous and increasing orders I have received, and the many thousands of ploughs in these parts, that have been made by other artists, on the model of my plough, or as near as they can follow it, are the best proofs of its superior utility.
I have in the course of the last eleven years, made and sold upwards of 2,500 ploughs, and the demand is increasing every year. Mr John Guthrie, in Mount, near Kilmarnock, ordered one of my ploughs about the year 1800; the first of my making that reached the shire of Ayr: and that gentleman has received many ploughs from me since that period, for himself and his numerous friends. In the year 1802. 17 ploughs were ordered by farmers in Ayrshire, and the number increased every year until 1806, they amounted to 84 for that year: and they have continued ever since, at or near that number annually; although several hundreds have since been made on the same model by plough-wrights in Ayrshire.” …
In so far as my knowledge of that plough extends, I am satisfied that it is the best every yet invented. I have not indeed had an opportunity os using it myself, for I have not had a plough of my own since it came into general use. But from having seen and examined it with all the attention I was capable of, having seen the beautiful work which it makes; in the ease with which it is drawn; heard the concurring testimony of plowmen and plough makers, every where in its behalf; and seen almost every plough-wright in the western counties, endeavouring to make their ploughs upon the same model, I conceive that Mr Wilkie’s plough is far superior to all others.”

The photographs were taken at the Daviot Vintage Rally, October 2017.