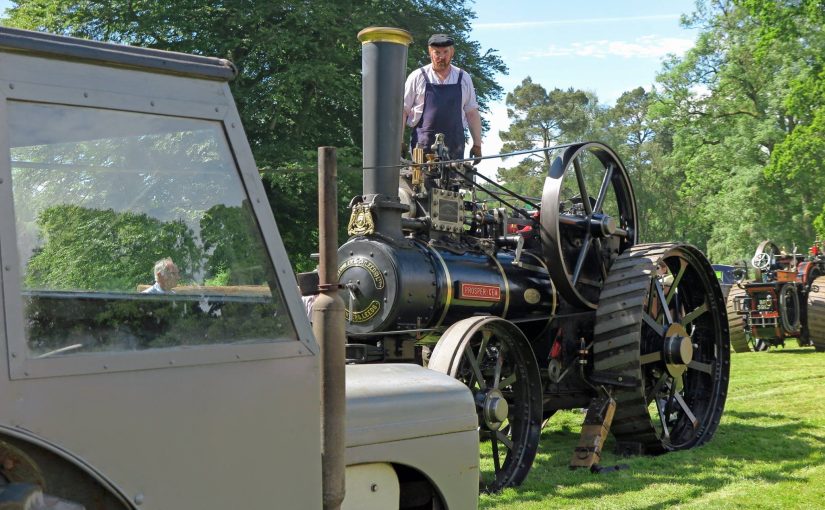 The move away from the use of the travelling threshing mill to mills erected at farms continued in the 1930s. Newspapers in some districts of Scotland, especially in the north-east, reported the erection of new mills on farms. These were important occasions on the farms, and were seen as ceremonies at which the farming family and neighbours were invited. While they provide accounts of these ceremonies, they sometimes also recorded information on the mills and how they were powered.

While some farmers preferred a mill from some of the big makers such as Garvie & Sons, Aberdeen, others favoured local mill makers, some of whom were well-known. They included J. & D. Craig, Waterside of Phesdo, who is recorded in a number of adverts. Some mills were being powered by tractor, though the use of oil engines was common.

Some accounts of new threshing mills have been included below:

St Andrews (St Andrews Citizen, 1 November 1930)
Mr Braid, St Nicholas Farm, has set up a new threshing mill at his farm, which is much more serviceable than the travelling mill. The new mill can be worked by four or five men at any convenient time, while the travelling mill necessitated the employment of sixteen or eighteen people. Messrs Garvie & Sons, Aberdeen, supplied the mill. It is driven by a tractor, and housed in a new shed next the granary, and the threshed grain is conveyed direct to the granary. The grain carrier, chaff blast, trusser &c, are of the latest types.

New thrashing mill at Brechin farm (Brechin advertiser, 9 December 1930)
At Findowrie, Brechin, Mr Barron has had installed a threshing mill of the latest semi-portable type, four feet wide, and fitted with ball bearings and sheaf carriers and straw carrier, also a chaff blast. Messrs J. & D. Craig, Waterside of Phesdo, Laurencekirk, are the manufacturers.
Threshing was carried on for a few hours, and everything worked well.

Angus. New threshing plant (Dundee courier, 5 January 1933)
Mr Robertson has had a new threshing mill installed at Fonach, Forfar. It is of the double dressing type, 3ft 6 in wide, and fitted with ball bearing. Messrs J. & D. Craig, Waterside of Phesdo, Laurencekirk, are the manufacturers.
The power is a reconstructed Shanks’ oil engine. When the mill was set in motion Mrs Robertson fed the first sheaf, and thrashing was carried on for a few hours, turning out an ideal sample of grain.

Knock installation (Aberdeen press and journal, 8 November 1935)
Messrs Wright Bros., millwrights, Boyne Mills, Portsoy, have installed at the farm of Mains of Raemore, Knock, Rothiemay, occupied by Mr William Adam, farmer, a new threshing mill, with semi high speed drum, driven by a six-horse power Lister Diesel engine. This mill was on view and seen working at the Highland and Agricultural Show at Aberdeen in June.

New mill installed (Dundee courier, 14 November 1935)
An interesting event has taken place in the Auchterderran district at Powguild Farm. (Mr John Cunningham).
In presence of a large number of friends and neighbouring farmers a new threshing mill was installed.
A pleasing touch in the ceremony was the part played by Mr David Fair, of Ballinkirk, who was tenant of Powguild 50 years ago. Mr Fair put through the first load.
The new plant, which is driven by electric power, was built by Messrs R. G. Garvie & Sons, Aberdeen, and has a high-speed drum screen and straw and grain convergers.
After the installation Mr and Mrs Cunningham entertained the company.