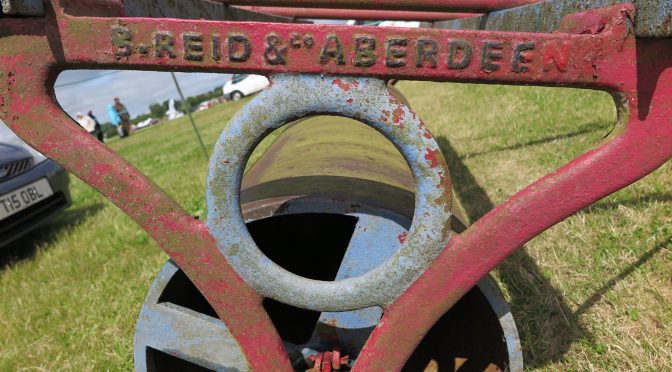 The Scottish agricultural press and the provincial press include a number of adverts from implement makers who were retiring or had stopped business for various reasons. As with farms, a number of implement makers held roups or public sales to dispose of their tools and stock in trade. Others transferred their businesses to other willing parties to continue.

These adverts can be a useful source of information on what happened to a business and as an aspect of business history. The following adverts all reveal aspects of the retrial of a number of implement makers from the mid 1850s onwards.

“Clearing sale of agricultural implement maker’s stock
Alexander Young, agricultural implement maker at Monifieth, near Dundee, respectfully intimates to his friendsand the public that, having now disposed of his business, he will sell, by public group, in an early day, the whole extensive stock of implements and utensils of trade belonging to him.
Particulars of the stock, and the day of sale, will be stated in a future advertisement.
Monifieth, 30th October, 1856″
From Dundee, Perth and Cupar advertiser, 14 November 1856

“William Crichton, blacksmith, Port Elphinstone, in retiring from business, begs leave to return his sincere thanks to his numerous customers for the liberal support they have bestowed on him for the last sixteen years, and that he has now given over his stock-in-trade to Mr Alex Newlands, blacksmith, who he trusts will meet with the same patronage as bestowed on him.
In reference to the above, Alexander Newlands begs to intimate that, in addition to the trade as formerly carried on by his predecessor, Mr William Crichton, he intends carrying in general country work-via, plough and other agricultural implement making, and horse-shoeing, and having been a number of years in the employment of Messrs Sellar & Son, Huntly, with whom he has had great expertise in the above, he trusts, with good workmanship and moderate charges to merit a share of public patronage.
Port Elphinstone. May 30, 1860.”
From Aberdeen journal, 6 June 1860.

“Important sale of property, founders’ and engineers’ plant and tools
Upset price reduced
The remains, subjects, belonging to Robert Mitchell & Son, Limited, will be exposed for sale, by public group, on Friday the 2nd day of November, at twelve o’clock noon, within the Royal Hotel, Peterhead.
The subjects consist of the yards and workshops, entering from Marischal Street and Tollbooth Wynd, in which the firm carried on the trades of iron founding, engineering, and agricultural implement making. Also, the plant and tools not previously disposed of, consisting of steam engine, cupola, foundry crane, moulding boxes, patterns, steam hammer, planing machine, vertical boring machine, lathes and other tools, per inventory.
The whole subjects above described will be offered in one lot. Of not so disposed of, the proprerty, yards, workshops, and sheds will be offered in one lot without the tools.
In case there are no offerer for the property in one lot, it will be again exposed in two lots as under-
Lot no. 2A, comprising the yards, foundry, blacksmith’s and engineering shops; and
Lot no 2B, comprising yard, sawmill, and agricultural implement shop.
Plan of the property, inventory of tools, together with title deeds and articles of sale, may be seen in the hands of Patrick Irvine, solicitor, Peterhead.
The Manager, John Fraser, will supply any information, and show the workshops and tools to intending purchasers.
Peterhead, 12th October 1883.
From Banffshire Journal, 30 October 1883

“Notice
To engineers, implement makers, iron founders, and iron merchants
In consequence of the death of Mr G. W. Murray, there will be sold, as going concerns, the premises, plant, stock-in-trade, and good-will of the business carried on by Messrs G. W. Murray, engineers, implement makers, and iron founders, Banff Foundry, and Messrs Murray & Blake, iron merchants, Banff. The premises are situated in a good position, and are well adapted for the business of the respective firms. The machinery and plant of G. W. Murray & Co. are specially constructed for the business, and are in good working order. The stock-in-trade of both firms is well-selected, and mostly in good order.
The agricultural implements manufactured by G. W. Murray & Co., are well-known, not only in this country, but in most parts of the world. Excellent connections have been formed, and a large business has been done for many years. Recently a considerable business has been done as to fishing gear, and the fishing industry is very largely prosecuted in the district. A large business is also done in other departments of this firm. Messrs Murray & Blake have for many years done a large business throughout the whole North of Scotland, and are well established.
The premises, plant, and stock may be inspected at any time.
Further information and conditions of sale may be obtained from Mr Geo. A. Duncan, manager of the works, or Messrs Allan & Soutar, solicitors, Banff, either of whom will receive offers or both businesses, together or separately, as candidates may prefer, up to 23rd September next.
Banff, 20th August 1887.”
Banffshire journal and general advertiser, 6 September 1887

“Old established agricultural implement manufacturing business for sale
owing to the death of Mr William Anderson, sole partner of the firm of Benjamin Reid & Company, agricultural implement makers, Bon Accord Works, Aberdeen, it has even resolved to offer the works and business of the firm for sale.
Particulars may be had from Messrs Davidson & Garden, advocates, 245 Union Street, Aberdeen. Agents for the executors, and offers will be received by them up to 30th April.
The highest or any offer may bot be accepted.”
From From Aberdeen press and journal, 7 April 1896.

“Agricultural implement makers’ business for sale
There will be exposed for sale by public roup, within The Institute, Keith, on Wednesday, the 18th August 1909, at twelve o’clock noon, the business carried on by Messrs Auchinachie & Simpson, agricultural implement makers, Keith, together with the whole stock in trade, machinery, plant and goodwill, also the premises in which the business has been carried on.
The business has been established for over 60 years, and is now being realised in consequence of the death of Mr John Simpson. It is the only kind in the district, and the present affords an excellent opportunity for anyone desirous of acquiring such a business.
For particulars apply to Mesrs Mayer & Fraser, Commercial Bank Buildings, Keith; or to the subscribers, in whose hands are the articles of group, and inventory of stock &c.
Kemp & Auchinachie, solicitors, Keith.”
From The Scotsman, 4 August 1909

Lots of interesting titbits of information!