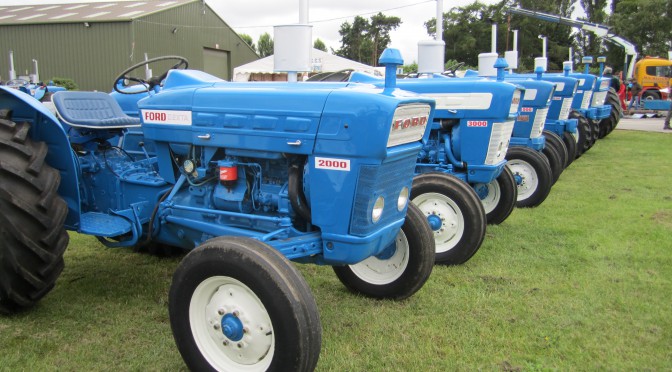 Last year marked 50 years of tractor production at Ford’s Basildon Plant.  Vintage tractor and machinery rallies in Scotland and throughout Britain held special displays of tractors to mark the occasion and to celebrate the launch of the revolutionary and successful thousand series associated with the new plant.

It takes a lot of confidence to move from an established production plant to a new one.  But major changes can bring opportunities, including ones to develop and grow a business.  Ford reaped these benefits.  A number of Scottish agricultural implement and machine makers also secured substantial benefits by moving their businesses from one part the country to another in the nineteenth century.  They included a small number of leading makers that continued to be well-known and renowned for their manufactures until well through the twentieth century. 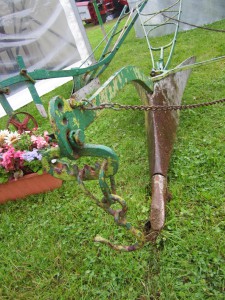 George Sellar started his business as a blacksmith in Cullen, Aberdeenshire, in 1822.  As he was ambitious, he found the small village too limited for his energies and capacities.  By 1847 he had moved to Huntly, an important agricultural town at the centre of a large agricultural district.  There, he opened a general blacksmith and horse-shoeing forge, in Granary Street, under the name of George Sellar & Son. 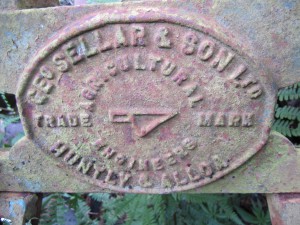 More prestigious awards were to come.  At the International Exhibition of 1862 in London, George Sellar & Son received the only prize medal given to a Scottish firm for ploughs.  From that time, the business established its reputation as the principle ploughmaker in Scotland.  The name Sellar became and was synonymous with ploughs.  But it was also a noted maker of grubbers (being the first to introduce steel into their manufacture), steel harrows, and turnip sowers.

By 1877 George Sellar & Son described its address as the “Implement Works, Huntly”.  The business continued to expand in the following decades and into the twentieth century, also adapting to the changing needs for agricultural implements and machines, as well as the development of a wide network of agencies for farmers. 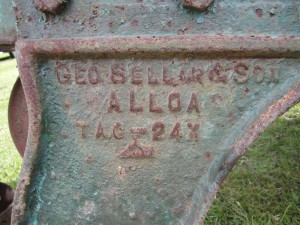 In 1884 it greatly expanded its activities to include a further premises in Princes Street, Huntly.  New modern machinery and production methods were introduced and a foundry added.  By 1905 it had premises in Huntly, Turriff and Aberdeen, while a further one was opened in Stonehaven, Kincardineshire, by 1909.  A foundry at Kellibank, the Kellibank Works, Alloa, was opened around the time of the First World War, giving it greater opportunities for production.  Thereafter, the business became primarily associated with the towns of Huntly and Alloa: George Sellar & Sons, Huntly and Alloa.

The company incorporated by 1919 as George Sellar & Son Ltd, giving it further business opportunities.  New branches were opened.  By 1930 it had addresses in Huntly, Alloa, Aberdeen, Perth and Stirling.  By 1961 the company’s address had changed to Great Northern Road, Aberdeen.  For a number of years it retained its association with Huntley.

While George Sellar moved his business within the county of Aberdeenshire, another Aberdeenshire ploughmaker, Alexander Newlands, moved his one to another part of Scotland.

Alexander Newlands was born in 1834.  He spent his early years working for George Sellar & Son, Huntly, “with whom he has had great experience” in general country work – “plough and other 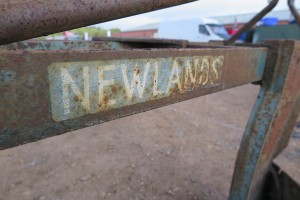 Agricultural Implement Making, and Horse-Shoeing”.  In June 1860 he took over the stock in trade of William Crichton, blacksmith, Port Elphinstone, Aberdeenshire.  He did not, however, stay in Port Elphinstone for long and by 1864 he had moved to Inverurie where he set up his shop at 43 High Street.

Alexander spent his early years at Inverurie developing his business.  The year 1868 was an important one for him: it was the first one that he exhibited his manufactures at the Highland Show, the national agricultural show, which was being held in Aberdeen.  It was an important forum for him to promote and increase his business to a much wider clientele in the north-east and to agriculturists throughout Scotland and further afield.  He exhibited his own two horse plough with steel mould and a ridging or drill plough.

While he recognized that there was a trade for his implements in the north-east, he believed that he could expand his business by seeking 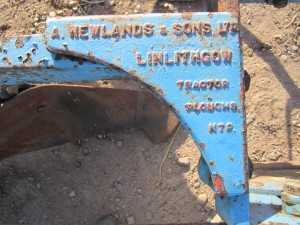 opportunities elsewhere.  On 11 September 1880 he sold, by public sale, his property at 43 High Street.  He took the ambitious step of moving to Linlithgow, the county town of West Lothian.  In 1884 his son, also named Alexander, joined him in business, which became known as Alexander Newlands & Son, Provost Road, Linlithgow.  The name of St Magdalene Engineering Works, which we associate with the business, is not recorded until around 1913.

From the 1880s, Alexander Newlands & Son specialised in the making of ploughs, grubbers and harrows.  It later ventured into
horse rakes, for which it acquired a good reputation.  In 1900 its manufactures included two horse swing ploughs; medium drill ploughs with markers; baulking drill ploughs; combined drill and potato ploughs; one horse drill grubbers; horse or drill hoes as drill grubbers; house or drill hoe as ridging up ploughs; field grubbers; diamond harrows; and drill scarifiers. 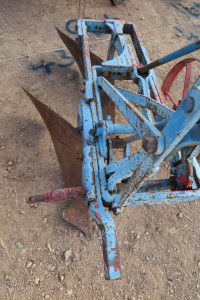 Alexander Newlands & Son was a progressive company.  From 1884 when the young Alexander joined his father, the business exhibited at the Highland Show nearly every year, bringing attention to their implements throughout Scotland.  It also advertised in the Scottish agricultural newspapers of the day, the North British Agriculturist, and from 1893 The Scottish Farmer.

Even after Alexander senior died in 1907 the business continued to be an innovative one.  By 1914, it acted as an agent for McCormick and Bamfords, two leading makers, and in 1919 sold the Austin farm tractor. 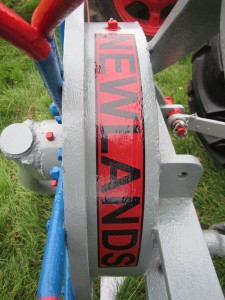 Alexander Newlands & Son became incorporated as Alexander Newlands & Sons Ltd in 1920.  This brought a new era for the business.  It took the important steps in 1922 of participating in the important exhibition of farm tractors and tractor implements arranged by the Highland and Agricultural Society of Scotland.  In that year it also won a silver medal for its self-lift brake harrow, entered as a new implement, at the Highland Show at Dumfries.  In 1934 it exhibited at that Show a cultivator and ridging attachment for tractors as a new implement.

It was ploughs that Newlands continued to be closely associated.  In the 1950s and 1960s they could not be beaten in the ploughing matches in the Lothians: the ploughmen with the Newlands ploughs carried away the prizes.  Even the ploughmen that swore by Ransomes turned to Newlands for their competition ploughs.

In the south-west of Scotland, Alexander Ballach, was working as an implement and machine maker.  But his move across the country was under different circumstances to those of George Sellar & Son and Alexander Newlands & Son.

Alexander Ballach was born in 1858.  He formed a partnership with George Bowman to form the company of Ballach and Bowman, millwrights and implement makers, Newton Stewart.  After that partnership was dissolved in 1897, Alexander continued the business under the name Alexander Ballach & Co. at the Crown Implement Works.  His premises comprised a turning and fitting shop, a millwright shop, an engine and showroom, a pattern room and foundry. 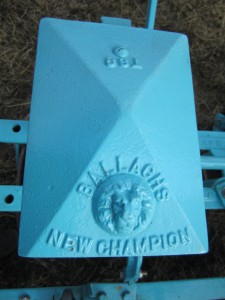 Two years later, on 20 March 1899, Alexander reorganized his business.  It was taken over to form the incorporated company A. Ballach & Company Limited, for which he was its first Chairman.  The company was set up as an agricultural and general engineer, implement maker and ironfounder, making horse gears, turnip drills, reapers and mowers and as a millwright, making thrashing and winnowing machines.  However, it was short-lived.  On 15 January 1902 the members of the company resolved to voluntarily wind it up. In these short years Alexander also had other woes.  On 18 September 1900 his estate was sequestrated; that process was not to conclude until early 1906.

Even if Alexander wanted to set up another agricultural implement and machine making business in south-west Scotland he could not.   When he set up A. Ballach & Co. Ltd, one of the conditions of the sale of his former company, Alexander Ballach & Co., to new one of A. Ballach & Co. Ltd, was that he would not start up another business as an agricultural engineer, implement maker, millwright, ironfounder, or enter into a partnership with another person to undertake these activities, within the counties of Ayr and Dumfries and Galloway.  If he wanted to continue in business his only option was to relocate to another part of Scotland.

In 1907 Alexander Ballach set up a new business at Arch 7 of Manderston Street, Leith under the name “Alex Ballach & Sons”.  By 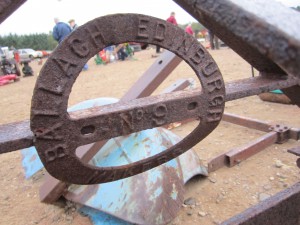 1909 the business had moved to Arch 12 and Arch 14 where it remained until 1925.  It quickly became established and gained a reputation for itself: each year from 1907 it promoted its manufactures at the Highland Show.  It also quickly established itself as an agent for leading implement and machine makers such as George Sellar & Son, Henry Bamford & Sons, Uttoxeter, and Walter A. Wood Mowing and Reaping Co. London.  It participated in the trials of potato diggers or lifters arranged by the Highland and Agricultural Society of Scotland in 1911; this was one of the key trials in the early twentieth century.  Alexander continued as the head of his business until at least 1925 when he was 67 years of age. 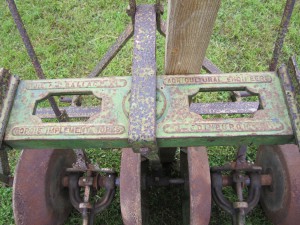 In 1924 Alexander’s two sons, John L. and James, started up their
own business.  It was known as J. L. & G. Ballach, agricultural implement makers, Gorgie, Edinburgh.  By the following year they described their premises at Aitkenhill, Gorgie Road, as “Gorgie Implement Works, Edinburgh”.  They were to take that name with them when they moved to new premises at Bankhead Avenue in the newly developed Sighthill Industrial Estate in 1962. 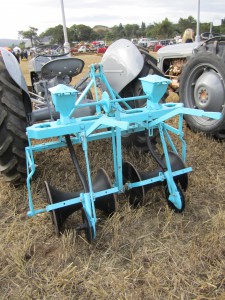 The two brothers worked together as agricultural implement manufacturers and millwrights until December 1946 when James retired from the business.  Thereafter, John Leslie carried it on.  It became incorporated as Ballach Ltd in 1963 and continued trading until at least the mid 1970s.

Like their father Alexander, John Leslie and James Ballach also promoted their manufactures at the Highland Show.  They were regular exhibitors from 1925 until 1965.  They also advertised in the Scottish agricultural newspapers.  From their early days they became renowned for their drill scarifiers, and more especially their turnip drills, including their combined turnip and manure sower.  A number of their turnip sowers are still seen around the Scottish tractor and machinery rallies today.  The business entered no less than nine new implements for the best “new implement” at the Highland Show between 1927 and 1965.  It also acted as agents for other implement and machine makers, including Massey Harris in 1926.

Moving a business to a different district or region of Scotland allowed three noted implement and machine makers to grow and develop their businesses.  They used their potential to become very successful businesses with good reputations for their manufactures and to be well-known throughout Scotland and further afield.

Had they not taken the bold steps to recognise their own potential and to explore new geographical locations to develop their businesses, how would they have developed?  How different would the Scottish implement and machine industry, and the implements and machines available to farmers, have looked without them?  I think quite different.