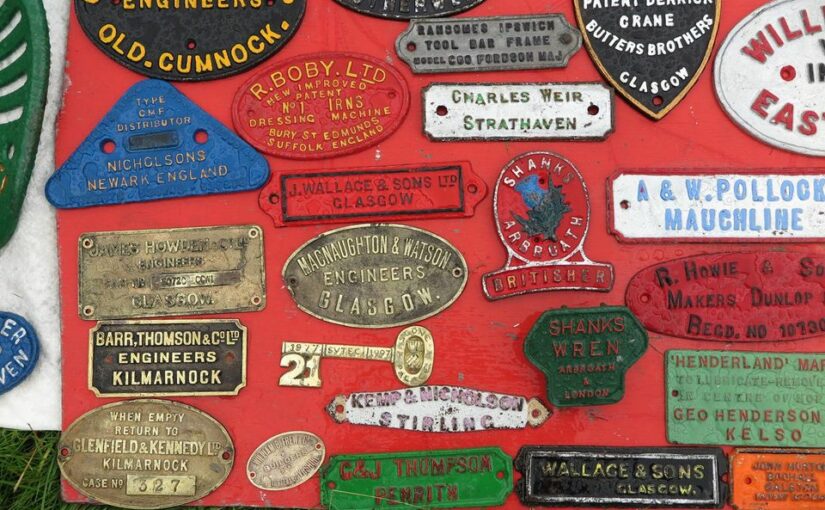 A number of premises belonging to the Scottish agricultural implement makers went on fire. Some of the fires were very destructive with the complete loss of premises, or significantly affected production of manufactures.

The accounts of the fires in the newspaper press sometimes include detailed accounts of the premises and the businesses which are not recorded elsewhere. These accounts are worth quoting at length for the insights they provide:

The Dundee courier provided an account of the fire at the premises of William McFarlane, millwright at Weltown, near Coupar Angus in February 1880:

“A fire occurred at Weltown of Balbrogie, near Coupar Angus, on Sunday morning, when the workshop of Mr William McFarlane, millwright and agricultural implement maker there, was entirely destroyed, along with a quantity of wood, tools, &c., belonging to Mr McFarlane and his workmen. The premises contained three engines in connection with the works, and an extensive business was carried on. Besides the fittings and tools in connection with the works, some four threshing mills and a number of other implements in for repairs and in course of construction, besides a great quantity of wood, were burned. The place was first observed to be on fire about 7.30am by Mr David Mitchell, farmer, Downham, who resides near by, and who promptly came and gave the alarm. The fire being observed by others of the neighbours, a number of willing hands were soon on the spot; but the building, being composed of wood, was soon burned to the ground. A wooden shed, containing implements of husbandry, narrowly escaped being burned. The fire is supposed to have been purely accidental, but how it originated is not certain. The loss is estimated at about £800, and is partially covered by insurance in the Sun Fire Insurance Office. “

A destructive fire affected the Cragshaw premises of Barclay, Ross, & Hutchison, agricultural implement makers, Aberdeen in May 1920. The Scotsman of 10 May, suggested that the cost of the fire amounted to between £6000 and £10,000. The Aberdeen press and journal provided a detailed account of the fire that provides detailed information about the company’s Cragshaw Works which were famous throughout the works – and not only in the north-east of Scotland:

“Big fire at Aberdeen Implement Works
Destruction put at £6,000.
The Aberdeen City Fire Brigade were out three times on Saturday. Their first call was in the early morning to a destructive blaze at Craigshaw, just beyond the city boundary at Torry, damage being done to the premises and stock there of Messrs Barclay, Ross, and Hutchison, one of the best known firms of agricultural implement makers in Scotland, to the extent of about £6,000.
The Craigshaw outbreak was observed between two and three o’clock in the morning, and it was only after about five hours’ hard work on the part of the members of the Fire Brigade that the flames were got under. The premises, which are situated close to the railway line, consist of a large range of buildings, including a corrugated iron structure 168 feet long, 30 feet broad, and 14 feet high. And a stone and lime erection 100 feet long and 46 feet broad. The corrugated iron building was practically gutted, while the other, particularly at the south end, was badly damaged. The buildings included a millwright’s shop, stores, offices, blacksmith’s shop, engineer’s shop, dressed wood store, etc.
It is not known how the outbreak originated, but it is thought to have started in the paint shop. The signalman on duty in the railway cabin beside the railway bridge at Craigshaw was the first to observe the outbreak. He immediately telephoned for the fire brigade, which was promptly on the scheme, under Firemaster Inkster. By the time the brigade arrived, however, the flames were bursting through the roof of the corrugated iron building, and by three o’clock the erection was practically ablaze from end to end.

The firemen devote d their energies to preventing the flames from spreading to the stone and lime structure. They were successful in saving the north end, but at the other end, which adjoins the corrugated iron building, the flames did considerable damage. It was not until seven o’clock in the morning that all danger was past. Two telegraph standards were badly damaged.
The works at Craigshaw were the largest of their kind in the north of Scotland. Threshing mills, manure distributors, oil engines, and a variety of other agricultural machinery and implements which were being prepared for the exhibition in the showyard of the Highland and Agricultural Society at Aberdeen in July were destroyed.
The damage is covered by insurance.”

Barclay, Ross, and Hutchison also had a further fire at their premises in May 1838. This affected their Abbotswell Road premises. The Aberdeen press and journal provided a short account of the fire:

“Spark from trade blamed for causing fire
Aberdeen Fire Brigade had to answer a call to the Abbotswell Road premises of Messrs Barclay, Ross and Hutchison, implement makers, shortly before 6 o’clock last night.
A signalman in a nearby railway cabin saw smoke coming from a wood store which adjoins the main south railway, and gave the alarm.
It is thought that a spark from a passing train had started the outbreak, which was soon under control.
The damage is slight, a number of timber beams being charred and a small portion of the wall destroyed. “

Seems that fires can affect a business on more than one occasion.