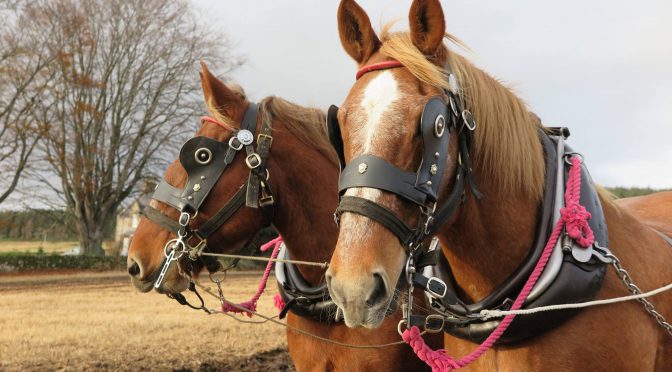 If you were a farmer or agriculturist looking to buy a new plough in 1899 you would have had a wide selection to draw from. Throughout Scotland, and especially in the eastern agricultural districts there were small makers associated with particular districts, with their ploughs being adapted for particular soil types and types of work. There were also larger makers some of which were located in the market towns, as well as the towns and cities. The prominent makers included A. Newlands & Son, Linlithgow, George Gray, Uddingston, George Sellar & Son, Huntly, Ben Reid & Co., Aberdeen.

In addition to ploughs being made by prominent makers in Scotland, a number of the leading agricultural implement and machine makers were agent for other makers. P. & R. Fleming & Co., Glasgow, was agent for Ransomes, Sims & Jefferies Ltd, Ipswich, as was W. H. Kirkwood, Lothian Bridge, Dalkeith. Milne & MacDonald, Lockerbie, was agents for the Cockshutt Plough Co., North America, as was also Alexander Jack & Sons, Maybole. John Wallace & Sons Ltd, Glasgow, was agent for a wide range of Oliver ploughs.

While ploughs were used for a wide range of purposes, including ordinary ploughing, deep ploughing, and the making of drills, farmers could purchase a range of ploughs for their ordinary work. A. Newlands & Son sold a two horse swing plough for £1 15s as well as a prize swing plough with steel mould board also for £5 15s. George Gray had a range of models of its prize swing plough. Wheel ploughs, more usually associated with English agriculture, were also available with P. & R. Fleming selling a Ransomes’ plough with double wheels for £4 10s or one with a single wheel for £4 5s. 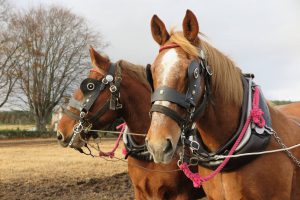 Chill ploughs had gained popularity and were being sold by a number of the implement and machine makers. Wm Storie & Son, Newton St Boswells, sold Ransomes chilled ploughs with wheels and skim coulters (for £4 5s each). Newlands made its own child steel plough with wheel for £4 2s 6d. Probably the most famous of all of the chilled ploughs were those made by Oliver and sold by John Wallace & Sons Ltd, Glasgow. Wallace sold a wide range of these ploughs including Oliver’s long handled chilled plow, Oliver’s lea chilled plow, Oliver’s combination chilled low, Oliver’s chilled plow, Oliver’s large chilled low, with jointer and Oliver’s one horse chilled plow. Other notable chilled ploughs were also imported from Canada: the “Dux” plough made by Cockshutt Plough Co. The most noted importer of the “Dux” ploughs was Alexander Jack & Sons, Maybole, which widely advertised its agency of them in the Scottish agricultural press. Among its range of “Dux” ploughs was “The Dux 96”, selling at £4 2s 6d, the “Dux 96” with double wheels, “The senior Dux”, and “The senior Dux” with skim coulter. Also available were Anglo-American ploughs such as the Anglo American chilled iron plough with two wheels, skim and tail presser sold by Thomas Hunter & Sons, Maybole or the Anglo American plough no 1 sold by George Sellar & Son, Huntly. 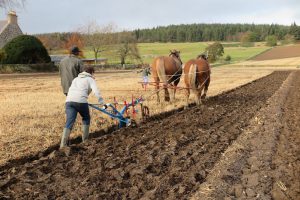 If you were looking to purchase a plough in 1899 you could could choose from ones from a range of makers (most of whom were widely known and renowned by that time) and with a range of designs and features, with important influences from North America.