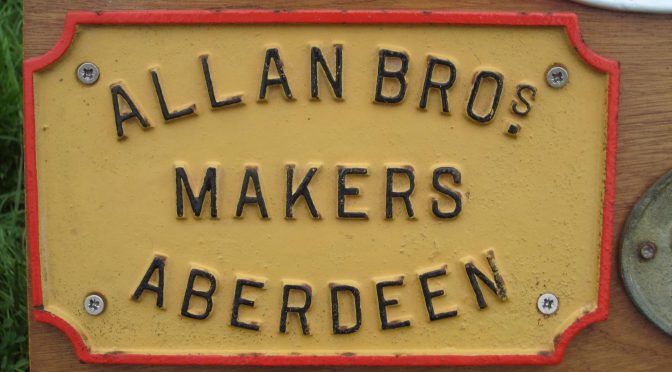 If you were a farmer in Aberdeenshire in 1898 you would have been well aware of the firm of Allan Brothers, engineers, 102 West North Street, Aberdeen. As well as being engineers, the company was also a gas engine manufacturer, mechanical engineer, oil engine manufacturer and a machinery oil merchant and refiner.

The company was an enterprising one, exhibiting at the Highland Show from 1901 until 1949 and advertising in the North British Agriculturist from 1901. 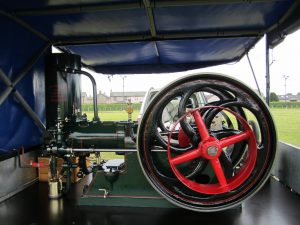 The company was renowned for its oil engines. It manufactured a range of them, under the name “Allan” oil engine. In 1906 they included oil engines from 2 1/2 to 17 brake horse power engines (2 1/2, 5, 6 1/2, 8 1/2, 11, 14 and 17). By 1909 it also manufactured a 23 break horse power engine. evelopmments continued and in 1926 the company entered one of its engines for the new implement award of the Royal Highland and Agricultural Society of Scotland. This was fitted with the latest improved “frozen cylinder saver” which consisted of an opening in the cylinder jacket covered in a flexible diaphragm secured by a ring. If the cylinder was allowed to freeze, the diaphram bulged out and bursted, thus releasing the pressure due to freezing, and prevented the cylinder jacket being destroyed. 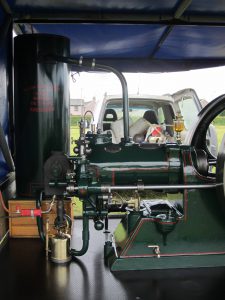 The company moved with the times in developing new engines fro different fuels. In 1926 its 23 brake horse power engine special designed for agricultural purposes was to work with any brand of paraffin. In 1933 it manufactured paraffin oil engines of the lampless type, as well as its crude oil engines

There are still some manufactures from Allan Brothers around the rally fields. However, there are not too many of them: look out for engines and thrashing machines.

The Allan oil engine was exhibited at the Dumfries Vintage Rally, 2014.