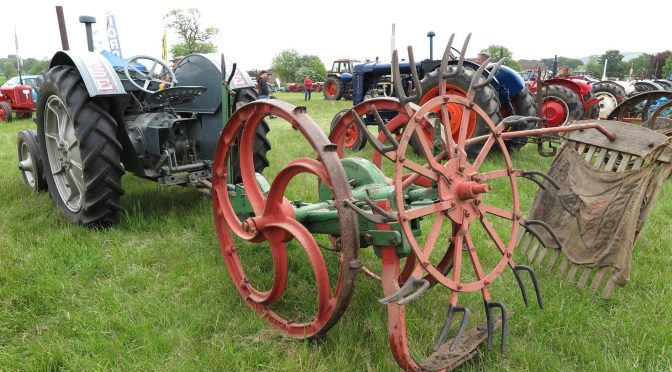 There are a few accounts of agricultural implement works in the provincial press in Scotland. These provide details of what the works looked like, the arrangement of the works, activities and sometimes additional information on an implement maker.

One of the best accounts of one of the Perthshire makers is that of J. D. Allan, Murthly, near Dunkeld, renowned for reaping machines and potato diggers. In July 1896 the special correspondent of the Dundee Courier visited the Culthill Works. Here is his account of that visit:

“Leaving the Victoria May Hotel, Stanley, which had been our comfortable and home-like headquarters for a time, we drove out the Blairgowrie road, and, crossing the Tay by the splendid new girder bridge at Caputh, erected a few years ago now, we got into that district of Perthshire known as the Stormont, and soon reached Culthill, where we were to see the workshop and farm of Mr John Allan, of the well-known firm of J. D. Allan & Son, Mr John Allan being the sole partner and representative. Mr Allan is a son of the late Mr Douglas Allan, whose name is as familiar as a household word amongst farmers and ploughmen for the making of high-class light-fraughted ploughs, in which respect the high prestige hitherto attained by the firm is still kept up.

On entering upon the outside premises we were struck with the evidence on every side of the extensive business carried on in timber, the place having the appearance of an American logging yard. The timber grown in the district is famed for its large size and excellent quality, the larch, elm, and ash trees being remarkably fine. Mr Allan purchases the timber mostly on the root from the neighbouring proprietors, and conveys it in the log to Culthill, where it is cut up into planking sized to suit the demand. It is afterwards stored into large, well-ventilated drying sheds until it is properly dried and seasoned, and is then disposed of to the orders of those in the trade, such as cart and wheel wrights, coach builders, town and country joiners, &c, a speciality being made in the turning out of cart and carriage hubs or naves, fellows, and spokes, and all kinds of framing. The ends of the sawn timber in the drying sheds and even the ends of the large unison logs in the outside yard are all thickly coated with a composition of cow dung to prevent splitting or gelling.

The workshops are extensive and comprise a regular blacksmiths’ workshop, for the shoeing of horses, repairing of farm implements, machines, &c, a joiners’ workshop, where all kind of country joiner work is executed, and a very commodious and well-lighted workshop, containing the most modern and ingenious machinery, tools, and other appliances for the making of new farm implements and machines. The machinery is driven by water power supplied by a stream which passes the works, the large overshot water wheel which drives the outside circular saw also supplying the power for the machinery within the works. The water power is for the most part ample, but in case of scarcity a 6-horse power steam engine has been fitted up within the works, which, however, is not required more than three or four days in a year. Mr Allan says that all makers of implements are alive to the fact that it is only by the aid of labour saving, power-driven machines, which will accomplish the maximum amount of work with the minimum expenditure of hand-labour, that such works as his can nowadays be made lucrative. In the large workshops are machines for tenoning the spokes of wheels, and for boring the fellows to suit; shearing and punching machines capable of cutting iron bars 1 inch thick, or punching homes through same; emery grinding machines, which are driven at a very high speed, and are very effective, and also common stone grinding machines; a heavy geared turning-lathe capable of turuing shafts 4 1/2 inches in diameter; circular and band saws; vertical and horizontal drills, the boring tools being an American patent, which ensure the holes made through even the thickest iron or steel plates to be perfectly circular. In the blacksmiths’ department are six forges, the wind for which is supplied by a fan blast making 3000 revolutions a minute. Each forge has its accompanying anvil and hand tools, and in connection with the blacksmith department is an oven for heating wheel tyres, its capacity being four of the heaviest sized tyres at a time. A cool tyre is put in as a hot one is taken out, and this keeps the hands going, and facilitates the work.

Connected with the fitting department are all kinds of modern appliances, such as vices and hand tools, machines for punching out key seats, mandrels, and templates, to ensure the procuring of duplicate parts for any machine when wanted. In front of the works is the large, well-lighted and well-ventilated paint shop full of farm implements, such as farm carts, reaping machines, potato diggers, turnip slicers, &c, in preparation for the Highland Show at Perth. Mr Allan has been remarkably successful with his output of potato diggers, for which he has gained very high repute both at home and abroad. They are specially well known and very highly appreciated in the three sister countries-England, Scotland, and Ireland-a great many going over the Border and across the Channel every year, so much so that difficulty is experienced in keeping up with the orders. At the last trial of potato diggers at the Stirling Highland Show the firm gained the first prize of £15 amongst a lot of 22 entrants, comprising all the leading makers of Great Britain. They also gained first prizes at Glasgow, Coupar Angus, Lincolnshire, and Aberdeen; and silver medals at the kelso Highland, Coupar Angus, Strathearn, Dublin, and Aberdeen, and a handsome massive silver cup. value £10 10s, at Long Sutton in Lincolnshire. The firm further do a good trade in reaping machines, for which they hold several silver medals. For the making of cart wheels and axles the firm is also highly famed, especially for extra strong wheels for wood carting. The fellows are made 4 inches broad, and ringed with steel tyres to suit. These wheels, because of their being made of the very best seasoned wood, and because of the steel tyres being much tougher and harder than iron, are very strong and durable.

Another speciality is the making of turnip-slicing carts. The box is made to hold a load of 15 carts of roots, which, with the horse going at plough speed, it slices and distributes in from ten to twelve minutes. The cart is made with a grated bottom so that earth and grit may fall through. It is used principally for feeding cast ewes on grass land, and for lambs in the spring before the grass comes. Mr Allan’s make of banker carts for transporting large trees is unique. They are fitted with shafts which gives the horse full control over them, and makes them much safer to work than common bankers. They have a high rainbow axle, and two other strong iron bows, the one forward and the other shaft, with a powerful screw on each bow. Chains are attached to the screws, which are put round the trees, and by actuating the screws one man can load a tree weighing 1 1/2 tons with the greatest ease, and with no danger. One of these banker carts will be exhibited at Perth Show.

In addition to the works, Mr Allan farms Cairnsmuir, a farm of 96 acres. The soil is rather poor, but being liberally treated, good crops are produced. Cross cows are kept and mated with an Angus bull, and 7 or 8 calves, mostly blue greys, are produced. They are hand-fed on sweet milk and lined cake, no other condiments being used, and if there is reason for pride in the workshop, there is noels reason for pride in the production of excellent calves. They are kept on till two years of age, and being liberally dealt with all the time, come out splendid specimens. In the spring of 1895 the strikes, when about two years old, were purchased by Mr Morgan of Ardgaith, Glencarse, at nearly £20 each. They were well kept until Hay & Company’s Christmas sale at Perth, where two of them gained first prize for bullocks under three years of age, and were sold for £60 10s the pair. This year the stirks were sold to Mr Gellathly, Drumbachlie, another famous breeder, and doubtless they will be heard of at future shows. Mr Allan purchases annually a lot of grit blackface ewes in the spring. He sells the lambs when weaned, and keeps the ewes to feed. He finds that he can buy grit ewes in the spring for not much money than he can buy black ewes in the fall, and that they pay him much better than any other kind of stock. Mr Allan speaks in the most laudatory terms of the kindness and liberality of his proprietor, Sir Alexander M. McKenzie, Bart, of Delvine, who at great cost erected the extensive workshops, and gave him every possible facility for the carrying on of his large business. Before leaving, we had the pleasure in shaking hands and having a conversation with Mr Allan’s mother, widow of the late Mr Douglas Allan. The old lady was born in February, 1812, and is 84 years of age. She is hale and hearty, and has all her intellectual faculties unimpaired. She lives in a cottage on the preises, and is never happier than when bustling about doing her own household work.”

A contemporary account of Mr J. Douglas Allan in the North British Agriculturists provides some further information on the company and its activities:

“Amongst the whole Scottish implement trade there is no better liked man than Mr J Douglas Allan, of Culthill Works, Dunkeld. To fully appreciate the geniality of his character he must be visited at his works, which are driven by water-power, and are situated on Gourdie Braes, a picturesque slope on the Tay valley, about five miles from the fashionable summer resort of Dunked. Besides being an important maker, Mr Allan has also the advantage of being a practical farmer, occupying a fair-sized holding on the estate of Sir Alexander Muir Mackenzie, the genial baronet of Delvine. The potato digger is the implement by which Mr Allan’s name is best known. He was the first in the country to make those on Hanson’s principle wholly of iron, and shortly after their introduction by him they were generally made all over the country. Mr Allan, however, has succeeded in retaining his reputation for making one of the strongest, lightest draught, and easiest working machines in the market, and with it he succeeded in taking the first prize of £15 offered by the Highland Society at their Stirling meeting in 1881, twenty one diggers competing. At the Royal Society of England’s Newcastle trials in 1887, Mr Allan’s machine was not quite so fortunate, but in the opinion of many who witnessed the trials, it did the best work, and was entitled to a better place than that allotted to it. On the excellence of Mr Allan’s machine we need not dwell, but only quote the common saying throughout the trade. “For a tattie digger Allan is get ill tae beat”. Besides the digger Mr Allan also manufactures carts, reapers, mowers, and other implements, and he also does a very large and regular business in hickory spokes. Mr Allan never misses a Highland Show, where his kindly manner makes him one of the most universally respected men in the yard, whilst his constant attendance in the Perth market has made him one of the best “kent” figures in his county.”

The photographs are of a range of potato diggers at the Fife Vintage Agricultural Machinery Rally, June 2016.