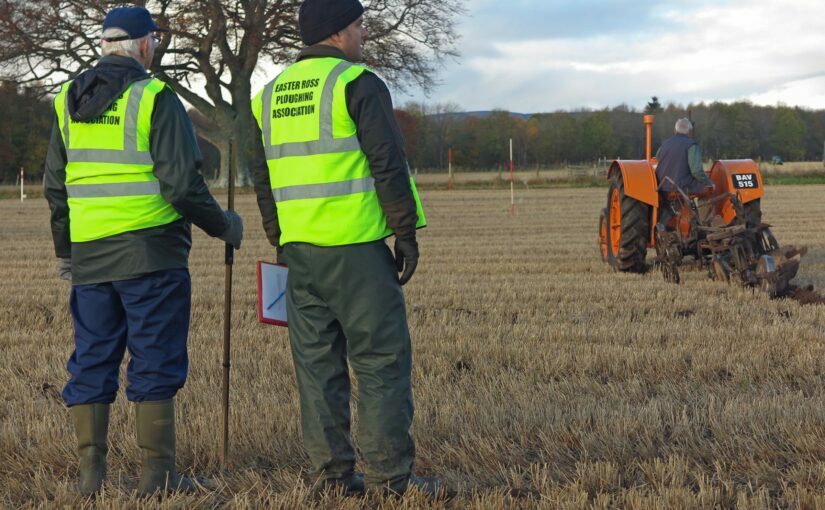 Since the late eighteenth century there have been many comments made on the value of ploughing matches. An interesting account on their value was published in the Stirling Observer on 17 February 1887. It was published at a time when American ploughs were starting to be introduced and new classes set up for them. The account is worth quoting at length:

“Competition has long been the acknowledged medium by which the relative merits of almost everything has come to be determined; and it is generally recognized as a safe, sure, easy and practicable way of doing it. We find that competition leads and stimulates the greater part of mankind to put forth energies and to arrive at a degree of perfection in whatever they are aiming at, which otherwise would not be attained. It has had its effect on ploughing as on most other things. We are indebted in a great measure to ploughing matches for the uniform good ploughing to be seen in some districts; and also for the almost unexceptionally good working of the ploughs now-a-days. These matches may sometimes have caused a little expense to farmers; but that expense has probably not been ill-incurred of it has been the means of giving the ploughmen an interest in doing their work well; for if good ploughing is better for the crop than bad ploughing, which it is, the farmer has not been altogether without his regard.

Ploughing marches are held for the purpose of encouraging and rewarding by premiums those who excel in the art of turning up the soil in the way best adapted for producing a good crop, and for most effectually keeping down grass and weeds. The ploughing which practical judges approve of is that which is straight, evenly held, well packed, the grass well put in, the seams between the furrows close and clean, the seed bed as deep as possible at the given width of furrow, the furrows so set that when measured the face or socket of furrow will measure about half an inch more than the back or cutter-cut, the finish neat and narrow, and the ridge so ploughed that every furrow meets the eye in proper order. The shape of furrow most approved is about 60 degrees. If cut much more acute the pane will be too thin, the back weak, and the furrows will want that body, and substance necessary to give the ploughing the required solidity. If cut much more rect-angular or square, we lose that depth of seed bed and twine of furrow so much prized in first class plouhing; and the nearer we approach the square, brick-shaped furrow, the plough gradually loses command, the grass is near the top, the furrows sit on edge, and are generally badly closed. The latter is the worst of the two extremes.

The construction of the plough, as well as the skill brought to bear upon setting the irons, has a great deal to do with the quality of the ploughing; and a plough in good trim is always easier drawn and easier held. Ploughing machines have served a good purpose in the past, and they continue to do so. There is no better means by which to perfect new implements, and stir up young ploughmen to emulation. The Highland Society gives annually something like 160 medals to district societies for ploughing competitions, and many of these meetings have been held since the first broke up within the last fortnight. As farm work in most cases is very much in arrear, owing to the prolonged frost, some of the ploughing matches have not been so well attended as usual.

At some of the gatherings-Wishaw, for example-we notice that “delving” matches have this year been introduced. In other cases-as at Kirknewton, Ratho, and Currie ploughing matches-American ploughs have been under trial. Speaking of the last-mentioned match, a report has been sent us, says:- “There were this year three competitions, the committee, in addition to the high-cut and plain competitions, have introduced a competition for American ploughs. There were in all thirty one entries, of which five were for the high-cut and three for American ploughs. The conditions of the match were that each competitor should plough a half-acre in eight hours; the high-cut competitors ploughing an imperial half acre and the plain-cut competitors a Scotch half acre. The match commenced at eight in the morning, and with the exception of the high cut ploughman, who took all their time, finished within half an hour of the specified time. The work was on the whole considered highly satisfactory, particularly in the case of the plain work, besides which the work done with the American plough was considered to be at a disadvantage”. Time is a very material element in such competitions, and if the time allowed-usually at the rate of 10 hours to the imperial acre-were shortened, ploughing matches would be more useful than they are.”

Do you agree with the article?

The photographs were taken at the Easter Ross ploughing match, November 2017.