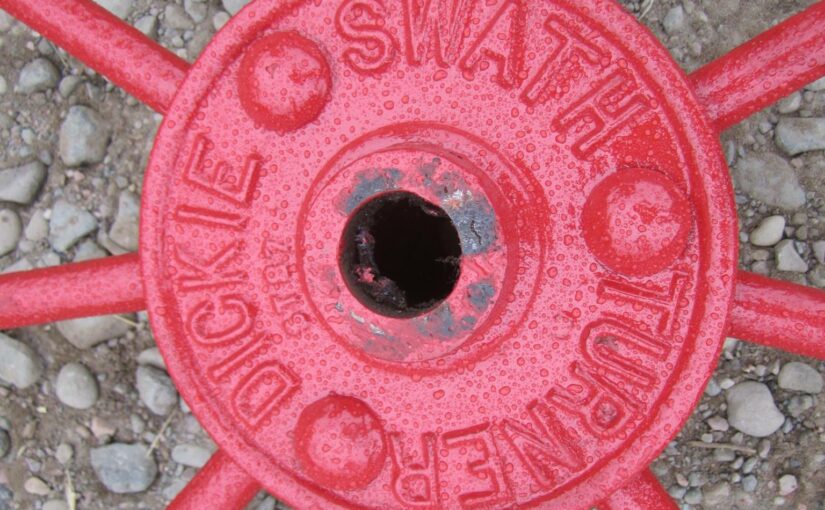 The 1860s and 1870s were two important decades for the mechanisation of Scottish and British farming. New implements and machines were being rapidly developed and used on farms. There were revolutions in the way crops, especially the most labour intensive ones, such as grain and potatoes were being sown, grown, harvested and stored. Important innovations included the development of the reaper, the steam plough, the potato spinner.

“In no department of British industry has there been such marked progress of late years as in that of agricultural implement-making, and in none has there been brought to bear more energy, perseverance, skill, and ingenuity on the part of those engaged. Manufacturers of agricultural machines have had a hard up-hill battle to fight. They have had to war against prejudices strengthened by the precedents of thousands of years-prejudices consecrated like heirlooms, which it would be shame and dishonour in the sons not to transmit to posterity intact, as they had received them at the hands of their fathers. Surely it was too much in these mechanics to ask that the sickle, which had come down to the present generation almost unchanged from the days in which it was used to lay low the golden crops of Boaz, should be cast aside for the clipping or sawing apparatus of a Presbyterian clergyman, or that the picturesque and time-hallowed wooden plough, drawn by its slow oxen, or lazy sleek-sided horses, should be superseded by the savage grubber, fierce digger, or many furrowed plough, impelled by the quick impatient steam engine? In the good old days the cattle browsed the natural grasses of the thousand hills over which they roamed; why should they now be confined in courts, or chained up in stalls, to feed upon artificial meats? Even after green crop husbandry, which was certainly an unwarrantable departure from our fathers’ customs, came into practice, the beasts munched their whole turnips, and chewed their uncut straw with gusto-should we not, therefore, be wanting in respect to the memory of those who have gone before to employ pulpers and chaff-cutters to tear the turnip to pieces, and chop the straw into almost imperceptible particles, especially when the beasts themselves can accomplish this with the natural grinders?

And, again, why should farmers employ the draining plough to ensure dryness where wetness is the normal condition; and is good likely to result from a violation of nature? Our fathers knew better, and let the marshes alone to produce their rank growth of valueless vegetation, and their noiseome malaria. From the first the husbandman scattered the grains over the earth with his own capacious hands, and the crops yielded, we are told, their thirty, forty, fifty, and hundred fold; we shall adopt no new-fangled and complicated arrangement of tin-cups to deposit the seed at regular intervals in the soil. And is it not a tempting of Providence to make use of wind raised by mechanical contrivance for the separation of the grain from the chaff, instead of taking advantage of such blasts from heaven as can be secured by the opening of two opposite doors and the flapping of a couple of sheep skin wechts? Fanners are the devil’s own invention, an outrage on Christianity, as well as an offence against ancestral practice.

Against such and such many other prejudices, “uttered or unexpressed” on the part of farmers-as well as against the greater mechanical difficulties involved in the construction of locomotive (which most agricultural machines are) as compared with stationary machines-the agricultural implement makers had to contend, and it is in the highest degree creditable to them that they have almost entirely overcome them. And the victory may be said to have been gained within the last dozen years-since the Exhibition of 1851. That international display gave an impetus to what has been called mechanical agriculture, but more properly the mechanics of agriculture, which has never been lost, but which in the interval has been greatly increased. At every show of the national agricultural societies since held, the implements have been assuming a more important position in the yard, until in Battersea, in 1862, they numbered no less than 5064 articles, all more or less connected with the science and practice of agriculture, and designed to effect saving as well as greater efficiency in the labour of the farm.

An indication of the immense number of implements and machines now manufactured for farm use us afforded in the table published in the introduction to the report on English Agricultural Machinery by the Jurors of the late International Exhibition, and given in the Scottish Farmer of last week. The table indeed is very defective, giving only returns of certain kinds of machinery manufactured by some half-dozen of the principal firms; but still it will serve to illustrate the already vast extent and rapidly increasing importance of the agricultural implement trade. Beginning with steam-engines, we find that six firms which in 1852 turned out only 270, in 1861 manufactured 898, an increase of more than 330 per cent. Two firms, which were not in existence in 1852, or whose attention at all events had not then been directed to plough making, in 1861, sent out 9309 of these implements.

Cultivators are of more recent introduction, and four firms, which commenced their manufacture in 1858, made in 1199 in 1861. Corn drills made by three houses have risen from 338 in 1852 to 703 in 1861; and the same number of firms sold in the latter year 383 corn horse-hoes-a number, however, smaller than sent out in previous years. The figures as to reaping machines do not afford even a hint of the real number now in use, but they sufficiently indicate the great and growing feeling in favour of reapers. The four makers who have sent in returns, in 1858 made only 32 reapers, in 1861 they sent out 1715. Hay tedders made by two firms have increased from 50 in 1852 to 721 in 1861; and the horse-rakes of five firms have risen from 611 in 1852 to 1739 in 1861. Six firms in 1852 made 327 thrashing machines, in 1861 the number they manufactured was 1084. The chaff cutters made by three firms in 1855 numbered 1004, in 1861, 4905; and corn-bruisers, by five firms, which in 1852 were but 64, in 1861 were 2680. In the report nothing is said about turnip cutters, of which we know one firm alone, the Messrs Samuelson, of Banbury, makes annually about 4000, and grain bruisers, cake breakers, turnip pulpers, sowing machines, manure drills, corn screens &c, are made in numbers equally large. And what, perhaps, is even as noticeable as the increase, is the improvement in the manufacture of implements since the first Great International Exhibition.

And it is not alone at national and international exhibitions that agricultural implements are displayed; they now form a most interesting and instructive feature at almost all country and district shows. At the exhibition at Ayr last week, for instance, there were no fewer that 254 entries in the implement department of the catalogue. In these entries were included twenty reaping and mowing machines, three of which were sent by the Messrs Samuelson, of Banbury, through their Scottish agent, Mr Pringle-a self-delivering four-armed reaper, calculated to lay the sheaves about twelve feet apart, a very good medium distance; the “Eclipse”, a one horse reaper, of remarkable cheapness, only sixteen guineas; and a combined reaper and mower. Of the simplicity in construction and lightness of these reapers we have before had occasion to speak (see Scottish Farmer for December 31, 1862), and during last harvest we had many opportunities to report, and always favourably, upon the work done by the patent self-acting machine, which has since undergone improvements calculated to lessen the draught and obviate the chances of the gearing getting clagged up.

The Messrs Jack, of Maybole, had six different reapers and mowers on the field, all of excellent and substantial workmanship. Two were designed to affect mechanical delivery-one by merely introducing a reel to throw off the sheaves at intervals. This arrangement we do not believe will ever come into general use; the other plan we think a great deal of. By this latter method, which is the invention of Mr Alexander Jack, the tilting board is divided into two unequal parts, united together by hinges, the portion nearest the cutter or fore end of the machine being the narrowest. The back part of the platform has an angular hinged division made in it to aid in throwing off the sheaves. The tilting board is actuated by many jointed iron arms, which derive their motion from a friction plate in connection with the driving-years, and which, at intervals varying from nine to fourteen feet, according to the nature of the crop, lift up the board and deposit the sheaf. The front part of the platform rises with double the speed with which the hind portion is depressed, an arrangement which would seem to ensure that the sheaf will be well and squarely thrown off. To prevent a short straw crop falling between the platform and the knife, a bar of wood has been placed across underneath. The machine was not completed when we saw it; it wanted a reel to bring down the crop to the cutters, and a better method for communicating the power to the automation arms than by friction will no doubt be adopted; with that addition and improvement, we have hopes that this machine will take a place among practical self-acting reapers. Another improvement we noticed on one of the Messrs Jack’s machines was a hollow cylindrical knife bar, which would appear to secure the advantages of strength and lightness at the same time.

Mr Wallace, of Fenwick, exhibited three reapers of excellent construction, and whose draught, as tested at several trials last years, is very light. One of them has a self-acting arrangement for adjusting the knife bar to the inequalities of the ground-a very useful improvement. Some knife bars are divided in the middle for the same object, but they would not overcome the difficulty of the furrow so well as Mr Wallace’s. A very curious looking reaper was exhibited by the Messrs Wallace, of Dreghorn, mounted on wheels than those of ordinary carts, the driving gear being affixed upon the axle. The fingers were large enough to admit almost half a sheaf at a time. We can say nothing in favour of this reaper, its curiosity being its only attraction. Mr Bamlett, of Ripon, whose agent in Scotland is Mr Begbie, of Haddington, showed a combined reaper and mower-an excellent machine with a tilting platform adapted to various heights; Messrs Brigham & Bickerton showed a Buckeye-a machine which is capable of good work with little expenditure of power; Messrs Brown & Young, of Stirling, showed one of their reapers “with flexible universal jointed platform”; and Messrs Young, of Young, showed a manual delivery reaper. One of Wood’s mowers, with an adaptation to turn it into a reaper, was shown by Mr McCutcheon, of Carlisle; and one or two local makers also showed reapers. On the whole, the Scotch reapers looked very substantial, but perhaps they might be made a little lighter without impairing their strength and durability. They looked rather heavy beside the English ones.

Excellent turnip and mangold sowing machines were shown by the Messrs Young of Ayr, and the Messrs Jack, of Maybole-the merits of which were considered so equal by the judges that they agreed to divide the prize. Both do their work capitally, perhaps as well as it is possible for such machines to work. Messrs Jack also exhibited some capital grubbers; as likewise did Mr Hunter, of Maybole, who showed a large and varied collection of ploughs, harrows, and horse-hoes with side paring coulters, which were greatly admired. The judges’ report, which we give in another column, will indicate the best of the other agricultural articles shown at this very successful county show.”