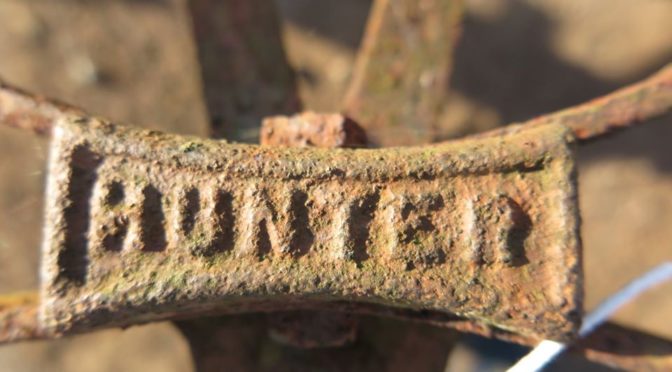 Under the alphabet letter H, we gave a good assortment of makers, some well-known, others less so.

A well-known plough-maker in south-west Scotland was John Harkness & Sons, Newfield Burn Works by Annan. The company was already in operation in 1922 as smiths; from 1930 also as agricultural implement manufacturers. John Harkness died in 1965.

Heggie & Robertson, Priory Bank, Dunfermline, Fife, started in business by 1909, as an agricultural implement maker, mechanical engineer and millwright. The business continued to be recorded in trade directories until at least 1940.

A well-known business is Archibald Hunter, Crosshill Road, Maybole, Ayrshire. It was in business from at least 1851 as a smith until 1948. It largely undertook work as a smith and an agricultural implement maker. It entered a potato planter to the trial of improved potato planters in 1914.

Thomas Hunter & Sons, Maybole, was one of the celebrated and well-renowned Scottish agricultural implement makers. In 1861 Thomas Hunter was a smith at Maybole. His business developed and flourished and by 1883 his address was given as the “Implement Works, Maybole”. He was joined in business by his sons by 1895. In 1905 the business was located in Alloway Road: the “Alloway Road Implement Works”. The business became a limited company by guarantee in 1920: Thomas Hunter & Sons Ltd. That company was short-lived, becoming Thomas Hunter & Sons (Maybole) Ltd in 1924; it was wound up in late 1927. By 1924 the proprietors were Alex Jack & Sons Ltd, a rival firm, and also another well-known implement and machine maker.
Thomas Hunter making its turnip drills, ploughs, harrows, mowers, reapers, turnip thinners in 1883. By 1890 his manufactures included turnip drill and thinners, ploughs, harrows, mowers and reapers. They were summed up as “drills and cultivating tools” in 1909.

Thomas was an award-winning implement maker from an early date. in 1873 he won a silver medal at the Highland Show for two patent turnip thinners and in 1875 a minor silver medal for his collection. At the Royal Agricultural Society of England meeting in 1870 he was awarded a highly commended for Dickson’s patent double drill turnip cleaner.