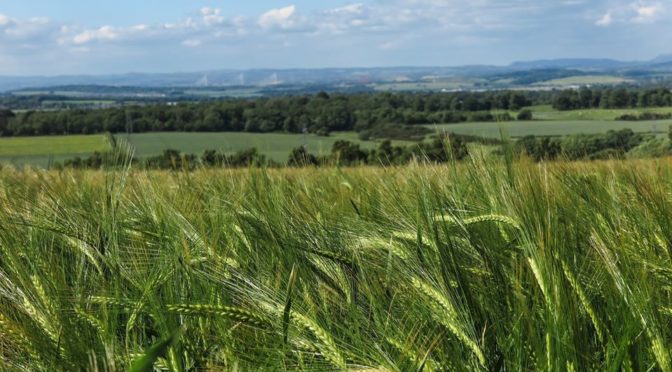 Before the spraying of crops for weed control became common place, much work was spent during the summer months controlling weeds.

In 1805 the farmers and agriculturists of East Lothian had a number of hand tools and implements available to them to tend the crops. Robert Sommerville describes them at length in his General view of the agriculture of East Lothian, published in that year. He writes:

Implements used during the growth of the crops.
The implements, used during the growth of the crop, are the horse and hand hoe, the small and double mould-board plough, the Dutch-hoe, and the different kinds of weed hooks.
The horse hoe or scuffle is so well known as to need no description; that the implement is now so constructed, as to be easily accommodated to any width of a drill; it is used more or less in all drill crops.
Hand-hoe-The hand-hoe is very generally used, as will be seen, when the different kinds of drill crops come to be noticed, it is differently formed, but every variety of it is so well known as to require no description.
Small plough-The small plough is the same as that used for ordinary tillage, but upon a reduced scale, and is used in giving the first, second, and third ploughings, to turnips, beans, potatoes, &c.
Double mould-board plough-That implement differs in nothing from the foregoing, except in having a temporary mould-board of wood added to the left side, and a double-pointed share or sock; it is employed only in laying up the earth equally to both sides of the drill, after the other ploughings are given, and is considered the finishing operation, unless where hand-weeding and picking may afterwards be thought necessary, for taking out such weeds as grow in the drills amongst the crop, and which cannot be destroyed in any other way. This implement is not much used.

Dutch hoe-The Dutch horse hoe, provincially called scraper, is used very generally in cleaning beans or turnips, and a hand-hoe of the same name is often used in gardens; there cannot be a doubt, that, if the drilling of white crops were more general, that implement would be found very useful.
Weed-hooks-The common weed-hook is chiefly used in this county and is a useful instrument for cutting weeds of a certain description, such as thistles, &c; but, as the former of these, when cut either at an early period of the season, or before much rain falls, are apt to spring up afresh and produce four or five stems in place of one, they ought, perhaps, in every instance, to be pulled, or, if they are cut, the operation should be done with a chisel, which, if properly used, will cut them below the surface.

What were your experiences of using these implements in the twentieth century for tending the crops?