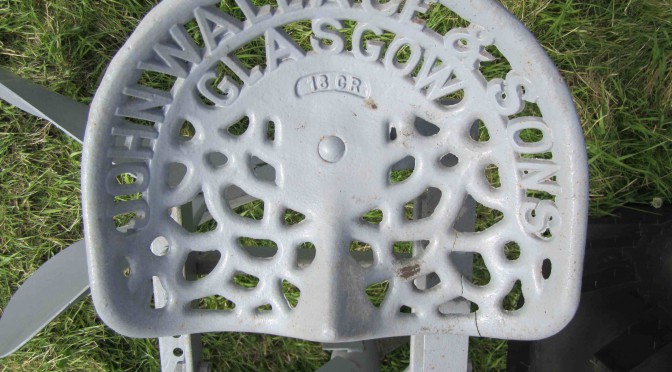 It speaks well for the engineering science of Scotland that it is able to command so much attention in the mechanical department of such a showyard as that of the Royal Agricultural.  We are pleased to hear a recognized authority on agricultural machinery in the ‘Royal’ yard the other day credit Scotland with the parentage of almost all the new features of the present display that are likely to become of any practical value to agriculture.  This is exceedingly gratifying to our friends and supporters on this side of the Border, to whom we offer congratulations on the success of their latest engineering developments.  North British Agriculturist, 13 July 1887

The Scots were renowned for their innovations in agricultural implements and machines from the late eighteenth century onwards. James Small was known for his developments to the Rotherham plough; James Meikle for the threshing machine and Patrick Bell for the reaping machine.  Others were not as well known, but they also made important contributions in the development of a range of implements and machines, including steam ploughing as well as plough development more generally, including the double-furrow plough.

The Scots were practical inventors.  They also made improvements to their inventions, while others in other parts of the world also made further ones.  But they also pursued an excellence in agricultural engineering, recognizing the importance of excellent design, the use of quality materials and a high standard of workmanship.  Many reports from the leading agricultural societies of the day testify to the superior workmanship of their manufactures.

Their inventions and played a significant role in the mechanisation of the country’s agriculture, especially from the mid nineteenth century onwards.  They helped to transform the way the land was worked, and to bring the agriculture of the country to one that had a world-wide reputation for its farming, using the leading farming technologies and methods.  By the late nineteenth century they included implements and machines for the cultivation, harvesting or cleaning of farm crops, as well as for livestock husbandry.

As the demand for new innovations and improved designs grew the industry was transformed.  By the 1860s, the making of implements and machines was becoming ‘a very important branch of manufacture, so much so that it has excited the genius of our best mechanics’.[1]  Foundries sprung up while existing foundries set up an agricultural department.  Local businesses associated with a particular foundry or place emerged in their hundreds, serving local, regional, national and international markets for their implements and machines.  By the late nineteenth century there were hundreds of businesses that made implements and machines for the Scottish farmer – as also those throughout the world.

While every part of Scotland had its own makers – with most being located in the arable areas – there were the ones that were known at every farm-gate throughout the country.  These included makers such as:

Some of the makers had a world-wide standing. In 1876, for example, the ploughs of George Sellar were exported to all parts of the world, and were ‘well-known’ in Australia and America, the ‘colonies and other foreign parts’.[2]  In 1893 the drill and broadcast machines of Thomas Sherriff & Co. of West Barns, Dunbar, were ‘found at work in all parts of the world’.[3]  John Scoular, who claimed to be the largest harrow-maker in Scotland exported his harrows and other implements to ‘many different quarters of the globe’.[4]
Some of the makers specialised in particular implements and machines.  J. D. Allan & Sons was renowned for reaping machines and potato diggers, G. W. Murray & Co. for ploughs, sowing machines and thrashing machines, while George Sellar & Son, as noted had a world-wide reputation for their ploughs.  Others had a wider manufacturing base.  Thomas Hunter made ploughs, turnip drills, turnip thinners, harrows, mowers and reapers.
Especially from the 1870s makers also started to act as agents for other makers, usually English ones, a practice that started to gain in important in the following two decades.  They allowed their own manufacturers to be sold along with those of other makers which they did not themselves maker.  By the 1890s the implement warehouses started to emerge, providing farmers with a  full range of agricultural implements and machines for the cultivation, harvesting and processing of their crops and livestock husbandry requirements.

The Scottish agricultural implement and machine makers have left us with a rich history of engineering excellence, but one that has not been widely known or recognised, even today.