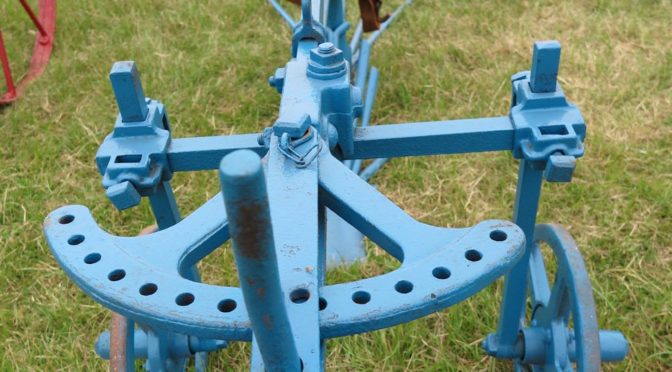 While we may think of the tattie spinner as an “old” machine, it was patented by J. Hanson in 1855. Before that year, and also well-into the twentieth century, a much older implement was used to harvest the potato crop: the potato plough.

Henry Stephens described the use of the potato plough in his The Book of the Farm in 1844. He writes:
“In employing the plough to take up potatoes, the common one, with 2 horses, answers well; but as the potatoes run the hazard of being split by the coulter when it comes in contact with them, it should be taken out, the sock being sufficient to enter the plough below the drill, and the mould-board to turn them out of it. The plough in going up splits one drill, and in returning splits the next, but no faster than a band of gatherers, of field-workers, if numerous enough, but if not, assisted by hired labourers, can clear the ground of them into the baskets. In free soil potatoes are easily seen and picked up; heavier soil is apt to adhere to them, in which case it is a good plan to make a stout field-worker shake those portions of the earth turned up by the plough, which still adhere in lumps, with a potato grain, and expose the tubers.”

Given the labour-intensive nature of the plough, developments were made to improve it for harvesting potatoes. By 1844 John Lawson of Elgin had developed a mouldboard shaped device of six malleable iron bars which were attached to the right side of the head and stilt of the plough. For Stephens, this had a number of advantages: “The mode of operation of the brander is, that while the earth partly passes through it, and is partly placed aside by it, the potatoes are wholly laid aside, so there are few of them but are left exposed on the surface of the ground.”

Lawson’s potato plough or brander was drawn by a pair of horses: “in working it, the ploughman inserts it into the potato drill so as to have the whole of the potatoes on his right-hand side. He then proceeds along the drill, splitting it up in the common way. The earth is this thrown to the right-hand side, and the potatoes lie scattered on the surface of the ground behind the plough. Women follow, provided with baskets, into which they gather the potatoes, and throw the stems upon the drill which lies to the right hand side of one from which they are gathering the potatoes. … A man with 1 pair of horses will thus pass over the ground as quickly as with the common plough. In light soils this plough performs its work in a very efficient manner. It pulverises the soil in an extraordinary degree, and scarcely leaves a single potato in the soil.”

In 1889 the potato plough was used to harvest the tattie crop in certain situations. Henry Stephens notes:

“On farms where the potato-digger has not been introduced, or on fields very steep and otherwise unsuitable for the digger, the aid of a plough of one kind or other is usually invoked in lifting potatoes. In some cases the double mould-board plough is used; in others, it is the ordinary single furrow swing-plough; in others, the American chill plough; while not a few employ specially fitted “potato-ploughs”.

He adds that: “The “potato plough” may be an entirely distinct implement, or an ordinary plough fitted with a potato-raiser-a series of iron or steel fingers running out from one or both sides of the body of the plough.
The specially fitted ploughs are certainly superior to the ordinary ploughs for lifting potatoes, yet it is generally agreed that if a separate implement is to be procured for this work, that implement should be the potato-digger proper.”

Potato ploughs continued to be used well into the twentieth century. By that time they tended to be used for specialist tasks, such as harvesting first earlies which required to be gently handled. But they still remained one of the ways in which potatoes were harvested in Scotland. The others were the spinner digger, the elevator digger, and the mechanical harvester which was starting to be developed to alleviate the problems of securing sufficient labour to harvest the potato crop.

The photographs of the potato ploughs were taken at the Fife Vintage Agricultural Machinery Club Farming Heritage Show and Annual Rally, June 2016 and at the Highland Folk Museum, Newtonmore, May 2015.