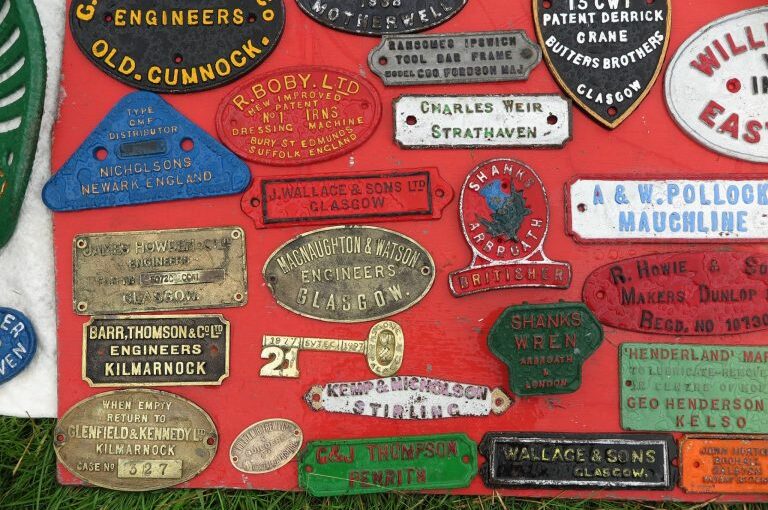 A century ago there was an “imposing exhibition” of implements and machines at the Royal Show which was held at Derby. While the Show was largely attended by English makers, a few Scottish makers also attended. This year they had an “imposing display” These were among some of the most important ones with nationally known – and also international – reputations. Their attendance provides information about who were the important makers in Scotland and what implements they saw as being important for the English market.

The Scotsman provided a comprehensive account of the Scottish implements at the Royal Show in its pages on 28 June 1921. It is worth quoting at length:

“The Scottish implements trade is well represented in the imposing exhibition. In the implement section, which was the only department open to-day, several firms from the other side of the Border exhibit typical collections of the agricultural appliances which are manufactured in the northern part of the kingdom, and in the products of which the makers show a considerable amount of skill and enterprise. Two of them are from Ayrshire, and are firms which are never absent from the national Shows of England and Scotland. Messrs Alexander Jack & Sons, Maybole, as usual, represented by a selection of implements so long associated with their business. They have always made a speciality of their Caledonian and Imperial potato diggers, and these are shown with all the latest improvements. As specimens of their manure distributors they exhibit four of the new finger-wheel delivery class. The farm carts with coup body are a type which the firm have introduced from Scotland to England.

Messrs Thomas Hunter & Sons, Maybole, have a stand is useful articles, including their manure distributors with transport and ordinary chain, and cultivating appliances. The enterprising makers, Wallace, Glasgow (Ltd), are the largest of the North country exhibitors, their stand comprising some thirty different articles of farm husbandry. In the forefront are their well-known Glasgow tractors, which have received with great favour by prominent farmers in the Lothians and throughout Scotland and England. One of the tractors is shown on an inclined green bank, illustrating the hill-climbing feat which it performed at the recent Lincoln trials. They also show the Oliver self-lift tractor ploughs, automatic tractor disc harrows specially designed for light tractors, potato planters, and diggers, and a combined double-drill plough and manure distributor.
Messrs J. & R. Wallace, Castle-Douglas, show, in addition to different types of manure distributors, their milking machine, which is a popular labour-saving device in the dairies of the South-West and West of Scotland. It is now fitted with the new ball type pulsator, which requires no oil. Messrs William Elder & Sons, Berwick-on-Tweed, have no fewer than sixteen separate articles on view. Their broadcast sowing machines are shown in various sizes, and have been adapted to suit different quantities of seed. Prominent on the stand is a turnip-cutting cart. Their double-drill turnip, mangold, and rape sower is fitted to sow ten different quantities of seed. Hay bogies, scarifiers, and other articles in use at this season are included in a varied and extensive collection.

Among the exhibitors from Aberdeen are Messrs Robert G. Garvie & Sons, who show a combined portable thresher and oil engine mounted on a rigid frame, and fitted for use by one or two horses, threshing machines, and manure distributors. Messrs Barclay, Ross & Hutchinson exhibit the Austin tractor thrashing machines, manure distributors, and a cultivator. The Bon Accord Engineering Company have on view a thrashing machine, 3 feet 6 inches wide, and two smaller types, oil engines, pumps for water or liquid manure, and drain-clearing rods. Messrs Marshall & Philp, Aberdeen, show a series of spraying machines for limewashing and fruit trees. The known Aberdeenshire makers, Messrs Sellar, make a feature of their ploughs, which are shown in great variety. Their wave disc manure sower and their scarifier disc drill are implements of proved utility. Among exhibitors of wind-mills are Messrs Millar & Sons, Annan, who show two of their wind-mills and pumps suitable for different requirements. They also show their automatic cream separators, combining petrol motor and separator in one unit, as well as churns.

Messrs Watson, Laidlaw & Company, Glasgow, exhibit eight “Princess” cream separators of various sizes, the largest having a capacity of 330 gallons. The Dairy Supply Company have an extensive stand on which they show the Amo milking machine, a pasteuriser, a complete milk plant for grading, a “milk cream separator”, and other dairy utensils.
The East Lothian maker, Mr David Wilson, East Linton, has half a dozen exhibits. The principal one is his potato raiser a machine adapted for raising potatoes, sugar beet, and bulb crops. He also shows a one-horse potato haulm cutter, potato sorters, a potato washing machine, and a mixing machine and riddle combined for mixing artificial manures.”

All of these names are ones that come up again and again as attending at the Royal Show. The manufactures are of particular types: the basic implements and machines required on a farm, as well as threshing machines and oil engines which utilised the Scottish engineering tradition. They also show innovation, as in the Glasgow Tractor. Their manufactures can still be seen around the rally fields (in non-covid-19 times).