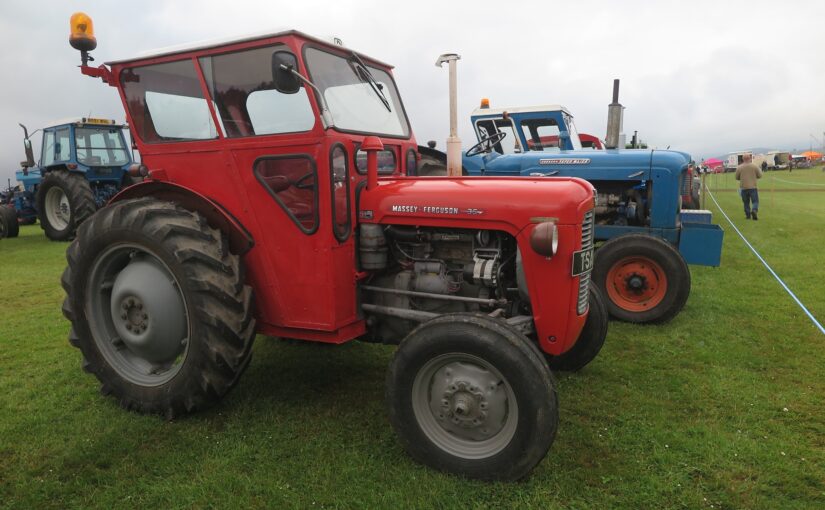 There were a small number of tractor cab makers in Scotland in the second half of the twentieth century. They included Reekie Engineering Co Ltd, Arbroath, Ryeside Agricultural & Engineering Works, Dalry, Ayrshire, Scottish Aviation Ltd, Prestwick, Ayrshire and Alexander Duncan, Inchbroom, Nigg, Aberdeen. At its height, there were 25 tractor makers in Britain making tractor cabs.

The largest of the makers was Alexander Duncan, Inchbroom. Alexander Duncan was the son of a farmworker. His father was grieve at Cairnbrogie, Oldmeldrum. He served his time as a millwright with James Milne, Aberdeen. He started a joinery business in 1954 which manufactured caravans in the summer and tractor cabs during the winter; he started full-time cab production in the 1960s.

The name Alexander Duncan is first recorded in agricultural trade directories in 1959. By June 1961 it had become an incorporated company: Alexander Duncan (Aberdeen) Ltd, a name it continued to use until it ceased business in 1999.

The business was an innovative one. In its early days it exhibited at the Highland Show. It is recorded in the show catalogues for 1959 to 1965. In 1964 it entered its safety and anti-roll frame for tractors for the New Implement award at the Show. In 1971 it was developing a new cab designed to cut out tractor noise – the Super Safety Cab: it was rubber mounted and fully enclosed.

An article in the Aberdeen press and journal of 14 August 1970 provided some insights into its business and range of activities. Mr Duncan said “We make cabs to fit any British tractor. We make cabs for about 25 different kinds of tractor models. All our cabs within the next two months will be fitted with quick release mechanism … they are the most advanced in Europe. We have capacity to make about 100 cabs a day. At present, we make about 125 a week and to lift that to 100 a day would mean trebling our labour force to about 70 men.”

The early and mid 1970s were exceptionally good years for the business. On 23 December 1971 the Aberdeen Press and journal noted that it was “working flat out” to produce orders for home and export. It had large orders from Portugal and Poland, in addition to extensive consignments, including ones behind the “Iron Curtain”: “Currently they are working an 11-hour day to keep up with business and, even with those hours, such is the pressure of work that they find themselves falling behind.” At that time it made around 80 different models.

When it launched its new low noise cab in February 1972 there was a significant demand for it. It resulted in extensions to the factory and the 80 strong workforce; a new steel store was built by early 1975. On 13 April 1972 the Aberdeen Press and Journal carried an interview with A. Duncan: “We have developed a new cab giving dramatic reduction in noise-level to the operator, but the demand for the cabs we make just now with the staff 100 cabs behind orders, although they are working at least a 10-hour day, will probably mean. More rebuilding and more men to get our new cab into full production.” The cab was used on tractors such as Roadless Traction for their high-end horsepower Ford-engined machines. At that time the business was making 100 new cabs a week.

By January 1975 the business had a backlog of 3000 cabs; it also had to refuse orders at home and abroad. That backlog was dealt with by contracting work out to other businesses in the north of Scotland and Duncan’s undertaking final assembly and painting itself. By March 1975 the Aberdeenshire Evening Express noted that the business was producing 500 cabs a month and had a backlog of between 200 and 300 orders. Its staff had increased to more than 100 workers. By that time it was producing a range of optional extras including a heater. For operators in dry and dusty conditions it also produced an air-filtering and purifying unit.

Alexander Duncan (Cabs) became the last tractor cab manufacturer in Britain. It closed its doors in 1999. In an article in the Aberdeen Press and Journal on 11 September 1999 Robert Duncan noted: “The decline has been a gradual process. Many manufacturers started fitting their own cabs in the 1970s. All the cab manufacturers have now become large multi-nationals – and even some of them are now going together.” He noted that in its hey-day the plant employed 90 staff and made cabs for Massey Ferguson, John Deere, Ford and David Brown.

Here is how the Aberdeen Press and Journal described the legacy of Alexander Duncan (Aberdeen) Ltd on 12 November 1999: it was “one of the UK’s biggest tractor cab designers and builders in its hey day as well as the last independent manufacturer in the country.
The Duncan cab became legendary throughout the agricultural world when tractors came without cabs fitted as standard.” It produced over 80 different models for 25 different kinds of tractor manufactured in the UK.