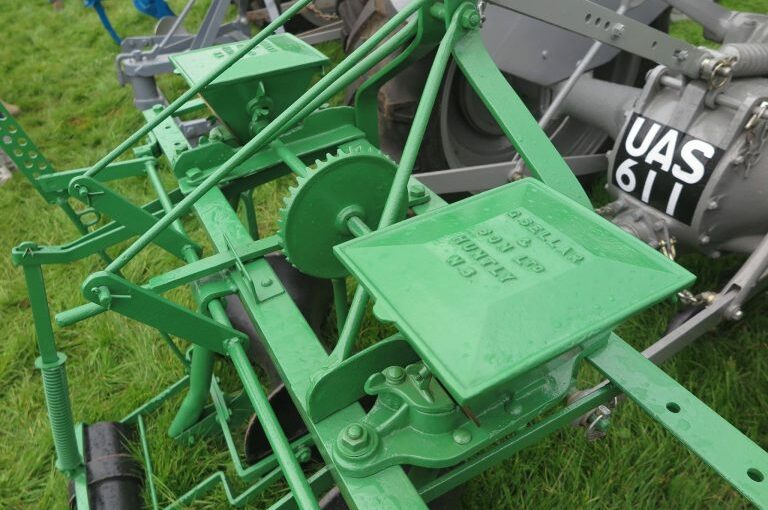 The Highland Show was the great stock and implement show of Scotland. In non-covid times it was much looked forward to. It’s proceedings, including its stands, their contents, stock entries and their winners were widely reported in the press. This included not only the agricultural press, the national press but also the regional and local press. Journalists were sent to report what was important for the local farmers to see and know about.

In 1921 the Aberdeen daily journal sent a reporter to the show. They provided a lively account of it – it was a huge show. Its main focus was on who and what from Aberdeen and the north east was at the show. It was a kind of home from home. If you are interested in an account of the contribution of north-east makers to the implement department then this is a really good one.

“This year’s display of farm and garden implements, machinery, and dairy utensils probably forms one of the largest exhibition of the kind seen in Scotland. Everything required by the agriculturist, no matter what branch he may specialize in, can be seen. Fly papers for the dairy, patent penny collar studs, and traction engines and threshing mills are all on view, and the collection is one of the most comprehensive seen at the Highland Show. All the leading manufacturers in Aberdeen and the north are represented by stands, and, given good weather, they look forward to doing good business. The venue of the show this year is within reasonable distance of the large industrial and implement centres in Scotland, and perhaps this explains the large display of machinery. As an engineering proposition, the exhibits are most interesting, but it is their utilitarian and labour-saving value that will appeal most to those who inspect them. The north firms have shown commendable enterprise in adopting the very last class of machinery and implements, and all the very latest improvements.

One of the features of the motion yard was the display of tractors and threshing machines and light oil-driven engines suitable for nearly all kinds of farm work, including the manufacture of electricity for lighting and power purposes.

Mechanical farming
It is evident, without doubt, that the mechanical element in farming is having a greater influence on the industry than ever before. It would seem that in course of time, if the present trend of development is continued, there will be little manual labour required on the farm. In addition, new methods are being adopted in the treatment of seed and manures, all with the one object of increasing the yield of the crops and improving the quality. The same applies to animal feeds. Even the farmer himself is not neglected, for he is notified at several of the stands what style and quality of clothes and boots he should wear.

The new implements and machinery include a 2hp mower called the Viking, a 3hp oil engine by Armstrong, Whitworth, and Co. All the necessity for external lubrication has been eliminated; and a special design of bearings introduced which double the life of the same. There is a sheep drain-cleaning machine invented by Mr James Parker Smith, Auchterarder. It is made to clean sheep drains measuring up to 22 in wide on surface by 14 in deep and drain bottom 9 in wide. There is also a new type of manure distributor, a patent sheaf-binding harvester, a revolt drain excavator, a new type of threshing machine from Holland, a self-propolled engine-driven turnip cutter, a nine-tined universal cultivator with self-lift gear and expanding axle, a new implement for collecting and ricking hay, a new patent turnip thinner, a stationary air-cooled single sleeve-valve engine with two speed drives and the high speed of 1000 revolutions per minute. It consumes paraffing, and has a slow speed of 500 revolutions per minute. There is also among the new implements an expanding horse how and a new patent traction coupling.

Principal stands
The following are among the principal stands-Stand no. 53-Messrs Wallace (Glasgow), Limited, on stand no. 53 display a very representative collection of farm implements and machinery. The two outstanding features of their exhibit are the “Glasgow” tractor and the “Glasgow” single sleeve valve farm engine. Of the former much has already been written both from an engineering and a farmer’s point of view, so that it does not call for extensive comment. The recently published list of testimonials bears evidence of the great satisfaction which users are deriving from the “Glasgow” tractor.

The outstanding difference between the “Glasgow” and other tractors is that the formerly having three-wheel drive transmits its power to the drawbar in such measure that the manufacturers claim its greatest success is exactly where others fail-under heavy conditions and on hilly land. A signed guarantee is given with every tractor, covering a period of twelve months. A rather novel method of showing the drawbar merits of the “Glasgow” tractor is on view in the form of a large clock-like face showing the drawbar pull necessary for a two furrow and likewise for a three-furrow plough, and further round the dial the hand points to drawbar pull of the “Glasgow” showing a big reserve over what is necessary for a three-furrow plough.

The single sleeve valve engines are on view fir the first time at the Highland Show. They are air-cooled, and are models of neatness. Their principal feature is simplicity, having 70 per cent fewer parts than the usual type of small farm engine. The samples shown are 2 ½-3bhp according to the list, but dynamometer tests have recorded 4.25bhp so that there is a considerable margin of power. Considerable orders, it is understood, were placed at the Royal Show for supplies of these engines, and arrangements are well forward in the factory for large output. Messrs Wallace (Glasgow) Ltd, have at the exhibition their usual varied collection of their well-known specialities.

Mr J G Fraser, Springhilll, Douglas
Stands nos 33 and 34-Mr J G Fraser, Springhill, Douglas, has an attractive implement and machinery stand. All the latest in oil engines can be seen here. They have been tested and tried for a variety of purposes, and have performed all that was required of them. The workmanship and finish are of the very best. Oil engines cab be had at prices from £120 to £250 each; saw benches, saws, &c for £50; corn bruisers, £60; combined crushing and grinding mills, £55 each; small combined grinding and sawing machines, £40 each; a d roller mills made by the DSA Engine and Machine Co., £50 each.

Messrs Barclay, Ross and Hutchison
Stand no 58-Messrs Barclay, Ross and Hutchison, Ltd, agricultural implement makers, Green, Aberdeen, occupy Stand no 58, which has a frontage of 30 feet. They show two portable threshers and one semi-portable driven by Austin tractors. They are high-speed threshing machines, built of the best selected pitchpine. They are suitable for threshing oats, wheat and barley and presenting them fit for the market. There is also on view a Ruston and Hornsby petrol and paraffin oil engine for driving any of the threshers. A feature of this stand is the firm’s wave-disc manure distributor, which has been so long on the market as a favourite that so far there is nothing to beat it. The prices of the threshers and manure distributors have been greatly reduced, and it would ceryainly pay farmers to call here and see for themselves what the firm can offer them. The firm also show their famous Balmoral cultivator, besides a large selection of other implements.

Strichen Engineering Works
Stand no. 30-Mr James Crichton, Engineering Works, Strichen, has a 40-feet covered in stand. Farmers visiting this stand will find much to interest them. There are a variety of threshers of the best possible workmanship and material. A 3ft 6 in stationary finishing thresher makes a first-rate job, and the price is only £400. For a similar figure a 3ft portable finishing thresher can be obtained. There is also a 24in high speed thresher at £180, a 24 in medium speed at £160, and another similar one at £125.

Messrs A. Muller, Aberdeen
Stand no. 83-Messrss A Muller and Co., Aberdeen, have on view at Stand no. 83 a splendid display of high-class engineering tools, including a range of “Mulco” boring, punching, and shearing machines. The “Mulco” boring machine is supplied in six different types, one of which will meet the requirement of any trade. The boring capacity is up to three inches, and the larger machines are fitted with many improvements, including automatic feed and stopping arrangement. The “Mulcho” punching and shearing machines are shown in many types either for hand or for power. A novelty is the “Mulco” reducing sleeve and nut. This ingenious article does away with the necessity for hammers and file0ends to release sleeves, and thus preserves spindles, drills and chucks. Another feature is the self-centring chucks, as well as many other minor articles interesting and necessary to the engineering trade. A speciality is made of seamless milk-cans, which, for hygiene and economy, are meeting a long-fely necessity.”

Lots of big names from the north-east at the Highland of 1921.