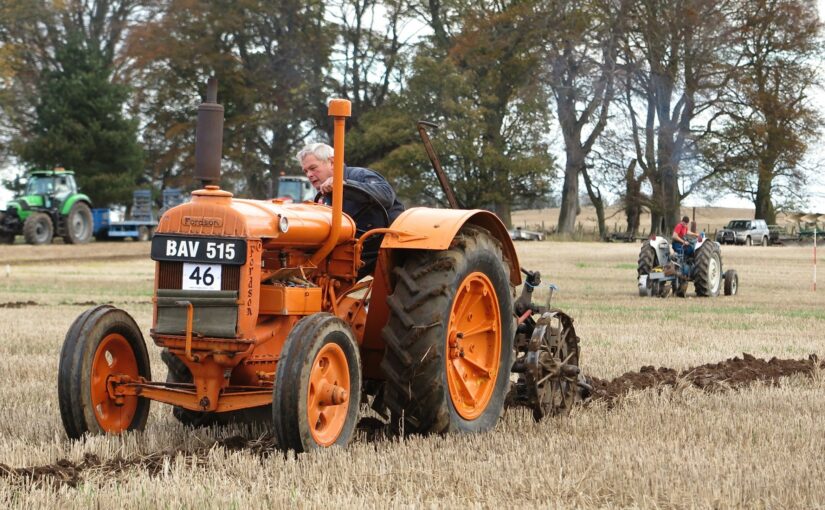 Ploughing and plough men had a number of a traditions associated with them. These include the secret society of the Ploughman’s Word, Plough Sunday, and ploughing matches.

One tradition that was known in some parts of Scotland was the love darg. Darg was the Scots work for work. This was a day’s work done for love, a gesture to show affection and recognition of an agricultural community to one of its members. This could be a farmer who had recently taken on a lease and was needing assistance with his work; it could be a woman who had recently lost her husband and needed work undertaken; it could be to thank a landowner for all his support in a community before he left it. Love dargs could take place for a number of agricultural activities, though threshing and ploughing were especially noted.

In some parts of Scotland love dargs for ploughing were recorded from the mid 1850s until at least the start of the twentieth century and even later. One such area was Kincardineshire. One of the first dargs recorded in the local newspaper, the Stonehaven Gazette, was in February 1852:

“A love darg – Mr Robert Sievewright, millwright, Longhills of Rickarton, having taken a course of cropping of some of the home parks, a number of his neighbours offered to give him a love darg. Accordingly on Wednesday the 28th ult, 12 ploughs appeared on the ground, and soon turned the green lea into a well ploughed field. The ploughmen were regaled with refreshments throughout the day; and in the evening, Mr Sievewright entertained the farmers and their wives to dinner and tea. Under Mr and Mrs Sievewright’s hospitable roof they spent a very comfortable evening.”

This included elements that were to be recorded in later years: the giving, free of charge, of a day’s labour to a neighbour in need; the provision of refreshments throughout the day; the giving of refreshments and sometimes entertainment in the evening after the work was undertaken.

The ploughmen at the love dargs included farmers, though more usually farmer’s sons, and farm servants, in a district where the event was being held.

Some of the dargs could be large. In 1855 one in the Banchory district at Broomhillocks had 37 ploughs. Another in that district had 57 ploughs. In 1856 one at Midtown of Barras had 107 ploughs. While intended to show kindness to a neighbour, they became very competitive. Indeed, some had judges and gave prizes. By the 1890s local businesses sponsored prizes. Classes included the best ploughing, the best start, the best finished, the best harness.

The sociable nature of the dargs is summed up by an account of one at Netherley in March 1867:

“On the afternoon of Saturday last, a number of the farmers in this district sent their ploughs to the number of fifteen to the farm of Mr Alexander Black, Lairhillock, for the purpose of giving him a friendly love-darg in forwarding his ploughing, and as a mark of respect for him as a neighbour. The weather being very suitable, the spirited ploughmen vied with each other who should be foremost in making good work. By six o’clock they had turned over upwards of seven acres in first class style. During the progress of the work, the ploughmen were liberally entertained to refreshments. In the evening, the farmers with several friends met at Lairhillock by invitation, where they partook of the well-known hospitality of Mr and Mrs black. A number of appropriate speeches and toasts were given, and after spending an hour or two together in an exceedingly agreeable manner, the company separated wishing every prosperity and a good crop to Mr Black.”

Did you remember the term love darg? Have you participated in one?

The photographs are of the Easter Ross ploughing match, November 2016.