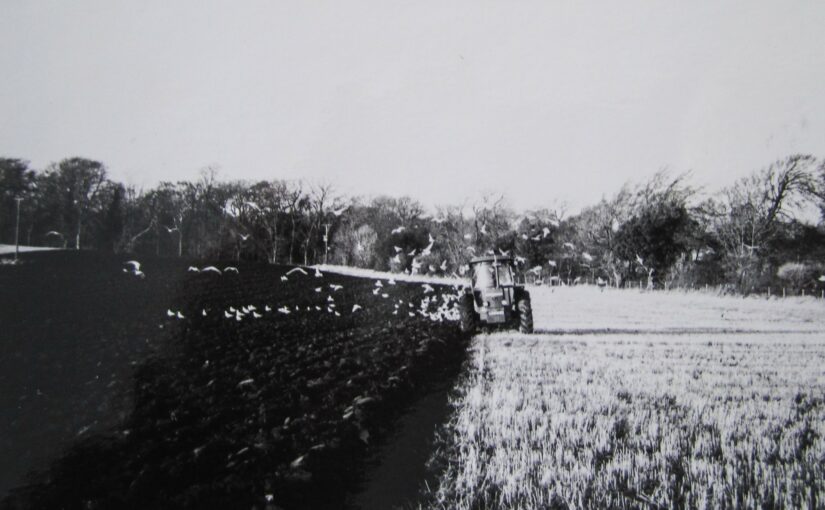 One local ploughing match that has been carried on for many years was held at Currie, Midlothian. A match was held in the Currie parish by 1840. By 1866 there was already a Currie Ploughing Society that held an annual match at various locations in the parish. It appeared to be a large match – and also a very competitive one.

Accounts from the Scottish newspaper press give details of the matches, including the winners and the competitiveness of the match. It is interesting to note the names of winners from the same farms, even over a long period of time.

Ploughing match, January 1840 (from the Caledonian mercury)
On Friday the 17th inst., thirty three ploughs stated in two fields of lea at Ravelrig, in the parish of Currie, the property of Robert Davidson, Esq, who had very handsomely given to the tenant, Mr Robert Proudfoot, Gorgie Mains, a sum to be awarded as prizes.

The ploughmen in Currie parish have long been held as excelling in their art, and in the present instance their character was well maintained by the remarkable straightness of the furrows, and the close observance to the depth and breadth of the furrow slices, as specified by the Judges.
The Judges, Messrs Stevenson, Penman, and Proudfoot, after a very careful inspection of the work, awarded the prizes as follows, viz-
North Field – 1st prize, John Glendinning, Currie; 2d J Gardner, Cockburn; 3d William Sommerville, Shothead; 4th James Allan, Harley; 5th Edward Fleming, Riccarton Mains
South Field – 1st prize Andrew Anderson, Harley; 2d John Binnie, Cocklaw; 4th James Dunn, Malleny; 5th Thomas Cunningham, Kenleith.
The Judges, amd a few of Mr Proudfot’s other friends, afterwards dined at Gorgie Mains, and the party sent a most agreeable evening in discussing various important points connected with the agricultural improvements of the day.

Ploughing match, December 1866 (from the Daily Review)
Yesterday, the Currie Ploughing Society’s annual match took place in the Tomb Park, on the estate of Malleny, the property of Captain Scott. The park has been taken on a short lease by Mr A. G. Cunningham, tenant of the adjoining farm of Rosebank; formerly it was part of the home farm of Malleny, and as such came under the cultivation of one of the lords of the manor who was rather celebrated for the attention he gave to practical agriculture. The morning broke fair, and at the time announced for the beginning of the match that there were nearly two score of ploughmen with their ploughs in order, and horse in fine fettle, waiting the signal to start. Shortly after eight o’clock they broke ground, and continued steadily at work till dusk. In the forenoon the sky overcast, and it was feared that an fall of rain was about to spoil the pleasure of the proceedings, but the clouds drive past, and the afternoon turned out clear, calm, and genial. All the competitors wrought in the one field, which is about 40 acres in extent, and is situated between the eastern approach to the mansion house and the Water of Leith. On the west side of the park, along the water side, is a fine level holm in which about twenty five of the ploughs set to work, while an equal number turned out their lots on the terrace above it, near the avenue. The declivity which runs along the middle of the field was left untouched, and formed a fine promenade for the numerous visitors, who thence obtained a fine view of the busy teams on both side of them.

The land formed a very severe test for both men and horses, as it was lea which had lain untouched by the plough for upwards of twenty years. It was very full of moss, and tough to cut. Notwithstanding the difficulties they had to contend with, the ploughmen made on the average good work, the furs being well set up, cleanly cut, at equal distances from each other, and in lines almost perfectly straight. Some of the lots, as was to be expected where the number of competitors was so large, were rather coarsely done, and the furrows more or less crooked. These were the exception, however, and the fame of Currie as a ploughing parish has been well maintained in this competition. At noon, the workers ceased from labour and partook of refreshments, which were liberally provided by Mr Cunningham. Four o’clock was the finishing hour, but several of the ploughs had not got over their ground by that time, while others were finished before it. Each lot extended to about half a Scotch acre. The judges-Mr Ainlie, Hillend; Mr Elder, Bent, West Calder; Mr Stoddart, Glencorse, Penicuik-awarded the prizes as follows:-
1. James Gilbert, ploughman with Mr Jack, Riccarton Mains, 25s, and the Highland Society’s medal.
2. John Ballantine, with Mr Brown, Cockburnhill, 20s.
3. Alex Dunn, with Mr Davidson, Deanpark, 15s.
4. David Somerville, Shothead, a quarter of mutton, presented by Mr James Wales, Currie.
5. John Baillie, with Mr Auld, Buteland, 10s.
6. David Cooper, with Mr Robertson, Harlaw, 5s.
7. James Dickson, with Mr Davidson, Deanpark, a whip, given by Mr West, saddler, Currie.
Prizes to ploughmen under 21 years of age
1. Edward Fleming, with Mr Somerville, Shothead, 10s.
2. Donald Bell, with Mr Brown, Currievale, 7s 6d
3. Robert Baldie, with Mr Brown, Cockburnshill, 2s 6d.
Special prizes – to the competing ploughman who has the largest number of children alive-A cart of coals, given by Mr Waterston, Currie, was won by James Watt, with Mr Dawson, Warriston.

To the ploughman who has been longest in the services of one master was also gained by Mr James Watt, he having been 25 years and a half with Mr Dawson.
Shortly after the ploughing had been concluded Mr Dawson, Warriston, secretary to the society, called the ploughmen together in the vicinity of the field, and handed the principal prizes to the winners. No dissatisfaction with the arrangements, &c, if it was expressed, and hearty cheers were given for the judges, donors of the prizes, &c.
About thirty gentlemen, members of the society, afterwards dined together in Mrs Fergusson’s Inn. Mr Rowatt, late of Currievale, presided, while Mr Dawson officiated as croupier. Among those present were Mr Ainslie and Mr Stoddart, judges; Messrs Moffat, Kinleith; Jack, Riccarton Mains; Davidson, Deanpark; Robertson, Harlaw; Cunningham, Rosebank; Herbertson. West; Waterston &c. The usual loyal and patriotic toasts, success to the Currie Parish Ploughing Society, the health of the judges, and other toasts, were drank with all the honours, while the proceedings were enlivened by an occasional song.”

The photographs were taken at the Currie ploughing match in 1986.