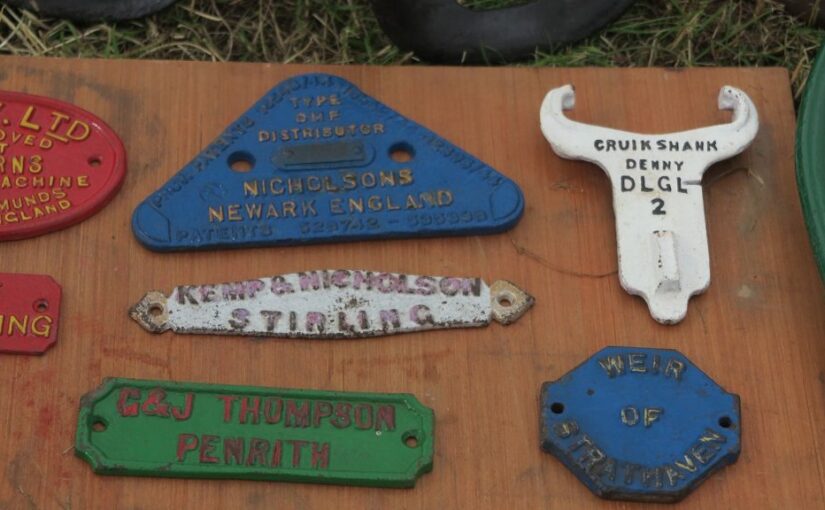 Obituaries can provide much information about the men and women behind the making of agricultural implements and machines, their businesses as well as their wider contributions to the communities in which they lived. We also get to read about their characters and sometimes their temperaments.

We have looked out a number of obituaries from some of the Scottish agricultural implement and machine makers. Some of them will be well-known to modern readers, others less so.

“Fatal accident to Mr Dewar, implement makers, Coupar Angus
Mr James Dewar, well known throughout the country as an agricultural implement maker, died at his residence at Coupar Angus on Saturday from the effects of an accident sustained on Thursday. While in the act if holding a block of wood to a circular saw in his works, the saw caused the block to spring back and strike him on the abdomen. He was at once attended by Mr Lowe, but medical aid, unfortunately, proved to no av. ail. Mr Dewar was an active business man, and had from a comparatively small beginning developed a large and thriving trade in the manufacture of agricultural implements, large quantities of which he sent to England, and shipped to America, in the department beating the Americans on their own ground. Mr Dewar was an enthusiastic musician, and for many years acted as precentor in the Parish Church of Meigle. He was quiet and unobtrusive in character, and was much respected in Coupar Angus, where his death has caused a widespread feeling of regret. He was over forty years of age, and leaves a widow, for whom much sympathy is felt.”

A more well-known maker was John Kemp of Kemp & Nicholson, Stirling, which was known into the 1930s. The business was well-known for making implements for the harvest field including reapers, for which it had a world-wide reputation. The Dundee Courier records in August 1892:

“Death of a well-known agricultural implement maker
Last evening Mr John Kemp, sole partner of the firm of Kemp & Nicholson, died, after a lingering illness, at his residence there. He was in his seventieth year. His firm gained wide celebrity about twenty-five years ago by their adaptation of and improvement of the American reaping machine. Mr Kemp was born at Drumphins Farm, Fowlis Wester, near Crieff, but spent the greater part of his life in Stirling, where he was a Town Councillor and Water Commissioner and merchant of the School Board for several years.”

A well-known maker in the early twentieth century was Archibald Hunter, Maybole, who died in August 1907. The Kilmarnock Herald and North Ayrshire Gazette, recorded his passing in the following way:

“Mr Archibald Hunter of the firm of Messrs Hunter & Sons, implement makers, Maybole, died last Friday afternoon, after a short illness, at his residence, Daisybank, Culzean Road, Maybole. Deceased, who was forty-eight years of age, had a wide connection and was a very familiar figure at all the principal agricultural shows held throughout England, Scotland and Ireland.”

Another well-known maker was Alexander Newlands, formerly of north-east of Scotland and latterly of Linlithgow. He died in October 1907. The Linlithgowshire gazette, wrote on his passing:
“Death of a well-known townsman
We have this week to record the death of Mr Alexander Newlands. Which occurred at his residence at his residence on Friday last after a short illness. Mr Newlands, who was in his 74th year, was a well-known citizen of the burgh, and had carried on business at the Low Port for many years. He was especially well-known amongst farmers and agriculturists of the district, amongst whom he had a high reputation for the making of agricultural implements of all kinds. Mr Newlands was of a retiring disposition, and was not in any way connected with public affairs. The funeral took place on Tuesday to Linlithgow Cemetery and was largely attended.”

Another noted implement maker who died in this decade was David Hally, Auchterarder. The Kinross-shire advertiser of 19 December 1908 provides invaluable information on his exporting activities and his reputation beyond the shores of Scotland. It is a reminder that the Scottish makers made and sold to the world and not just to Scotland:

“Auchterarder
Death of a noted implement maker
The death took place at his residence at Ruthvenside, Auchterarder, on Tuesday last week, of Mr David Hally, blacksmith and agricultural implement maker. Born at Tullibardine in 1814, he had attained the remarkably long age of 94, and was probably the oldest man in the parish of Auchterarder. It is no less than 62 years since he started business at Ruthvenside, and for the most part of that time he has been actively associated with it. He regularly attended Crieff and Perth markets, and was well known among agriculturists, In Perth market especially he was reckoned to be, if not the oldest, then at least one of the oldest attending it. The firm of D. Hally and Son, which of late years had been carried on by Mr John Hally, the deceased’s son, hold a high reputation for making of ploughs, and for several years they consigned large numbers to Australia and Americas, as well as to Ireland and nearly all parts of Scotland. The deceased, who was a Free Mason, was oldest member of the local lodge. He was held in high esteem by the community and others with whom he came in contact, and his familiar figure will be much missed. On the occasion of his ninetieth birthday he was presented by Mrs Haldane with a silver-mounted walking stick as a token of esteem and regard from three generations at Cloan. The deceased’s remains were interred in Blackford Churchyard on Saturday.”

The photographs were taken at various rallies around Scotland.