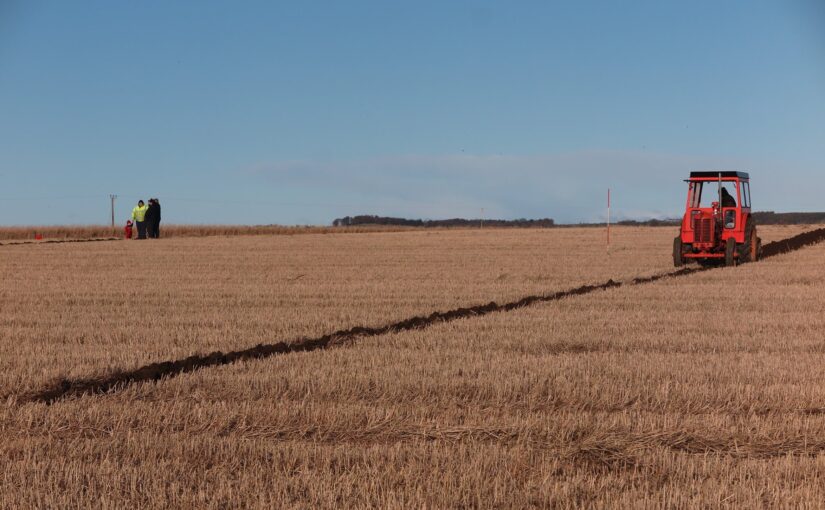 Back in the 1790s the Board of Agriculture and Internal Improvement was starting to encourage agriculturists to arrange ploughing matches so that ploughing skills could be promoted and improved. By that time a small number of agricultural clubs had also recognized the importance of promoting skills in ploughing. These included the Farmer Society of Clackmannan, one of the first associations to arrange ploughing matches. Another early match was held in Kinros-shire, under the auspices of Dr Coventry, the professor of Agriculture at the University of Edinburgh. Enterprising landowners, such as Sir John Clerk of Penicuik also played an important role in stimulating local matches on their estates.

The Scottish newspapers provided a number of accounts of these early ploughing matches. They are worth quoting as they show how the earliest matches were organized and set up, their competitiveness as well as their sociability.

Ploughing match, held 11th Nov. 1785 (from the Caledonian mercury)
We hear from Clackmananshire, that the Farmer Club of Clackmananshire, having concerted to have a trial this season of the ploughmen’s skill in breaking up old ley ground, with a proper seed furrow, the match was undertaken this day upon a field of old grass in Lord Cathcart’s estate, where two pattern ridges had been ploughed the day before by Alexander Verty, the first ploughman who gained a medal from the Farmer Club. Thirty-seven two horse ploughs started, their places upon the field having been taken by lot. The whole ploughmen gave proofs of their skill, which gave much satisfaction to the Club, and to the judges who were called to examine the work. The first premium was adjudged to James Young, ploughman to Mr Andrew Stein; the second to George Verty, ploughman to Mr Reoch; the third to Robert Meiklejohn, ploughman to Mr James Stein; and the fourth to James Pow, servant to Mr Reoch.

Lord Cathcart, who is a member of the Club, afterwards gave an elegant entertainment to the Club, and other gentlemen who had attended to witness so pleasing and so useful an exhibition. It is surprising how much this institution has inspired the ploughmen in that part of the country, with an emulation to excel one another in their possessions.
After the ploughing match was over, a bet betwixt most of the members of the Club, for the straightest line to be drawn by the plough, was gained by Mr Andrew Stein, his ploughman Alexander Verty having drawn a furrow admitted by all parties to be the straightest.

The Kinros-shire annual ploughing match, according to the Caledonian mercury in March 1792 , took place on the 19th current, in a field at Shanwell, belonging to Dr Andrew Coventry, professor of agriculture, when twenty six ploughs appeared in competition. The judges, after examining the work, were highly satisfied with the performance of all the ploughmen, and gave the first prize to Alexander Sutton, servant to Dr Coventry-the second to William Simpson, son to Mr James Simpson, of Maw-kerse-the third to James Inglis, servant to Mr Andrew Stein, of Hattonburn-the fourth to Robert Beveridge, also servant to Mr Stein-and the fifth to Robert Hutton, servant to Dr Coventry.On Monday last, according to the Caledonian mercury, in December 1794, there was a great ploughing match at Pennycuik House. Thirty three ploughs started for the premiums, which were given by Sir John Clerk, Bart. The highest premium was a medal, and a plough made by Thomas Lindsay, at Abbeyhill, with an improved muzzle, by Duncan Clark of Kintyre; and the next, a turnip plough. The judges determined the first in favour of Mr Walter Tait, tenant in Sherswell; and the second, to John Wilson, servant to Mr James Laurie, tenant in Pennycuick Mill. But it is only doing justice to the other persons who ploughed, and who had come from different parishes for the purpose, to say, that tho they did not obtain the premiums, yet the judges declared their approbation of their skill in the art. A very great concourse of people from all part s of the country were assembled; and there is no doubt but much real knowledge in the nature and management of that most useful instrument the Plough, must have been acquired by the young ploughmen who attended on that day; and it is ardently to be willed, that other parts of Scotland would oftner adopt these ploughing matches, which certainly do much good, by creating an emulation and rivalship among that class of people.

When the match was over, Sir John Clerk gave a dinner to several of his friends, and many of the most respectable of the tenants on his estate, and in his neighbourhood. About fifty sat down to dinner in Ossian’s Hall, while the ploughmen, competitors for the premiums, and many other respectable people, were hospitably entertained in another apartment.

The ploughing match of the Farmers Club of the county of Clackmanan, according to the Caledonian mercury in April 1798, was held on Friday the 9th of March, on a field in Mr Erskine of Marr’s farm of Lanshill, in the parish of Alloa. Fifty lots were marked off, but only forty six ploughmen belonging to eighteen different farmers made their appearance.

On the ploughmen, drawing their lots, they repaired to their several stations; but as some of the farmers resided at four or five miles distance, it was eleven o’clock before all the men were ready to begin their work, when, on a signal being given, they all started at the same time.
The desire and anxiety of excelling that appeared in the ploughmen afforded a pleasing sensation to the spectators. The field which had been two years in grass, and was lately divided by the turnpike road passing through it, is most fortunately situated for shewing off to advantage this pleasant and useful exhibition.
It was in tolerable good order, and the ploughing was in general extremely good; but as it is almost impossible to obtain a spot of ground sufficient to hold such a number of ploughs, that every lot should be of equal goodness, the work of the ploughmen cannot appear all alike, as a bad lot will occasion one ploughman’s work looking inferior to his neighbour’s although they possess equal skill.

The judges appointed by the Club were, Mr Andrew Stein of Hattonburn, and Mr James Thomson, tenant in Park, in the parish of Clackmanan.
They, after a minute and careful inspection, appointed the first medal, which includes the Silver Medal.
To James Drysdale, ploughman to Mr John Thomson, tenant in Jellyholm, in the parish of Alloa.
The second premium to William Glass, ploughman to the said Mr John Thomson.
The third premium to Ebenezeer Drysdale, ploughman to Mr James Reoch, tenant in the Hillend of Clackmanan.
The fourth premium to Edward Fotheringham, ploughman to Mr Robert Stein, tenant of the Bows of Alloa.
And the fifth premium to John Donaldson, a young man, servant to Mr John Thomson of Jellyholm.
The work gave great satisfaction to the Club, who have, by this useful institution, rendered this small corner for its ploughmen.-It is believed that there are not many parts of Britain where such a number of farmers can produce in the common way of business forty-six ploughmen able to shew such skill.

The photographs were taken at the Scottish ploughing championships, October 2019