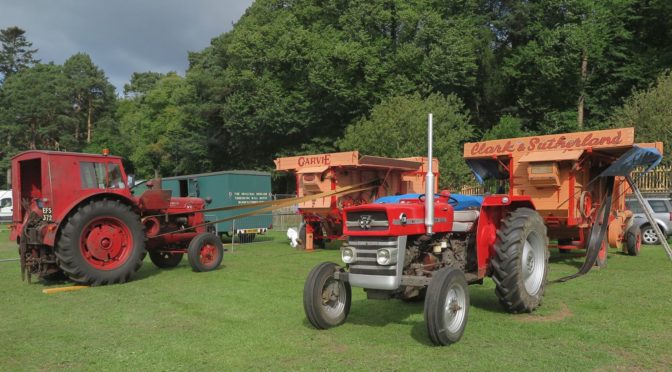 We have a good selection of implement and machine makers under the alphabetic heading of G. We have already written extensively of Robert Garvie so we will focus on some other makers. Just in case you miss Garvie, the photos illustrate one of his threshing mills at work at the Deeside rally in August 2018.

Edward A. Grant, Standfast Works, Craigellachie, Morayshire, was recorded in trade directories from around 1890 to 1951. Grant was a smith who made a number of implements including ploughs, one of which can be seen at the Grampian Farming Museum. Edward exhibited at the Highland Show when it exhibited at Inverness in 1911, 1923, 1928, 1932, 1948 as well as the Aberdeen shows of 1935 and 1951.

Grant & Dargie, Denburn Machine Works, Montrose Street, Brechin, Angus, was an older company, that existed from at least 1869 to 1877; By 1894 it had become More & Dargie. As an implement maker, ironfounder, mechanical engineer, millwright and smith, it manufactured implements such as seeding implements, weighing machines and hand tools. Like Edward A, Grant it also exhibited at the Highland show: in 1869 in Edinburgh and 1876 in Aberdeen.

George Gray & Co., agricultural implement makers, Uddingston Plough Works, Uddingston, Lanarkshire, was a members of the well-known family of Gray of Uddingston, plough makers and reaping machine makers. He was in business by 1875; it continued until after the Second World War. George Gray retired from business in 1945. George was a well-known exhibitor at the Highland Show from 1875 onwards until 1934 and an advertiser in the farming press from 1875 until 1909 and 1919 to 1936.

William Goodlet, Flora Bank, Haddington, East Lothian, was another implement maker from the late nineteenth century. He was both a maker and an agent. In 1890 he was the successor to G. & W. Porteous who had been in business since at least 1858. Porteous was the successor to Scoular & Co. Goodlet. Among his activities he was an implement maker, an agent as well as a cycle maker and manufacturer.