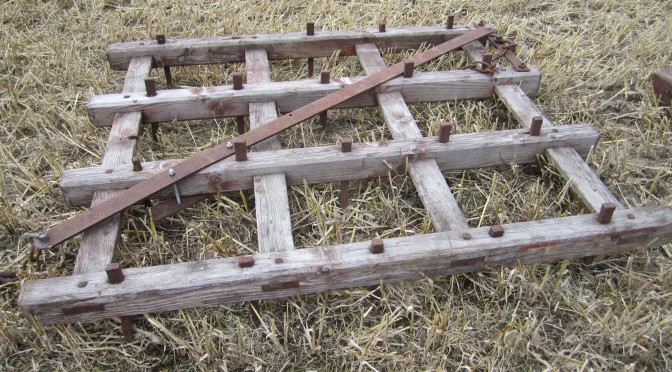 What would vintage agricultural machinery rallies have looked like if they were held two hundred years ago?

Today our vintage agricultural machinery rallies look backwards to the implements and machines made and used in Scotland during the twentieth and the late nineteenth centuries.  They let us see how far our farming technologies have changed and the progress that has been made.  They also let us reminisce about past times and what it was like to work with the implements and machines that we see exhibited.  We connect our past and present experiences.

Two hundred years ago the farming community in Scotland was in a period of agricultural change and transformation, generally referred to as the “Agricultural Revolution”.  If there had been vintage agricultural machinery rallies held at that time – ploughing matches were starting to be held in a number of districts, and agricultural shows held – they would have also looked back to see the huge progress and changes that had been made to their implements and machines in the previous half century.  They would have also been able to identify a number of themes that are familiar to us today in our rally fields. 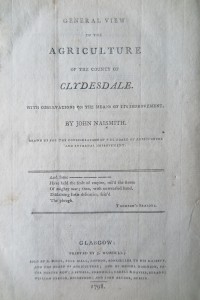 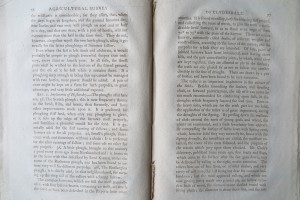 Work on the county surveys had started back in 1793; a second
series of surveys, was started in 1795 and was to be completed in 1817.  Sir John Sinclair, also their initiator, had devised the project upon a systematic plan that ensured information was collected under common headings.  It allowed information from each county to be systematically analysed and provide an account of the agriculture at national levels in Britain and Scotland.  It also let information on agricultural progress in the leading and “improved” districts to be compared and contrasted with that of the less progressive ones and for ideas on agricultural “improvement” and progress to be disseminated.

The county agricultural surveys let us look at what would have been
exhibited at vintage agricultural machinery rallies 200 years ago, had they been held. 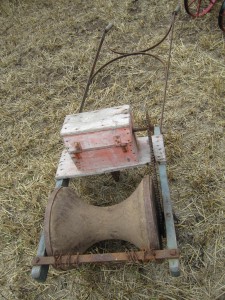 The county surveyors were unanimous in noting the similarity of the
implements and machines used in the various farming districts throughout the country.  But they were also aware that on the ground the picture of what was used was much more complex.  What was actually used was shaped by a broad range of factors such as the character of the farming landscape, the character of the agricultural district (a progressive or a backward district), the character of the farmers (including their social status, wealth and reputation for farming), the size of their farms, and inclination to use new implements and machines.

The implements and machines could be set out in five different classes, as described by Robert Somerville writing of East Lothian in 1805:

1st. Implements for tillage, and preparing the land for seed, comprehending the different kinds of ploughs, harrows, rollers &c.

4th. Implements for cutting down, and carrying the crop: these consist of the sickle, the scythe, and the different kinds of corn carts.

5th. Implements for separating the grain from the straw, and cleaning it for market: these consist of the flail, the thrashing machine, the fanners &c.[1] 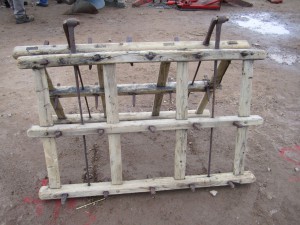 The implements and machines in the five different classes varied from district to district, and had an impact on what could have been exhibited at a rally.  Some were widely used while others were uncommon or not used at all.  Thus, in Elgin in 1894 fanners and rollers had been “partially” introduced while in East Lothian in 1805 rollers were not “universally used”.[2]  In Renfrewshire in 1812 horse hoeing implements were “hardly known” as their operations were not general.[3]  The only drills used in Nairn and Moray in 1813 were for sowing turnips.

Implements were found only in some districts (and were “peculiar”
to them), while others were introduced from other ones.[4]  In Nairn and Moray ploughs had been introduced from Leith and Dundee.[5]  In Ross and Cromarty in 1810, “drill machines are used by some farmers from East Lothian, which settled in Easter Ross some years ago”.[6]  There were also regional variations in the detail of the implements and machines, and local designs developed.  In Galloway the “tradesmen in the county had copied the ploughs brought to ploughing matches from Roxburghshire, Berwickshire, Northumberland and other counties” and incorporated aspects of their designs into their local ones.[7]  Knowledge of local designs was important for disseminating new and better designs of implements and machines.

There was a broadening range of implements and machines to select 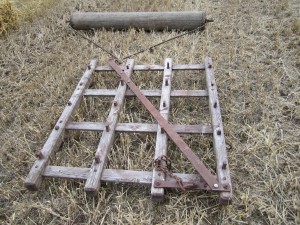 for exhibition.  As the surveyor for Nairn and Moray noted in 1813: “an enumeration of all the articles which are employed in the management of a farm would make a long list”.[8]  There was an increased use of carts, especially the single horse one, while an array of implements were introduced for the growing of the new crops in the “Agricultural Revolution”, notably turnips and potatoes: a broader range of drills, horse hoes, and double mould ploughs.  Threshing machines (“probably the most useful invention ever introduced into the mechanical part of farming”) were being introduced in increasing numbers throughout Scotland; they were also made in a wide array of designs.[9]

Newer technologies were used alongside older ones, and to varying extents.  This was especially noted in relation to ploughs, one of the most widely described implements by the surveyors who sometimes described them and their different uses in great detail.  A number of ploughs were used throughout the country.  In Dumfries in 1894 “the ploughs in general use are, the English plough, the old Scottish plough, and the Scottish plough with the English mould-board”.[10]  The modern plough of the day was Small’s plough, of James Small, Blackadder Mount, Berwickshire: “a very simple and efficient implement, of cheap construction, light draught, and easy management”.[11]  The oldest one was the old Scots plough, which in some districts such as Fife in 1800 “is now almost entirely gone into disuse, and its place supplied by a small light plough”.[12]  However, in others there was a continued need for it.  Thus, in Peebles in 1802, “the Scotch plough, of a light construction, is preferred for lands abounding in stones”.[13]  In Stirlingshire in 1812, it was still “in considerable repute. It answers well for tearing up a coarse and stoney soil”.[14]  The same comments were echoed by the surveyors in Tweedale in 1794 and West Lothian in 1811.  In the Western Isles and Highlands, there was also the cas crom, or crooked foot, a foot plough. 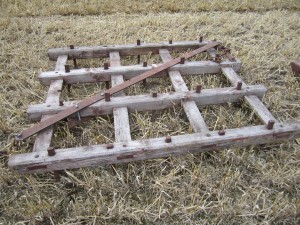 There was a broad range of animal power to assist in farming activities; these could be exhibited in various ways, just as we do today.  There was horse power as well as ox-power from cattle, or horse and ox power combined.  For the threshing mills there was also steam power as well as water power.

The implements and machines were made from a range of materials.
Wood was a predominant material.  It was used on the Scots plough, harrows, rollers (of beech or plane), and carts.  Rollers were also made of granite and whinstone, and sometimes of iron, though in Clydesdale in 1794 this had been “too dear for common husbandmen”.[15]  Iron was a material that was increasingly being used.  As the surveyor for Nairn and Moray notes in 1813; “there is, in short, more iron consumed now in a year, upon any farm of 100 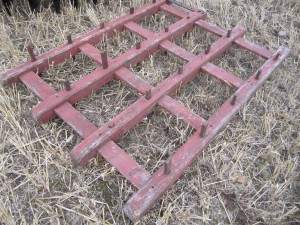 acres, that was used in agriculture 60 years ago, over the whole of this extensive survey, and the value at present of a single plough on such a farm would have then furnished the whole implements of every kind, which any one required”.[16]  Iron was also used for the working parts on wooden implements.  For example, iron teeth were becoming more common on harrows, and metal mouldboards on some wooden ploughs.

There were changes in the ways that implements and machines
were made and constructed.  Surveyors recognised that better designs had a beneficial impact on agriculture and would “facilitate, expedite, and render more perfect, the various necessary operations of husbandry”.[17]  The modern implements and machines demonstrated the appliance of engineering and mathematical principles.  They had better modes of construction.  In Elgin in 1794, ploughs were “improved” while harrows were “of the best construction.[18] ” In 1810 the surveyor of Ross and Cromarty observed that “all the implements used by our best farmers are made from the most approved models”.[19]  Favourable accounts like these contrast to those of earlier years: “about thirty years ago, 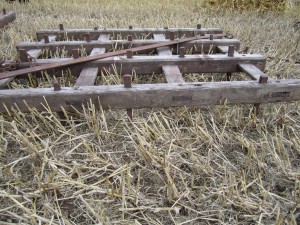 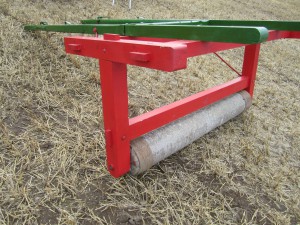 They would have also highlighted themes such as the varying use of implements and machines from district to district (though Scotland’s regional agriculture did not emerge until through the nineteenth century); their increasing range over time; the use of older and newer technologies alongside one another; the use of local designs (look how many local ploughmakers there was in Scotland in the twentieth century); competing sources of power (steam versus gas versus oil); and the changing methods available to make implements and machines.

The implements that would have been exhibited would have included some of the ones that were starting to transform Scottish agriculture – such as James Small’s plough.  But they also included more traditional ones that were to be found in some parts of Scotland until well through the twentieth century when some wooden implements were still used on a number of farms.

Below are links to the county agricultural surveys that have been digitised on Google books.  Some of the surveyors provide detailed accounts of the implements and machines in their county, while others provide only short ones.

For a comprehensive list of the county agricultural surveys see:

The photographs of the wooden harrows, rollers and sower show the twentieth century antecedents of wooden implements used in the eighteenth and early nineteenth centuries.  They were taken at the Strathnairn vintage rally, 2013 and 2014 and the Scottish National Tractor Show, 2013.

All references are to the county agricultural surveys (see links above)