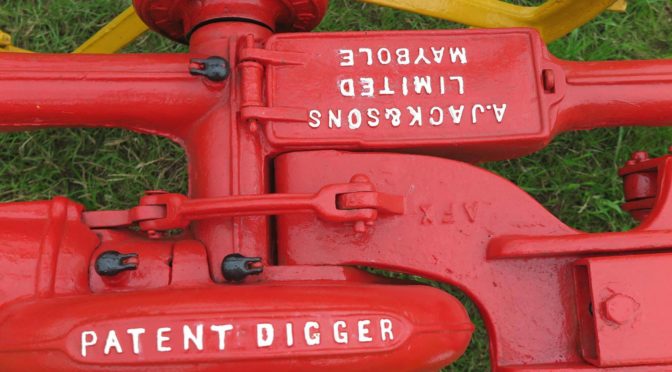 Two of the makers under the alphabetic letter J are well-known.

Johnson’s (Implements) Scotland Ltd, 28 Orchard Place, Stirling, advertised in the Farming News in 1956. In following years it moved premises. By 1960 it moved to Colquhoun Street, and then to Kerse Road, Stirling in 1968. As an agent its well known products such as potato equipment from Johnson, Cooch, Catchpole, Cook, and Kennet in 1967. In 1966 it exhibited at the Highland Show, as a new model the Johnson/Underhaug model 1510 potato harvester invented by F. A. Underhaug (Fabrik), Stavanger, Norway, and made by F. A. Underhaug in association with Johnson’s (Engineering) Ltd. This was an important potato harvester in the development of mechanical potato harvesters in Scotland, especially by smaller farmers interested in harvesting their crop.

In March 1968 Ransomes of Ipswich bought from the Ross Group, Johnson’s (Engineering) Ltd of Cambridge and its subsidiaries Johnsons (Implements) Scotland Ltd, Stirling and the Catchpole Engineering Co. Ltd.

An older implement and machine maker was Alexander Jack & Sons, Agricultural Implement Works, Maybole, Ayrshire. Alexander Jack was first noted in the Scottish agricultural press in 1843 with the name and address Alexander Jack, Sawmill, Auchendrane, Maybole. By the early 1950s he described himself as a wood merchant at Culroy, Maybole.