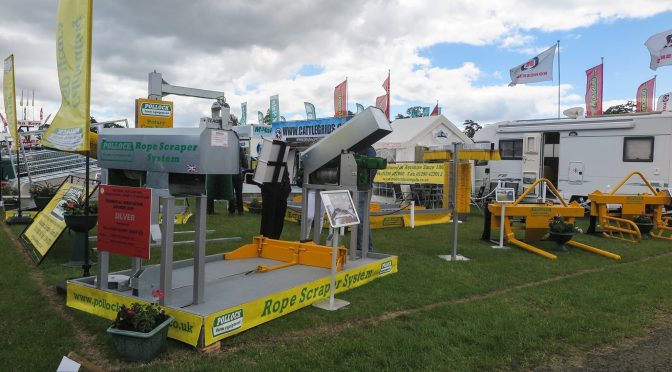 Congratulations to Pollock Farm Equipment which has been awarded a silver medal by the Royal Highland and Agricultural Society of Scotland for its Pollock Rope Scraper System. This is the third medal that the Society has awarded to the company which started in 1867 under the name of Andrew Pollock of Mauchline. Silver medals are awarded in recognition of outstanding technical achievement in the field of agricultural machinery and technology.

Andrew Pollock of Mauchline started his business by establishing a shop in the Cowgate, Machine. By 1877 his address was the “Implement and Machine Works, Mauchline”. He was an agricultural implement maker, a smith and a smith and farrier.

Andrew became well-renowned for his own manufactures, winning a number of awards for them. But it was those implements for cultivation of the soil, hay and straw trussers, potato diggers and cheese presses that he was especially known, even well through the twentieth century. His manufactures were, according to the North British Agriculturist in 1893, “characteristically those designed for farming as carried on in Ayrshire and the adjoining counties”. He was also an inventor, applying for two patents in relation to his machine for topping and tailing turnips in 1878.
He was well-known throughout the implement-making community of Scotland, also exhibiting his manufactures at major agricultural shows including the Highland Show where he was a regular exhibitor from 1875 onwards.

By the time Andrew died in 1904 he had a well-regarded and successful business. His widow, Mrs Martha Jamieson or Pollock, carried on the business until it was transferred to his sons Andrew and William, to form A. & W. Pollock on 31 December 1912. In 1981 the company became John Pollock (Mauchline) Ltd. In 1998 it became Pollock Farm Equipment Ltd.

Details of the company’s history are recorded in Jimmy McGhee’s book, Pollock Agricultural Implement Makers 1867-2017 which is available from Pollock Farm Equipment – http://www.pollockfarmequip.co.uk

The photographs show Pollock’s stand at the Highland Show, the winning implements and some of the company’s manufactures from its 152 year history.