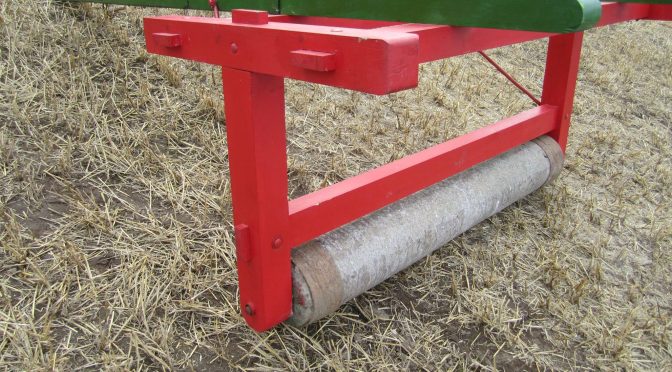 “Implements -Not may years since, these were few in number, and rudely constructed. They have undergone much alteration of late.
The plough formerly used was the Scotch, long and heavy, yet well adapted to the powerful draught of 4 or 6 horses, that were frequently applied. When it was perceived that 2 horses were sufficient for every purpose of tillage, this simple implement was constructed on a lesser scale, but the original proportions still retained. It has since been improved in principle, (made somewhat resembling to the Rotherham Plough) by the late Mr Small at Ford, in this county, who has, on the true mechanical principles, modified the mould-board into such a form of curvature, as to make less resistance to the earth as it is turned up, by which it requires less force to draw, than any other plough known in this county; while the furrow itself is gradually laid over to its proper position.
The mouldboard, as well as the sheath, is now greatly made of cast-iron, on the inside of which is an inscription, bearing, Mr Small’s name, the name of the founders, (Cooper and barker) and, what is principally intended,-the approbation of the Dalkeith Farmer Society. it is now universal over Scotland, and perhaps were it better known in England, it might come to displace the complicated ploughs with wheels and other trumpery with which agriculture there is at present incumbered; as it is not apt to be put out of order, but simple in the construction, and effective in operation, it is adapted to almost every situation. The chain, connected with the muzzle, by which it is drawn, fixed as far back as the culture, is not essential to the formation, serving merely to strengthen the beam, which may be made stronger of itself at less expense, while the tillage is as accurately performed with ploughs that have none. The price is from 40s to 50s.

The harrows, of which there are several kinds, is commonly made of four bulls, connected by four slots, generally four feet square, weighing about 48lbs avoirdupois, besides having 20 iron tunes or teeth, of about alb wt. each. Each harrow is always drawn by one horse; three of which are frequently yoked together under one driver. This implement may be improved in principle by altering the arrangement of the tunes. A pair of harrows cost about a guinea.
Rollers are generally of free-stone, 5 1/2 feet long, 15 inches diameter, weighing, when mounted, about 12cwt drawn by two horses, and cost about two guineas. Every farmer has at least one, for something the grass-lands, to which it is peculiarly adapted; also for breaking the clods of rough land in tillage; in which it is not clear that it is so effective as the ancient clod mallet; for although, in some cases, there may be more work done for the same expense, in general there is less, and not so completely to the purpose, besides giving the whole land, without distinction, the same pressure, whether necessary or not.

Of drilling and hoeing instruments there are many; usually of a plain and effectual construction. The drill-barrow for sowing one row at a time, is a simple machine, adapted to different grains, and small seeds, in any required proportion. A machine of this kind, for sowing several drills at once, and at sich different degree of width as may be wanted, would be a great acquisition, provided it were not too complex.
It may be proper here to take notice of the weed-hook for cutting thistles, &c among standing corns, which, although but a simple instrument, is perhaps the most perfect of any we have. Notwithstanding, that it is constantly rubbing against the ground, when it is used, yet being concave in the under side, the edges are preserved entire for several years. It costs (without the staff) only 2 1/2d and weighs about 2 oz. It is only made, so far as I know, in East Lothian, here it is to be had in the shops in Haddington.
The reaping fork, for collecting into sheaves, corns that are cut with the scythe, will probably be adopted more generally, as the practice of mowing corn becomes more common. The prongs are in practice, pushed in below the swathe, raising accurately the straw from the stubble, while the prongs serve the double purpose of retaining the cut corns from scattering backwards; and of forming the size of the sheaf, which is regularly determined when the straw accumulates as high as the top of these prongs.
There can be no question, that with this implement corn can be collected faster and more regularly into sheaves, than merely by hand labour.

Wheel carriages, employed in husbandry, are only the close-cart, and the corn-cart, both of a light construction; drawn by two horses, and of late by one. The large wains, or heavy four horse wagons, in English husbandry, are reprobated here. Two horses in a cart are commonly loaded with 18 or 20 cwt. One horse draws still more easily 12 cwt; even 24 cwt is frequently put to a single horse, and 30 wt on good road is not uncommon. This cart has lately been much improved: placed on its axle, the bottom at such side projects over the inner head of the naves, as far as nearly to touch the spoke of the wheels; from which acquired breadth, the capacity is enlarged, while the side standards being brought nearer to a perpendicular, are able to sustain more weight. The corn cart, which is only placed occasionally on wheels, for carrying hay, or corn in the straw, is composed of standards, rods, and spars, without deals, but is broader and much longer than the close-cart, that it may hold a more billy load. It costs from 20s to 30s.

Fanners, for cleaning corn, have been in general use here for more than fifty years. They run 12 bolls an hour, and in two operations, or in three at most, the corn is completely cleaned; four people are necessary to attend them, for sifting, riddling &c. Some fanners perform these operations also by which two persons less are required. They cost from 2l to 5l and last 20 or 30 years.
Threshing mills, lately invented, were very soon afterwards introduced into this county. They are now very general, and of various dimensions and construction, wrought by one, or two, or your horses, or by water, which last is the best method of all. One-horse mills a boll in the hour, the others, in that proportion or mor. They cost from 25l to 60l: some perhaps more, particularly when they are made to clean the corn at the same time, which requires more machinery, as well as more space.”

As you can see there were not too many different types of agricultural implements and machines at this time! What a change from today’s mechanised farms!

The photographs were taken at the Strathnairn Rally, September 2014.