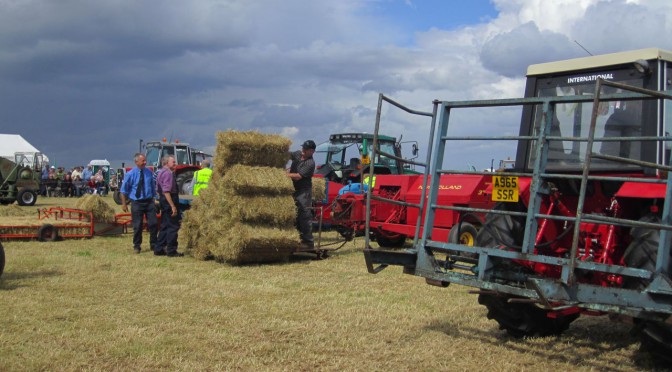 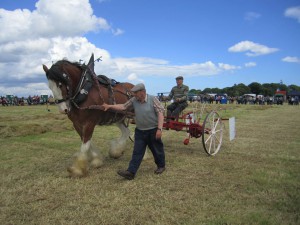 My father used to say that the rattle of the Dickie hay turner would bring on the rain.  Anyone who has made hay or silage will have their own sayings and recollections of the trials and tribulations in trying
to win these crops.  Wet seasons are easily remembered (and have their own life in the farming memory), the dry ones are too easily forgotten.

Memories of haytime were evoked during a visit to the 2014  annual rally of the Fife Vintage Agricultural Machinery Club, whose theme was hay and beef.  The day told the story of haymaking and the history of haymaking practices, implements and machines and their mechanisation in the last century or so. 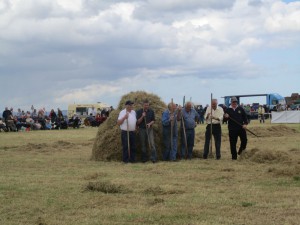 The weather couldn’t have been better suited to a day of haymaking activities.  It was perfect – a bright sunny day with a drying breeze.  But there was a reminder that this was haytime: as the balers were about to enter the parade ring heavy spits of rain started to fall.  The runup to the day wasn’t, however, easy: don’t ask the rally organisers about the preceding week’s weather, a late silage crop and a rally reorganization from one part of Fife toanother.  That week will go down as a chapter in the Club’s history.  But so too will the successful hay-making display.

The oldest implements on the field were a tumbling tam, first introduced into Scotland from America in 1828, and a Jack & Sons Ltd of Maybole Caledonian buckeye mower – a popular model in its day at the turn of the twentieth century; perhaps the most recent was a New Holland B8980 large square baler.  The story was told through 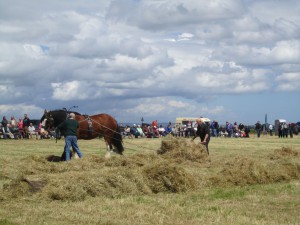 two elements – parades of implements and machines around a show ring and a static display comprising an 1898 Marshall traction engine from the Cook’s from Leven, powering a Jones stationary baler from John Rennie of Carnoustie.  Dave and Robert Nelson, Ross Kinnaird, Benny and Isobel Duncan and their helpers, together with the Cooks of Leven and John Rennie, put on a comprehensive display that would not have been seen in Scotland for many decades.  Many spectators would not have ever seen such a sight.

There was a comprehensive range of mowers, both finger-bar and rotary.  There was a knack to cutting with the finger-bar ones – the hay had to fall over the bar.  If it didn’t, then cutting was difficult and you could make a rare mess – there were plenty of times you had to jump off the tractor to un-choke the mess and spread it out.  And you had to watch the wee birds hiding in the hay as well!

Hay turning devices were exhibited in all shapes and forms and included side rakes, swath turners and tedders.  Its amazing how many different ways and times the hay was turned over and moved around a field.  There were collecting and transporting devices such as the tumbling tam, horse rake, hay sweep as well as a hay bogie.  These were augmented by a catalogue entry of 33 balers, mostly square balers (though none so old to have an independent engine instead of a P.T.O  which did have some advantages as “you could stop and ease a bit into the baler mouth”), though there were also round ones (though not in abundance), as well as a buncher.

Some of the most important makers of haymaking implements and machines were represented as were key implements that shaped the technology of the hay field.  They included household names in hay-making equipment: the famous Dickie hay turner from William Dickie & Sons of East Kilbride (later from Massey Harris) (Dickie was “king of them all”), Bamfords’ wuffler, Lely’s Cock Pheasant and Vicon’s Acrobat.  Balers included those from makers such as Allis-Chalmers, David Brown Albion, Claas, New Holland, International Harvester, Krone, and Massey Ferguson.  Their display suggested that there was a strong presence of Massey and International in the rally district.  Western Midlothian where we were was a New Holland district.  But then again, as my father says, the New Holland balers were so successful that they “took over the whole country”.

The practical displays demonstrated the great technological advances that have taken place within the last century to secure a labour-intensive crop as efficiently and effectively as possible.  The comparison in the work of the tumbling tam and the hay sweep could not have provided a greater contrast.  Likewise, so did the 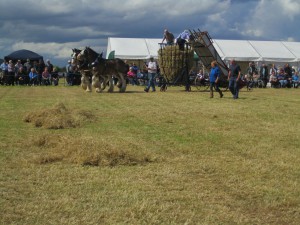 demonstration of ruck making and the use of the green crop loader and pike maker exhibited by B. Allan of Silloth, which must have been revolutionary in its day.  These ruck makers were still being made in the 1950s.

Specific machines also demonstrated the need to speed up the ‘making’ of the hay.  Mr D. Leech brought a New Holland hay crimper all the way from Lincoln.  This could greatly reduce the time the drying grass was in the swathe.  But not all farmers would have one: it effectively “smashed up” the hay and if a crimped crop was rained on it turned into “dung’”  Another innovation was the Lister hay-drying fan exhibited by E. Crichton of Ceres. 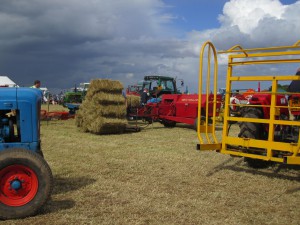 Haymaking was an activity that had many local and regional variations.  Some of these were especially noticeable to spectators from outwith the rally area.  They included words of things – was a ruck always a ruck? what was a pike?  what was a sow stack? or a Paisley bend?  Variations included the making of a ruck without a tripod (the ruckmakers themselves commented on this).  There were also locally made bale handling devices, such as those from Boswells of Blairgowrie (a pyramid bale sledge) and S. Koronka of Kinross (formerly Ceres) with a small mounted bale carrier.  The timothy men of the Carse of Stirling also had their own ones too; they had small waterproof hoods on the top of their bales.These local variations continued in the face of the internationalisation of the manufacture and sale of agricultural implements and machines.

Scottish makers were especially noted in the displays of horse-drawn implements, some of which were famed for their manufactures (such as Dickie’s hay turner) while the tractor-powered turners and balers were made by English, Welsh and international makers.  One of the Scottish makers, W. & A. Pollock of Mauchline did, however, make a stationary baler at one time.

A lasting thought of the rally was that while implement and machine makers have made significant technological changes, some of which have been revolutionary in changing the appearance of the hay field, it is still the weather that is the master of the hayfield.  As the saying goes, “make hay while the sun shines”.  All the technology in the world won’t help when it is raining on a cut crop.  It might just help to dry it out though.

Further details of the rally and pictures of haymaking implements and machines are on the Club’s website.

Further reminiscences of haymaking are told by Robert Holmes are on Tobar an Dualchais.