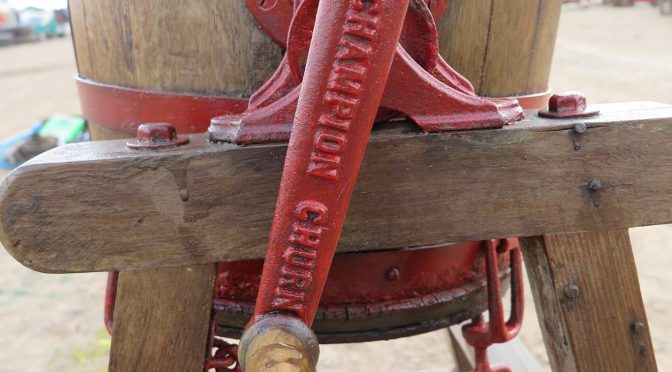 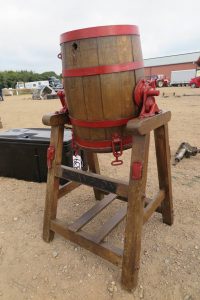 If you were a dairy farmer in Scotland in the 1890s you would have purchased your churns from a number of businesses.  They included Walker & Templeton, Kilmarnock, Alexander Jack & Sons Ltd, Maybole, Dairy Supply Co. Limited, Edinburgh and London, Andrew Wilson, Lanark, Charles Weir, Strathaven, and Willian Sinton Jedburgh.  A number of English firms also had a strong foothold in the country. They included Waide & Sons Ltd, Leeds, and Melotte Separator Sales Co., Bristol.

One Scottish firm was especially eminent: William Sinton, Jedburgh.  In 1893 the North British Agriculture wrote on his character and reputation:

“Mr William Sinton-To the quiet little border town of Jedburgh belongs the honour of producing, in the person of Mr Sinton, the principal maker of barrel churns in Scotland.  Brought tuna s a cooper to trade, ex-Bailie Sinton has devoted the best part of a lifetime to the manufacture and improvement of churns, and any one who meets him in a showered soon finds out that he is a 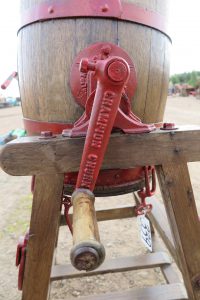 practical man, thoroughly well versed in “chronology”.  The large number of new sorts and sizes of churns which he regularly brings out at every Highland Show will convince one that it is true of churns, as well as of books an sermons, that of making of them “there is no end”.  Mr Sinton, however, seems to have made a hit in his latest invention called the Waverley end-over oval barrel churn. By making an oval churn rotate on the moveable end-over-end principle, and fitting the same with diagonal dashers, so many counter currents are originated that butter of the finest quality “comes” in about a third of the time that it takes with the usual barrel pattern, and that with a less expenditure of labour.  Some two or three years ago Mr Sinton invented and patented a strainer glass eyelet and ventilator combined, by means of which the progress of butter formation is observed without stopping to remove the bung, which ensures the butter milk being strained off at the proper moment, thereby securing the whole of the butter,and that of good quality keeping. Mr Sinton’s works have been greatly enlarged to meet the demands of his trade.  He is held in high esteem in his native town in Roxburghshire.”

The photographs are of an end-over-end barrel churn made by Dairy Supply Co. Limited, at the Scottish National Tractor Show, Lanark, September 2015.