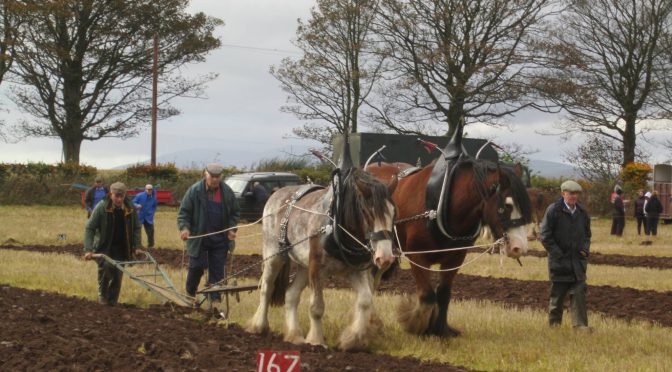 Ploughing matches have been held in Scotland since the late eighteenth century.  One of the earliest matches was held in Alloa in 1784.  The Highland and Agricultural Society of Scotland gave early encouragement to matches – and still does – through the awarding of premiums to ploughmen.  The first ploughing match at which the Society gave awards to was held on 7 November 1801 on the Hoddam estate. 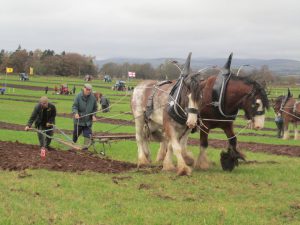 Ploughing matches played an important role in developing the skill and technique of ploughing, encouraged a competitive spirit among ploughmen (and plough women), and also stimulated improvements in plough design.  Some plough makers had their own range of competition ploughs: in the mid 1850s Gray & Co, Uddingston, boasted of the awards gained by its competition ploughs.

Henry Stephens, the celebrated agricultural writer, wrote on ploughing matches in 1889.  He provides a number of insights into them:

“Ploughing matches – Although differences of opinion exist as to the usefulness of ploughing-matches, it can hardly be doubted that since their institution the skill of our ploughmen has risen considerably; not but that individual ploughmen could have been found before as dexterous as any of the present day.  This improvement is not to be ascribed to the institution of ploughing-matches alone, for, no doubt, superior construction of implements, a better kept, better matched, superior race of horses, and superior judgement and taste in field labour in the farmer himself, have been potent elements in influencing the handicraft of ploughmen. …

How ploughing matches are conducted – Ploughing-matches are generally very fairly conducted in Scotland.  They usually take place on lea ground, the ploughing of which is considered the best test of a ploughman’s skill, though drilling is perhaps quite as difficult of correct execution.  The best part of the field is selected for the purpose, and the same extent of ground is allotted to each competitor.  A peg, bearing a number, is fixed in the ground at the end of each lot, which are as many as ploughs entered in competition.  Numbers on slips of paper corresponding to those on the pegs, are drawn by the competing ploughmen, who take the lots as drawn.  Ample time is allowed to finish the ploughing of each lot. Although quickness of time in executing the same extent of work is not to be compared to excellency of execution, it should enter as an element in deciding the question of skill; but this it seldom does at ploughing-matches.  Each competitor is obliged to “feer” his own lot, assort and guide his own horses and trim his plough-irons, without assistance.
Judges at ploughing matches – The judges are brought from a distance, so that they can have no personal interest in the exhibition, and in some cases have been requested to inspect the ground after all the ploughs have been removed, having been kept away from the scene during the time the ploughs were engaged.  This appears to be an objectionable part of the arrangements, which is made on the plea that, were the judges to see the ploughs at work, some particular ones might be recognised by them as belonging to friends, and their minds might thereby be biased in their favour. Such a plea is a poor compliment to the integrity of a judge; and any farmer who 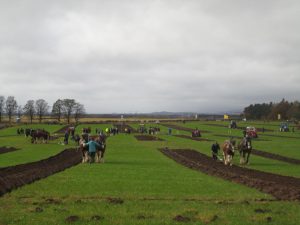 accepts that responsible and honoured office, that would allow himself to be influenced by so pitiful consideration, would deserve not only to be objected to on every such occasion, but banished out of society.  One consequence of the exaction of this rule is, loss of patience by the spectators, while the judges are occupying no more than the necessary time for deciding the ploughing of, it may be, a large extent of ground.  The judges ought to be present all the time of the competition, when they could leisurely, calmly, and minutely ascertain the position and depth of the furrow-slices, and mature their thoughts on points which might modify first impressions. Inspection of the finished surface cannot furnish information whether the land has in all respects been correctly ploughed, which can only be obtained by comparing the soles of the furrows while the land is being ploughed.  There is something to be gained in observing the manner in which the ploughman guides his horses in making the best work in the shortest time.”

Some aspects of the ploughing match have changed, while others have remained the same.

The photographs were taken at the Scottish Ploughing Championships, 2014.