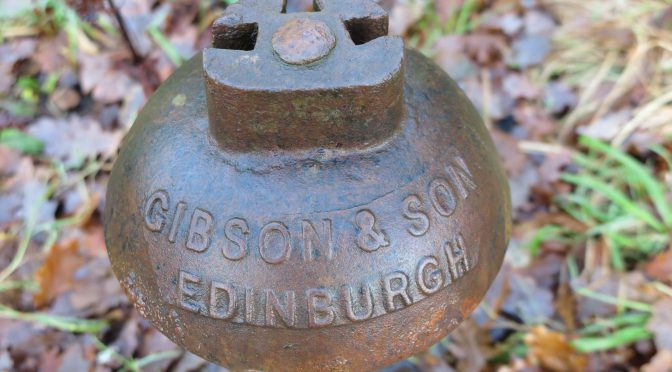 Scotland was an important centre for the manufacture of corn rick stands. 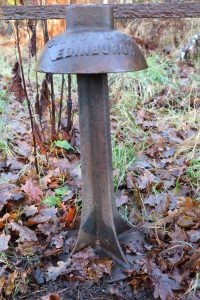 In the early 1870s T. Pearson & Co., Waterloo Iron Works, Glasgow, claimed that it was the “largest Makers in the world of the Corn Rick Stand.”  It asserted that “T. Pearson & Co. made only one quality of their Prize Rick Stands, and that quality is known universally to be the Cheapest, the Strongest, and most perfect in the market.”

Its pillars were “Cast-Iron, very massive, with a Cap, at the top, of a mushroom shape, to exclude vermin, and stand about 27 inches above the ground.  The Framework on the top is entirely of Wrought-Iron, of a most substantial character, with all the bars dovetailing into the Pillars; and the whole is fitted together in the most simple manner, without a single Bolt or Pin, so that all the Bars and Pillars fit universally.  The Stands-18, 20, and 22 feet diameter-have an inner row of Pillars.”

“An important distinction in the make of these Stands, and which accounts accounts for their great efficiency and durability, consists in the Bars of the Framework being made of a much heavier size of iron than is usual; also, in their being made to dovetail into the notches on the top of the Pillars, a plan which secures the whole Stand being tightly bound together, and therefore imparts to it a greater strength and solidity.”

While most stands were round, Pearson also made oblong stands. The company notes: 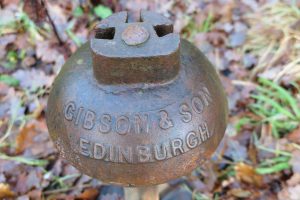 “To met the requirements of certain districts of the country, T. Pearson & Co. can confidently recommend this peculiar form of Rick Stand, as combining a strength and firmness of construction that cannot be obtained by any other principle. All the Bars in the Framework dovetail into the Pillars; and they not only can be put up or wholly removed at pleasure, but likewise every six feet in length of the Rick Stand can be taken away as the grain is removed, so as to allow the carts to back close up to the remaining portion of the stack.

“This form of stand is found equally suitable for Wheat, Barley, or Oats. No screw, bolt, or pin being required, it can be put up or taken down by a farm-servant in a few minutes.  Premiums have been awarded it by the principal Agricultural Meetings throughout the Kingdom, and numerous and flattering Testimonials have been received, commending its great utility and cheapness, while urging earnestly its adoption by the Farming interest generally.
Another advantage peculiar to this form of Stand is the important one, viz:-that it can be made of any size.  The smallest Stand of 10 feet by 8 feet can be continued, if wished, in an unbroken line for 100 feet, or for any longer or shorter distance; and the larger sized ones can be thrown into two or more of a smaller dimension, at any future time, if necessary, or vice versa.  T. P. & Co. send the necessary Pillars where this arrangement may be desired, at a small extra cost.”

Pearson noted that the advantages of the corn rick stands was: 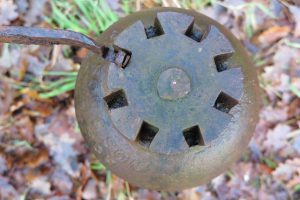 “They afford a Perfect protection from the ravages of Vermin-insure a Thorough Ventilation throughout the Stack-preserve the Grain from Damp-secure to the Farmer the great advantage of Early Stacking-give a much Drier Sample, from the superior Ventilation effected-save the Waste-occasioned by stacking on the ground-act as a prevention against Fire-save to the Farmer from £15 to £25 every year, where twelve of the smallest-sized-ones are used-are most valuable as an Investment, giving the Purchaser, on an average, nearly Forty per Cent, annually on his First outlay-have in numerous instances paid themselves in One Year-are Cheaper than any description of Stone or Wooden Stand-will last for an age, if Painted occasionally-and finally, can be put up or taken down in a few minutes by any Farm-Servant.”

So Pearson’s corn stands and stands had plenty of advantages for the Scottish farmer!

The photographs of the Gibson & Son of Edinburgh Pillars were taken in Ross-shire, December 2015.  They are made on a similar principle to those of Pearson’s prize patent corn rick stands.  The include a centre stack and one of the edge stacks.